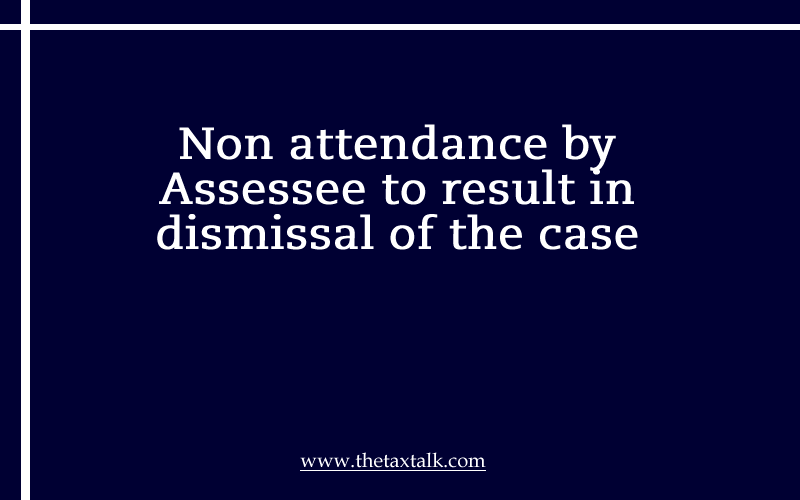 “The appeal does not mean merely filing of the appeal but effectively pursuing it.”

2.In the case of Estate of late Tukojirao Holkar vs. CWT; 223 ITR 480(M.P.) while dismissing the reference made at the instance of the assessee in default made following observation in their order :

“If the party, at whose instance the reference is made, fails to appear at the hearing, or fails in taking steps for preparation of the paper books so as to enable hearing of the reference, the court is not bound to answer the reference.”

3.In the case of Commissioner of Income-tax vs. Multiplan India (P) Ltd.; 38 ITD 320 (Del), the appeal filed by the revenue before the Tribunal, which was fixed for hearing.  But on the date of hearing nobody represented the revenue/appellant nor any communication for adjournment was received. There was no communication or information as to why the revenue chose to remain absent on that date. The Tribunal on the basis of inherent powers, treated the appeal field by the revenue as un- admitted in view of the provisions of Rule 19 of the Appellate Tribunal Rules, 1963.”

This decision was pronounced in the open court soon after the conclusion of hearing on 19.12.2011.

Unauthorised sale of company’s land by a director, cannot be considered as unaccounted money: ITAT

Common Penalties for defaults in the Income Tax Law: An Overview

Capital gains: Whether AO has power to refer the matter to DVO and deny the valuation report as on 1-4-1981 of a registered valuer?

Any Contravention of sections 269SS and 269T if Cash is received by assessee from Commission Agent against the crops?

No interest u/s 234B & 234C if the tax liability arises due to retrospective amendment of law: Calcutta HC

Get Ready for Favourable Judgment : Rajasthan HC notice to the Income Tax Department against Post Demonetisation addition done prior to 15th Dec 2016 (i.e., the effective date of amendment in section 115BBE)

In case for repayment of loan to the assessee, there is no requirement on the part of assessee to prove the source of funds.

Whether the facts and circumstances in case of Baroda Cricket Association the Tribunal was justified in allowing the benefit of exemptions u/s.11 and 12 of the Income Tax Act,1961.

Landmark Judgment: Assessee opting for presumptive income scheme is not under any obligation to explain individual entry of cash deposit in bank

Assumption of jurisdiction u/s 147 cannot be sustained and is held as invalid in eyes of law.