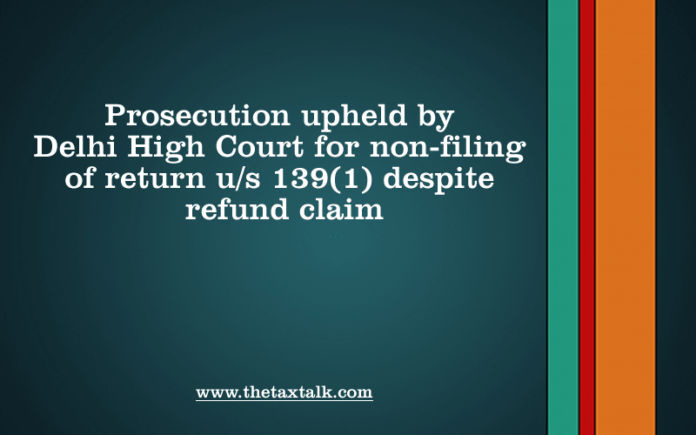 Sec. 276CC of the Income Tax Act provides that if a person wilfully fails to furnish in due time the return of income which he is required to furnish u/s 139(1) or by notice given under clause (i) Sec. 142(1) or Sec. 148 he shall be punishable with imprisonment. However, the proviso statess that  a person shall not be proceeded against under this section for failure to furnish in due time the return of income u/s 139(1) if (a) the return is furnished by him before the expiry of the assessment year; or  (b)the tax payable by such personon the total income determined on regular assessment does not exceed Rs. 3000.

Delhi HC in TS-595-HC-2018(DEL)  has upheld Trial Magistrate’s order framing prosecution charges on assessee u/s 276CC for non-filing of return before due date u/s 139(1) and failure to comply with notice u/s 142(1) for AY 2003-04 to 2005-06, directs parties to appeal before Trial Court on October 15th; Citing proviso to Sec 276CC, assessee had challenged the order framing charges on the ground that there was no tax payable for AY 2004-05 and 2005-06, but rather he was entitied to refund; Noting that Sec. 276 CC makes failure to furnish returns of income punishable, HC relies on SC ruling in Sasi Enterprise Ltd. wherein it was held that proviso cannot control the main section but only provides some benefit to certain classes of assessees, remarks that “The assessment proceedings are not related to these criminal prosecutions. They may eventually have a bearing for the benefit of proviso to Section 276CC to be invoked but not so as to inhibit continuation of the criminal process”; Further regarding AY 2003-04, sets aside the Revisional Court’s order which accepted assessee’s contention that since notice u/s 142 (1) was followed by a fresh notice and in absence of such notice indicating date by which compliance was to be made, the assessee could not have been found to be in breach of the statutory obligation; Holds that “the subsequent notice cannot prima facie be read so as to supersede the previous notice, observes that subsequent filing of return also cannot impact earlier liability for proseuction on account of failure to furnish return within stipulated period.”:HC

The ruling was delivered by Justice R.K.Gauba.

Advocates J.S Bakshi and A.S Bakshi argued on behalf of the assessee while Revenue was represented by Senior Standing Counsel Zoheb Hussain along with Mr.Deepak Anand.

Taxpayer need to be cautious in filing the return even if there is refund claim.

Stamp duty and registration charges for execution of lease deed is...

Stamp duty and registration charges for execution of lease deed is...