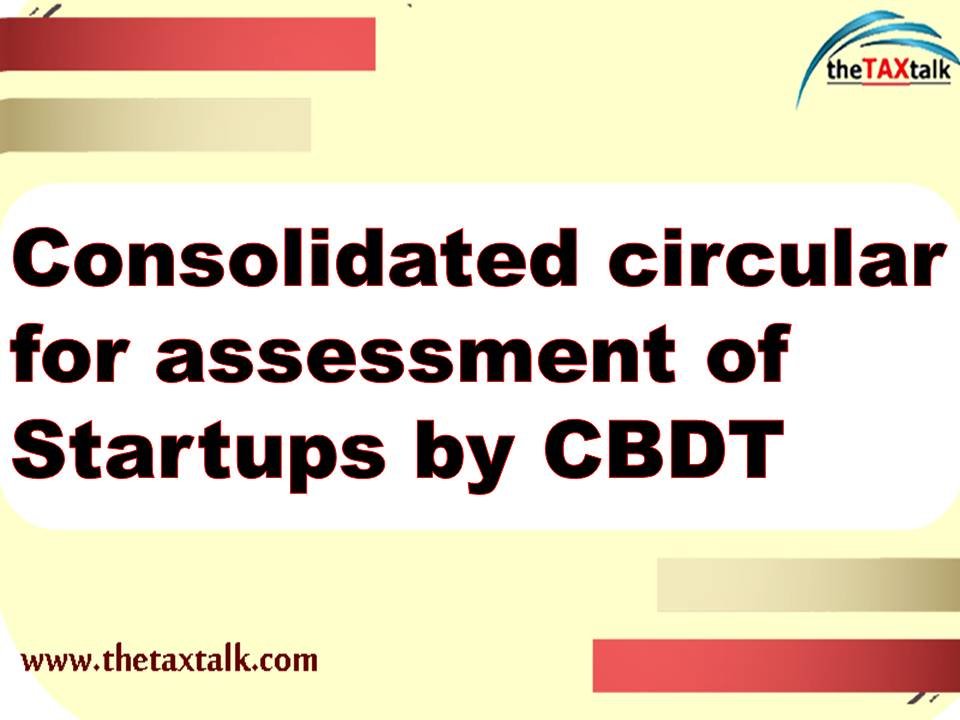 In order to provide hassle-free tax environment to the Startups, a series of announcements have been made by the Hon’ble Finance Minister in her Budget Speech of 2019 and also on 23rd August, 2019. To give effect to these announcements, the Central Board of Direct Taxes (CBDT) has issued various circulars/clarifications in the matter. This circular consolidates all these circulars and further clarifies as under:-

The circular No. 16/2019 dated 7th of August, 2019 provided for the following procedure for pending assessment of the Startups:-

iii. In case of Startup Companies recognized by the DPIIT, which have not filed Form No. 2, but have been selected for scrutiny, the inquiry in such cases also will be carried out by the Assessing Officer only after obtaining approval of the supervisory authorities.

3. Time limit for Completion of pending assessments of the Startups

The clarification issued on 9th August,2019 provided that the provisions of the section 56(2)(viib) of the Act shall also not be applicable in respect of assessment made before 19th February, 2019 if a recognised Startups has filed declaration in Form No. 2. The following procedure is laid down with regard to addition made under section 56(2)(viib) of the Act in assessment order passed before 19th February, 2019:-

In order to redress grievances and to address various tax related issues in the cases of Startups, a Startup Cell is constituted on 30th August, 2019 with the following ex-officio members:-

compliance calender for the month of February Inbox

Empanelment of Chartered Accountant firms/LLPs for the year 2020-2021

Introduction of a new type of semi-closed Prepaid Payment Instrument (PPI) – PPIs upto ₹ 10,000/- with loading only from bank account

Go Live of SAP based Filing of Appeal Applications under MVAT and CST Act Dated 30.11.2019

Advisory on Exhibit B3 of SEBI’s Circular dated 29th March 2019 regarding Procedure and formats for limited review / audit report of the listed entity and those entities whose accounts are to be consolidated with the listed entity.

Conditions on tax compliances of undisclosed foreign income and assets