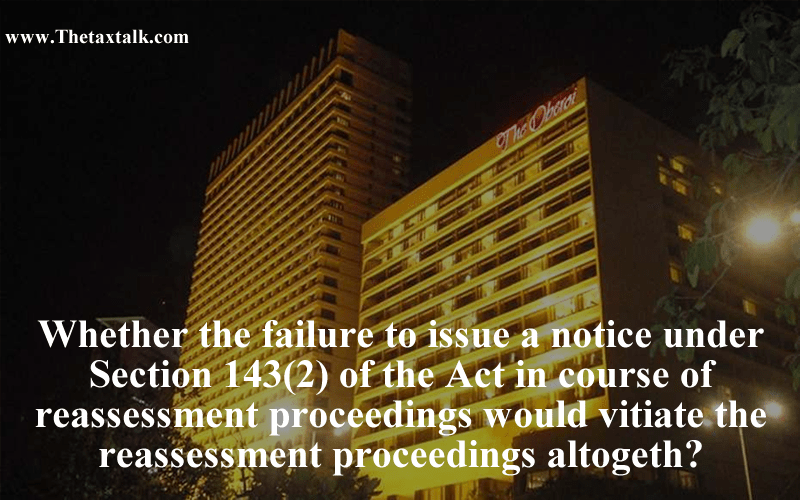 The Court : The substantial questions of law that have arisen are in the context of reassessment proceedings initiated under Section 147 of the Income Tax Act, 1961 pursuant to a notice under Section 148 thereof.

The Supreme Court judgment in Hotel Blue Moon has first to be referred to since such judgment still holds the field. In course of a block assessment when the Assessing Officer repudiated the return filed by the assessee but failed to issue any notice under Section 143(2) of the Act within the prescribed period of time, the Supreme Court held, at paragraph 15 of the judgment, inter alia, as follows:-

It is evident that the dictum of the Supreme Court in Hotel Blue Moon is that a notice under Section 143(2) is mandatory if the return as filed is not accepted and an assessment order is to be made at variance with the return filed by the assessee. It is also evident that the issue is not limited to block assessment but would apply to every case where a notice under Section 143(2) of the Act is necessary. In the judgment and order of the Appellate Tribunal impugned herein dated May 14, 2015, the Tribunal noticed a judgment of this Court of April, 8, 2014 rendered in ITAT 149 of 2013 (Commissioner of Income Tax v. Humboldt Wedag India Pvt. Ltd.) where this Court had expressed an opinion that when an order of assessment was passed in course of reassessment under Section 143(3) of Act, “The omission could have been a reason for setting aside the order of assessment, but that could not have been a reason, in the facts and circumstances of this case, for nullifying the exercise under section 147of the Income Tax Act.”

Such view taken by this Court in Humboldt Wedag India Pvt. Ltd was without noticing the Supreme Court judgment in Hotel Blue Moon. The relevant Bench also did not take into consideration a previous order of this Court of April 4, 2013 when the reassessment proceedings were quashed merely on the ground that no notice under Section 143(2) of the Act was issued to the assessee before making the reassessment. It is necessary to see the short order of April, 4, 2013 passed in ITAT 27 of 2013 (CIT v. I. S. Leather):

“Admittedly, no notice under section 143(2) of the I.T. Act was issued to the assessee before making the re-assessment. The learned Tribunal, relying on the judgment in the case of ACIT -vs- Hotel Bluemoon, reported in (2010) 321 ITR 362 (SC) and the judgment in the case of CIT-vs- C. Palaniyappan, reported in (2006) 284 ITR 257 (Madras), opined that the re-assessment was without jurisdiction and was, therefore, quashed. It is against this order that the revenue has come up. “We find no infirmity in the order under challenge. The appeal is as such dismissed.”

Section 148 of the Act permits the issuance of a notice in certain circumstances when it is discovered that income has escaped assessment and sub-section (1) thereof mandates a return to be filed upon an assessee being served a notice under such provision, whereupon “the provisions of this Act, shall, so far as may be, apply accordingly as if such return were a return required to be furnished under Section 139.”

In the light of the above discussion, particularly taking into consideration the law laid down by the Supreme Court in Hotel Blue Moon, it is inescapable that the issuance of a notice under Section 143(2)of the Act is mandatory if the Assessing Officer seeks not to accept any part of the return as furnished by the assessee or make an assessment order contrary thereto and, even in course of reassessment proceedings, such notice cannot be dispensed with.

Apropos the second question framed above, it is necessary that Section 292BB of the Act be noticed in its entirety:

“292BB Notice deemed to be valid in certain circumstances – Where an assessee has appeared in any proceeding or cooperated in any inquiry relating to an assessment or reassessment, it shall be deemed that any notice under any provision of this Act, which is required to be served upon him, has been duly served upon him in time in accordance with the provisions of this Act and such assessee shall be precluded from taking any objection in any proceeding or inquiry under this Act that the notice was –

(a) not served upon him; or

(b) not served upon him in time; or

(c) served upon him in an improper manner:

Provided that nothing contained in this section shall apply where the assessee had raised such objection before the completion of such assessment or reassessment.”

Even if the provision does not carry a non-obstante clause, since Section 292BB is a provision of general application, it would be applicable in all situations; but only in so far as it proclaims to operate. Section 292BB of the Act, read in the context of several provisions of the Act which mandatorily require notices to be issued in divers situations, cannot be said to have dispensed with the issuance of such notices altogether. Section 292BB must be understood to cure any defect in the service of the notice and not authorise the dispensation of a notice when the appropriate interpretation of a provision makes the notice provided for thereunder to be mandatory or indispensable.

This is not a case where the assessing officer says that a notice had been issued and there is a contradiction thereof by the assessee. It is evident that the assessee carried the objection before the Commissioner (Appeals) and the Commissioner brushed aside the objection on the ground that it was a technicality without addressing the issue or applying his mind to such aspect of the matter. Further, it is evident from the order impugned passed by the Appellate Tribunal that no notice under Section 143(2)of the Act had, in fact, been issued in this case. In such a situation, where a notice that is mandatorily required to be issued is found not to have been issued, Section 292BB of the Act has no manner of operation.

(2) Section 292BB of the Act does not dispense with the issuance of any notice that is mandated to be issued under the Act, but merely cures the defect of service of such notice if an objection in such regard is not taken before the completion of the assessment or reassessment. In addition, it is held that in the light of the Supreme Court dictum in Hotel Blue Moon, the view expressed in Humboldt Wedag India Pvt. Ltd is per incuriam and, as such, not good law.

There will be no order as to costs.