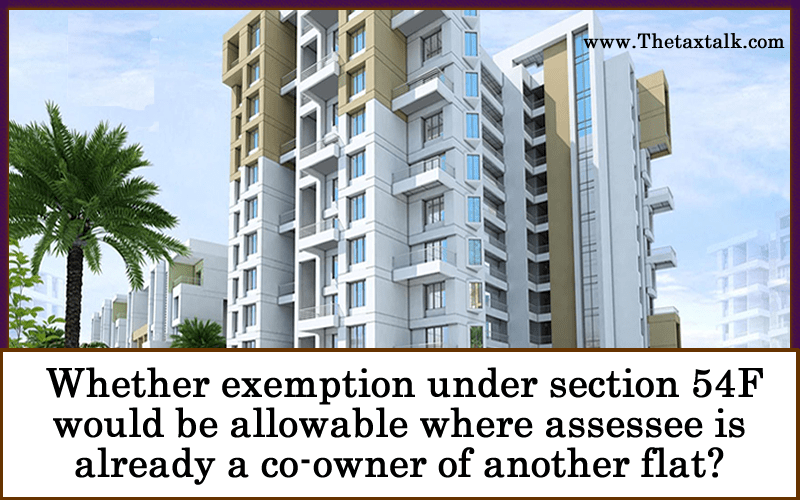 The word ‘own’ appearing in section 54F includes only such residential house which is fully and wholly owned by one person and not a residential house owned by more than one person. The assessee was already a co-owner of another flat. Being a co-owner, assessee was not the absolute owner of another residential flat, and exemption under section 54F could be denied on this ground. [ITO vs Rasiklal N. Satra [2006] 98 ITD 335 (Mum.-ITAT)]

1. The only issue arising in this appeal relates to assessee’s claim for exemption Under Section 54F of the Income Tax Act, 1961 (Act).

2. Briefly stated, the facts are that assessee declared capital gain of Rs. 6,68,698/- on sale of shares and claimed exemption Under Section 54-F by investing the same in purchase of residential flats at Vashi, Navi Mumbai. In the course of assessment proceedings, it was noticed by the Assessing Officer that assessee was co-owner of a flat in Sion (West), Mumbai. Accordingly, assessee was asked to explain as to why exemption Under Section 54F be not denied. In reply, the assessee contended that he was not an independent owner of the house and exemption can be denied only where assessee is absolute owner of the house. He also filed details of purchase of the house which showed that he along with his wife had purchased the house on 13.4.1994 for a total consideration of Rs. 3,05,000/- out of which assessee had invested Rs. 1,60,000/- and balance amount was invested by his wife. The copy of sale deed also showed that it was being purchased in joint ownership. However, the Assessing Officer did not accept the contention of assessee since in his view, assessee could be said to be the owner of house at Sion (Mumbai) on the date of sale of original asset. Accordingly, he denied the claim of assessee Under Section 54-F.

3. On appeal, it was contended before the Learned CIT (Appeals) that shared interest in the property does not amount to ownership of the property. Reliance was placed on the following decisions:-

4. The Learned CIT (Appeals) accepted the contention of assessee and consequently allowed the claim of assessee. Aggrieved by the same the Revenue is in appeal before the Tribunal.

5. Both the parties have been heard at length. The gist of the arguments of the assessee’s Counsel is that shared interest in the property does not amount to ownership of a residential house in terms of Section 54-F. According to him, a co-owner of a house cannot be said to be an owner of a house. He also drew our attention to the provisions of Section 26 of the Act to point out property owned by co-owners is to be assessed in the status of “Association of Persons” (A.O.P) unless their shares are definite and ascertainable. He argued that such shares are not defined in the present case and as such, no part of house can be said to be owned by assessee. It is a case of joint ownership where income chargeable to tax has to be assessed in the status of A.O.P. only. In support of his arguments, he relied on various judgments reported as 216 ITR 367 (Bom.), 181 ITR 101 (Mad.), 132 ITR 150 (Cal.) and 5 ITR 584 (SC). On the other hand, the Learned Departmental Representative has relied on the order of the Assessing Officer.

6. Rival submissions have been considered carefully. The question for our consideration is whether, on facts, assessee can be said to be the owner of the residential house vis-a-vis flat at Sion, Mumbai. The case law referred to by the assessee’s Counsel is not on the point of issue before us and, therefore, we proceed on the basis of language employed by the legislature. The word “residence”, as per Stroud’s Judicial Dictionary, means a place where an individual or his family eat, drink and sleep. So a residential house would mean a building or part of the building where one can eat, drink and sleep. Here, we may clarify that house is not being equated with a building since a building may comprise of many houses. So house means an independent unit where one can eat, drink and sleep. In view of this definition, we hold that flat at Sion, Mumbai, was a residential house since assessee along with his family was living in that house.

7. The only question remains as to whether assessee can be said to be the owner of that residential house. The legislature has used the word “a” before the words “residential house”. In our opinion, it must mean a complete residential house and would not include shared interest in a residential house. Where the property is owned by more than one person, it cannot be said that any one of them is the owner of the property. In such case, no individual person of his own can sell the entire property. No doubt, he can sell his share of interest in the property but as far as the property is considered, it would continue to be owned by co-owners. Joint ownership is different from absolute ownership. In the case of residential unit, none of the co-owners can claim that he is the owner of residential house. Ownership of a residential house, in our opinion, means ownership to the exclusion of all others. Therefore, where a house is jointly owned by two or more persons, none of them can be said to be the owner of that house. This view of ours is fortified by the judgment of the Hon’ble Supreme Court in the case of Seth Banarsi Dass Gupta v. CIT 166 ITR 783, wherein, it was held that a fractional ownership was not sufficient for claiming even fractional depreciation Under Section 32 of the Act. Because of this judgment, the legislature had to amend the provisions of Section 32 with effect from 1.4.1997 by using the expression “owned wholly or partly”. So, the word “own” would not include a case where a residential house is partly owned by one person or partly owned by other person(s). After the judgment of Supreme Court in the case of Seth Banarsi Dass Gupta (supra), the legislature could also amend the provisions of Section 54-F so as to include part ownership. Since, the legislature has not amended the provisions of Ejection 54-F, it has to be held that the word “own” in Section 54-F would include only the case where a residential house is fully and wholly owned by assessee and consequently would not include a residential house owned by more than one person. In the present case admittedly the house at Sion, Mumbai, was purchased jointly by assessee and his wife. It is nobody’s case that wife is benami of assessee. Therefore, the said house was jointly owned by assessee and his spouse. In view of the discussions made above, it has to be held that assessee was not the owner of a residential house on the date of transfer of original asset. Consequently, the exemption Under Section 54-F could not be denied to assessee. The order of the Learned CIT (Appeals) is, therefore, upheld.

8. In the result, the appeal of the Revenue stands dismissed.

Pronounced in the open Court on this 19th day of September, 2005.