When there is no provision to fasten tax liability upon deceased individual, it is impossible for Revenue to impose tax on legal representatives: HC 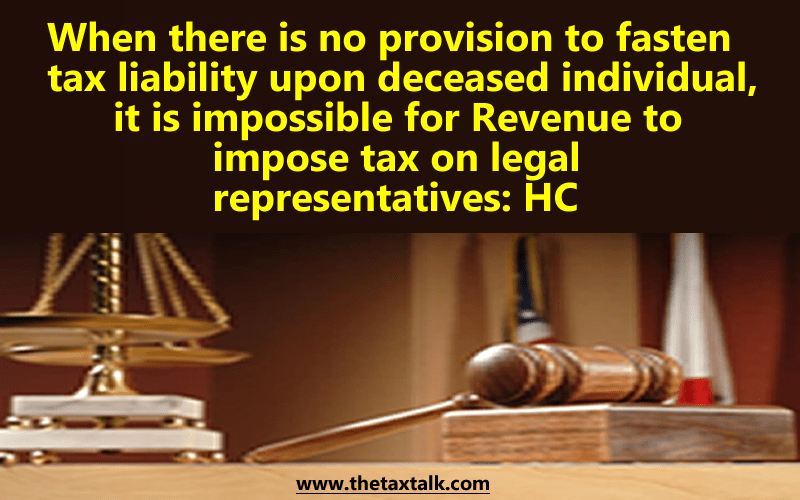 When there is no provision to fasten tax liability upon deceased individual, it is impossible for Revenue to impose tax on legal representatives: HC


The present petition had been filed by the husband of the deceased assessee i.e., his wife, seeking directions to quash notice issued u/s 148 to the deceased assessee, late Smt. Rukmani Sehgal and to prohibit the AO from conducting proceeding for re-assessment in any manner. In the background, it was explained that the deceased assessee had filed her income tax returns and continued to do so, till her death. The return for AY 2010-2011 was processed in a routine manner and the deceased assessee was intimated about it, after which she died. Consequently thereupon, reassessment notice was issued u/s 148 to the said deceased. The present assessee being a legal representative of the deceased, sought a copy of the “reasons to believe”. In response, it was pointed out that the deceased had shown some transactions which led to a claim for losses brought forward, pertaining to one Varun Capital Services Limited. The present assessee protested that this was not correct.. However, rejecting the objections, the AO issued a clarification, ostensibly “clarifying” that the entity from which the deceased had received the amounts and claimed losses was different, and that the original “reason to believe” contained a typographical error.

The assessee therefore approached this court, seeking the reliefs that she has claimed, primarily on three grounds: firstly, the Act did not provide any mechanism for issuing and carrying on reassessment in respect of a dead person, if the reassessment notice is issued against a deceased. It was urged, secondly, that the “clarification” issued camouflages the fact that the so called “reasons to believe” was not based on application of mind and was also premised on no reason. The third ground was that the AO completed the reassessment without issuing notice u/s 143(2).

the Division Bench of this Court in case of Vipin Walia,where again the reassessment notice was issued in the name of the deceased and no notice was issued to the legal representative, has held that: “….what was sought to be done by the ITO was to initiate proceedings u/s 147 against the deceased Assessee for AY 2008-09. The limitation for issuance of notice u/s 147 /148 was 31st March 2015. On 27th March 2015, when the notice was issued, the Assessee was already dead. If the Department intended to proceed u/s 147, it could have done so prior to 31st March 2015 by issuing a notice to the LRs of the deceased. Beyond that date it could not have proceeded in the matter even by issuing notice to the LRs of the Assessee….” This court sees no reason to disagree with the decision in Vipin Walia; the summation of the principle applicable, given the plain words of the statute are unexceptionable. The revenue’s argument that the “defect” was curable, in regard to the issuance of notice, to a deceased individual, is, in the opinion of this court, untenable. The phraseology of Section 292BB precludes the contention;

if the original assessee had lived and later participated in the proceedings, then, by reason of Section 292BB, she would have been precluded from saying that no notice was factually served upon her. When the notice was issued in her name- when she was no longer of this world, it is inconceivable that she could have participated in the reassessment proceedings, to be estopped from contending that she did not receive it. The plain language of Section 292BB precludes its application, contrary to the revenue’s argument.. This court is of opinion that the absence of any provision in the Act, to fasten revenue liability upon a deceased individual, in the absence of pending or previously instituted proceeding which is really what the present case is all about, renders fatal the effort of the revenue to impose the tax burden upon a legal representative. On the issue, i.e the fatality attached to the completed reassessment in the absence of a notice u/s 143(2), this court notices that the omission renders the assessment or reassessment,void a proposition of law enunciated in Asstt. CIT v. Hotel Blue Moon – 2010-TIOL-08-SC-IT. In view of the foregoing conclusions, the reassessment notice and all consequent proceedings- including the reassessment order-have to be and are, hereby quashed.