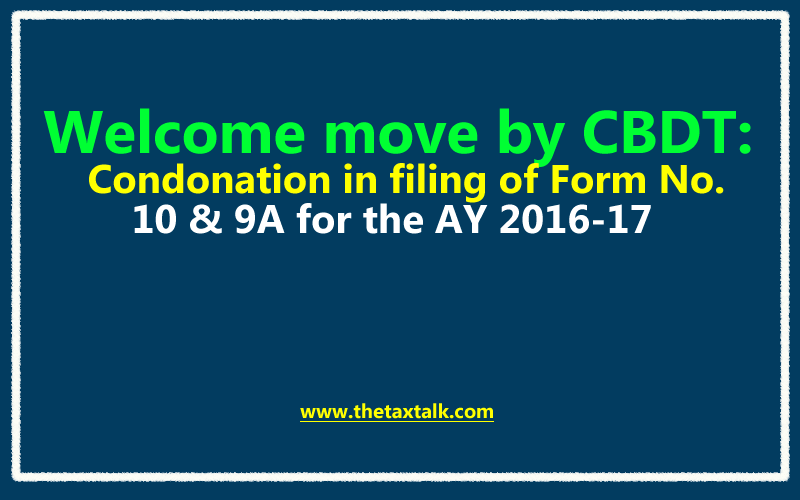 F.No.197/55/2018-ITA-I
Government of India
Ministry of Finance
Department of Revenue
Central Board of Direct Taxes

Under the provisions of section 11 of the Income-tax Act, 1961 ( hereafter Act’) the primary condition for grant of exemption to trust or institution in respect of income derived from property held under such trust is that the income derived from property held under trust should be applied for the charitable purposes in India. Where such income cannot be applied during the previous year, it has to be accumulated and applied for such purposes in accordance with various conditions provided in the section.

The Finance Act, 2015 amended section 11 and section 13 of the Act with effect from 01.04.2016 (A.Y. 2016-17). Consequently, Income-tax Rules, 1962 (hereafter ‘Rules’) were also amended vide the Income-tax (1st Amendment) Rules, 2016. As per the amended provisions of the Act read with rule 17 of the Rules, while 15% of the income can be accumulated indefinitely by the trust or institution, 85% of income can only be accumulated for a period not exceeding 5 years subject to the conditions, inter alia, that such person submits the prescribed Form No. 10 electronically to the Assessing Officer within the due date specified under section 139(1) of the Act.

Further, where the income from the property held under trust and applied to charitable or religious purposes falls short of 85% of the income derived during the previous year for the reason that the income has not been received during that year or any other reason, then on exercise of the option by submitting in Form No.9A electronically by the trust/institution on or before the due date of furnishing the return of income, such income shall be deemed to have been applied for charitable or religious purpose.

Accordingly, in supersession of earlier Circular/ Instruction issued in this regard, with a view to expedite the disposal of applications filed by trusts for condoning the delay and in exercise of the powers conferred under section 119(2)(b) of the Act, the Central Board of Direct Taxes hereby authorizes the Commissioners of Income-tax, to admit belated applications in Form 9A and Form No. 10 in respect of AY 2016-17 where such Form No. 9A and Form No.10 are filed after the expiry of the time allowed under the relevant provisions of the Act.

Under Secretary to the Government of India