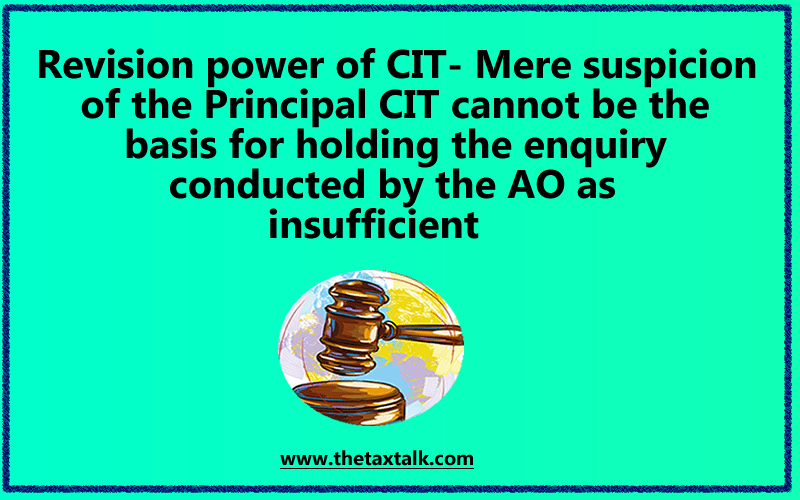 Revision—Erroneous and prejudicial order—Lack of proper enquiry—Principal CIT exercised his revisional power under s. 263 on the ground that the share capital raised by the assessee-company from the Mauritian company by issuing shares at huge share premium was not adequately examined by the AO—Not justified—Identity of the investor company is duly proved by the certificate of incorporation issued as per the laws of that country and the tax residency certificate issued by the Mauritian Revenue authorities, giving the name and address of the investor company and certifying that it is a company incorporated in Mauritius as per its laws and is a resident of Mauritius for income-tax purposes—Genuineness of the transaction is sufficiently established from the copy of return filed with the Registrar of Companies in Form No. 2 and the copy of the share certificates issues to the investor company—Fact that money was genuinely received on account of share capital from the said investor is evidenced by the copy of documents submitted by the remitting and accepting banks to RBI as per the FDI norms governing the impugned transaction—Letter issued by RBI allocating a unique Identification number to the transaction, thus confirming that the transaction is taken on record, further corroborates the genuineness of the transaction—Moreover, the certificate of the chartered accountant certifying the manner of determining the fair market value of shares of the assessee-Company justifies the premium received—No infirmity has been pointed out in the above documents by the Principal CIT—In view of the said documents on record, the AO, was rightly satisfied with the genuineness of the share capital received and there was no reason for the AO to make any further inquiry regarding the investor company—Moreover, the Tribunal has accepted identical documents as sufficient for establishing the genuineness of share application money received from another Mauritian company by the company with which the assessee has subsequently amalgamated, and deleted the addition made on account of share capital for identical reasons that its identity and credibility was not adequately established—Thus, the view of the AO accepting the genuineness of the share capital raised from the Mauritian company can be said to be a plausible view—It is merely suspicion of the Principal CIT that the money received by way of share capital is the unaccounted income of the assessee itself—Mere suspicion cannot be the basis for rejecting the information and documents filed by the assessee and holding them to be insufficient for establishing the genuineness of the transaction—Inquiry conducted by the AO cannot be termed inadequate merely because the Principal CIT suspected the transaction to be tainted—Jurisdiction under s. 263 cannot be assumed for making further inquiries—There has to be a definite finding of error based on material evidences and not on suspicion—CIT cannot remand the matter to the AO to decide whether the findings recorded are erroneous—Further, since adequate inquiries were conducted by the AO regarding the share capital received from the Mauritius company, the order cannot be said to be erroneous even as per Expln. 2 to s. 263—Investor company being a non-resident, the onus to explain the source of the source did not lay with the assessee, as per s. 68—Thus, the AO was not required to inquire into the source of the source and the inquiry could not be said to be inadequate on this count—Principal CIT has not pointed out why any further enquiry was required to be made

Identity of the investor, the genuineness and even the share premium received has been established and justified

No reason remains for doubting the transaction

Impugned order of the Principal CIT is set aside