Purchasing the property in the name of the Assesse is not necessary for Capital Gain Exemption: Delhi HC 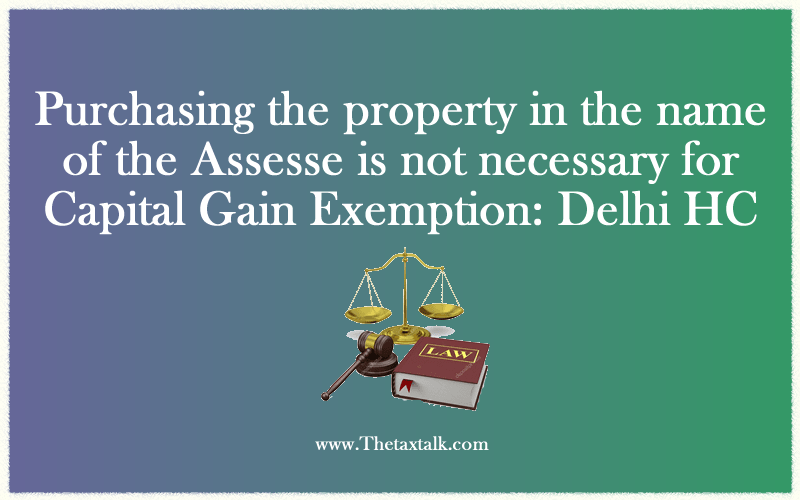 Purchasing the property in the name of the Assesse is not necessary for Capital Gain Exemption: Delhi HC

Section 54F of the Income-tax Act, 1961 – Capital gains – Exemption of, in case of investment in residential house – Ownership of new property -Assessment year 2008-09 – Whether for claiming deduction of capital gains under section 54F, new residential house needs to be purchased by assessee exclusively in his own name – Held, no – Whether, where assessee purchased new house in name of his wife and not in name of any stranger who was unconnected with him, exemption could not be denied, if entire investment had come out of proceeds of old property – Held, yes [Para 9] [In favour of assessee]

N.P Sahni and Ruchesh Sinha for the Petitioner.

2. The appeal is admitted and the following substantial question of law is framed:-

“Whether on the facts and in the circumstances of the case and on a proper interpretation of Section 54F of the Income Tax Act 1961, the Tribunal was right in law in allowing the deduction of Rs. 51,25,100/- claimed by the assessee under that Section?”

3. The assessee is an individual. He retired from IOCL. His income consists of income by way of salary, from house property and other sources. He inherited 50% share in a residential house in E-2/13, Vasant Vihar, Delhi in 2003 from his father. This was in July 1968. The other half share was inherited by his brother. In the year which ended on 31.03.2008, both the brothers jointly sold the property which gave rise to proportionate capital gains in the assessee’s hands. In computing the capital gains, the assessee claimed deduction under Section 54F on the ground that the sale proceeds were invested in the acquisition of a vacant plot for Rs. 31,25,100/- and the purchase of a residential house for Rs. 34,35,700/- in the name of his wife.

6. The revenue preferred an appeal before the Tribunal questioning the decision of the CIT(Appeals). The Tribunal, however, by the impugned order, agreed with the decision of the CIT (Appeals) and in doing so followed the judgment of the Madras and Andhra Pradesh High Courts cited supra and also another judgment of the Karnataka High Court in DIT, International Taxation v. Mrs. Jennifer Bhide [2011] 203 Taxman 208/15 taxmann.com 82. It also noted the judgment of the Bombay High Court in Prakash v. ITO [2008] 173 Taxman 311 in which a contrary view was taken but preferred the view taken by the Madras and Karnataka High Courts adopting the rule laid down by the Supreme Court in CIT v. Vegetable Products Ltd [1973] 88 ITR 192 which says that if a statutory provision is capable of more than one view, then the view which favours the tax payer should be preferred. The Tribunal also observed that Section 54F being a beneficial provision enacted for encouraging investment in residential houses should be liberally interpreted.

7. We have no hesitation in agreeing with the view taken by the Tribunal. Apart from the fact that the judgments of the Madras and Karnataka High Courts (supra) are in favour of the assessee, the revenue fairly brought to our notice a similar view of this Court in CIT v. Ravinder Kumar Arora [2012] 342 ITR 38/[2011] 203 Taxman 289/15 taxmann.com 307. That was also a case which arose under Section 54F of the Act. The new residential property was acquired in the joint names of the assessee and his wife. The income tax authorities restricted the deduction under Section 54F to 50% on the footing that the deduction was not available on the portion of the investment which stands in the name of the assessee’s wife. This view was disapproved by this Court. It noted that the entire purchase consideration was paid only by the assessee and not a single penny was contributed by the assessee’s wife. It also noted that a purposive construction is to be preferred as against a literal construction, more so when even applying the literal construction, there is nothing in the section to show that the house should be purchased in the name of the assessee only. As a matter of fact, Section 54F in terms does not require that the new residential property shall be purchased in the name of the assessee; it merely says that the assessee should have purchased/constructed “a residential house”.

8. This Court in the decision cited alone also noticed the judgment of the Madras High Court (supra) and agreed with the same, observing that though the Madras case was decided in relation to Section 54 of the Act, that Section was in pari materia with Section 54F. The judgment of the Punjab and Haryana High Court in the case of CIT v. Gurnam Singh [2010] 327 ITR 278/[2008] 170 Taxman 160 in which the same view was taken with reference to Section 54F was also noticed by this Court.

9. It thus appears to us that the predominant judicial view, including that of this Court, is that for the purposes of Section 54F, the new residential house need not be purchased by the assessee in his own name nor is it necessary that it should be purchased exclusively in his name. It is moreover to be noted that the assessee in the present case has not purchased the new house in the name of a stranger or somebody who is unconnected with him. He has purchased it only in the name of his wife. There is also no dispute that the entire investment has come out of the sale proceeds and that there was no contribution from the assessee’s wife.

10. Having regard to the rule of purposive construction and the object which Section 54F seeks to achieve and respectfully agreeing with the judgment of this Court, we answer the substantial question of law framed by us in the affirmative, in favour of the assessee and against the revenue.

The appeal is accordingly dismissed with no order as to costs.