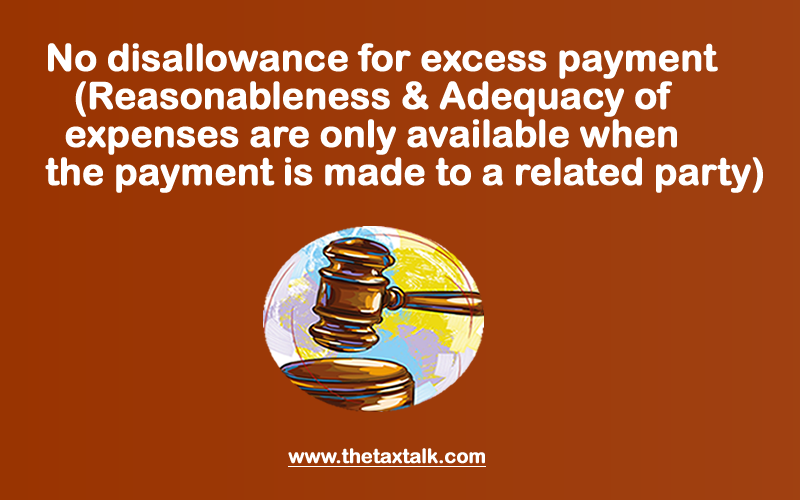 Revenue was not justified in making addition by restricting the amount of commission paid to certain party alleging that the same was unreasonable because the services were actually received by assessee from the said party and it was not related in terms of section 40A(2), so as to disallow the expenditure on the basis of reasonableness.

AO disallowed commission expenditure debited by assessee in its profit and loss account by restricting the same to 5%, instead of 7% as claimed by assessee, holding that commercial exigency of such payment at higher rate as compared to the other parties could not be substantiated by assessee.

Since it was not the first year of the payment of commission to the party and the recipient of the commission income was also not related party in terms of section 40A(2), therefore, revenue was only authorized to see whether the expenditure was laid out or by the assessee for the purposes of the business or not. Power to examine the reasonableness and adequacy of expenses are only available when the payment is made to a related party, which was not the case of the Revenue.

This appeal is filed by the assessee against the order of Commissioner (Appeals)-12, New Delhi, dated 12-2-2011, for assessment year 2010-11 confirming that addition of Rs. 9,31,957 on account of commission paid to M/s. Ashapura Associates @ 7% against the rate of 5% paid to other commission agents, disallowed by the learned assessing officer, under section 37 of the Income Tax Act.

2. The brief facts of the case is that assessee is a partnership firm engaged in the business of manufacturing of auto parts. Assessee filed its return of income at Rs. 2,37,41,360, which was assessed at Rs. 2,69,45,593 vide order under section 143(3) of the Act on 25-3-2013. The issue involved in the appeal is payment of commission of Rs. 9,31,957 paid to M/s. Ashapura Agencies, which was disallowed by the learned assessing officer vide para No. 3 of his order, holding as under :–

“It will be further seen that Commission is given at different rates as mentioned below :–

(i) The rate of 7% is given only to one Agent M/s. Ashapura Associates, Ahmedahad who runs the Ahmedahad Depot for entire state of Gujarat, the biggest sale depot in terms of sale. They are the oldest Agent appointed on 1-4-2006) and who gave the trend of opening Sale depot to the assessee Jinn in other states also. The agreement was for the term of five years. The Copy of Agreement is enclosed herewith.

(ii) The rate of 5% Commission is given to other agents appointed thereafter and they have to borne the depot expenses like Rent, Electricity, Telephone and Staff salaries (refer to clause 5 of Agreement also). The Copies of some of the Agreements are enclosed herewith.

(iii) The Commission rate of 3%, 2% and 1.5% is given to the agents who have not to borne the Depot expenses like Rent, Electricity, Telephone and staff salaries. These expenses are borne by the assessee firm. The copies of some of the Agreements/Appointment letters are enclosed herewith clarifying the said terms.”

“(a) The Agency will be for the terms of Five Years from the date of execution of this agreement determinable nevertheless at the option of the either party by giving to the other two months notice.

(b) If any order received from the agent proves to be a bad debt or results in a loss to the firm, the Jinn shall be entitled to deduct the loss so caused from the commission earned by the agent in respect of that order.”

3.3 Although, the assessee and M/s. Ashapura Associate are not parties covered by the provisions of section 40A(2) of the Income Tax Act, 1961. However, as per the provisions of section 37 for being allowed any expenditure has to be expended wholly and exclusively for the purposes of business. The Hon’ble Supreme Court in various decisions held that taxing authorities have right to consider whether expenditure incurred by the assessee was excessive. The ratio of decisions of the Hon’ble Supreme Court in the following cases is relied upon :–

“In our opinion, the facts of this ease come within the rule laid down by this court in Swadeshi Cotton Mills Co. Ltd. v. CIT. The question whether an amount claimed as an expenditure was laid out or expended wholly and exclusively for the purpose of the business has to be decided on the facts and in the light of the circumstances in each case. The mere existence of an agreement between the assessee and its selling agents or payment of certain amounts as commission, assuming there was such payment, does not bind the Income Tax Officer to hold that the payment was made exclusively and wholly for the purpose of the assessee’s business. Although there might be such an agreement in existence and the payments might have been made, it is still open to the Income Tax Officer to consider the relevant factors and determine for himself whether the commission said to have been paid to the selling agents or any part thereof is properly deductible under section 37 of the Act. “

3. The assessee carried the matter before the learned Commissioner (Appeals) who confirmed the addition as assessee could not substantiate the commercial exigency of such payment @ 7% as the other parties were paid commission @ 5%. In view of this, assessee is in appeal before us.

5. The learned Departmental Representative relied upon the orders of the learned lower authorities.

6. We have carefully considered the rival contentions and also perused the orders of the lower authorities. The assessee has paid commission to one M/s. Ashapura Associates, Ahmedabad, @ 7% of the sales at Ahmedabad Depot. For the payment of the commission the assessee has entered into an agreement on 1-4-2006 with the commission agent, who is also responsible for the recovery of sale proceeds as per clause 7 of the agreement. This is not the first year of the payment of commission to that party. The recipient of the commission income is also not related party under provisions of section 40A(2) of the Act. The learned lower authorities have disallowed the payment without showing any reason except stating that there is no business exigency shown by assessee. It is an established law that in what manner the assessee should carry on his business should be left to the assessee only. The Revenue authorities are only authorized to see whether the expenditure has been laid out or expended by the assessee for the purposes of the business or not. In the present case, the amount of commission for this year have been paid @ 7% and total commission paid is Rs. 32,61,849 out of which the disallowance of Rs. 9,31,957 has been made holding that 2% of the total commission paid is excessive. Such powers are only available when the payment is made to a related party. It is not the case of the Revenue that the party has not rendered services to assessee. In view of this, we reverse the finding of the lower authorities and direct the learned assessing officer to delete the disallowance of Rs. 9,31,957.

7. In the result, appeal filed by the assessee, is allowed.