No addition can be made on presumption & assumption 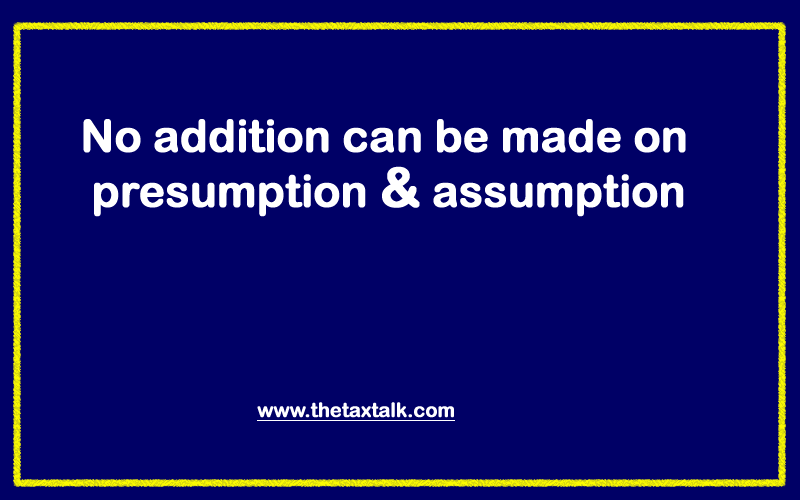 No addition can be made on presumption & assumption

Income from undisclosed sources—Addition under s. 69—Amount found credited in foreign bank account of non-resident—As per the provisions of s. 5(2), only income that accrues/arises in India or is deemed to accrue or arise in India is taxable in India in case of non-residents—AO has accepted the fact that the assessee is a non-resident—In fact, the assessee has filed his passport details right from asst. yrs. 1995-96 to 2011-12 as per which he was in India for less than 60 days in all these years—Assessee also filed an affidavit stating that he does not have any business connection in India either through a proprietary/partnership concern or holding directorship in any Indian company—Assessee further stated that he is neither in employment in India nor in any business activity in India—He is regularly filing his IT returns in India in the status of non-resident disclosing income accruing or arising in India which have been accepted by the Department—Assessee has maintained only one bank account in India which is an NRO account and the same is reflected in AIR information—In order to prove that the amount in foreign bank account is not sourced from India, the assessee has filed the bank statement of his bank account in India from the financial years 1998 to 2008—There are no debits in the said bank account which could have gone to the foreign bank account—Thus, it is clear that no amounts have been transferred from his Bank account in India to any of the foreign bank accounts including that in Geneva—Onus of proving that an amount falls within the taxing ambit is on the Department and it is incorrect to place the onus of proving negative on the assessee—Assessee has filed necessary evidences to prove that he is a non-resident for 25 years and his foreign bank account and assets did not have any connection with India and that the same have been acquired/sourced out of foreign income which has not accrued/arisen in India—It is very clear from the clarifications issued by the Government itself that the legislature does not wish to take any action in respect of non-residents holding foreign bank accounts—Even the Finance Minister has clarified that all accounts in foreign bank may not be illegal as they may belong to NRIs—Even the FAQs to the Black Money (Undisclosed Foreign Income and Assets) and imposition of tax Act, 2015 reiterates the above position in questions Nos. 24 and 32 where it is clarified that if a person, while he was a non-resident acquired or made a foreign asset out of income which is not chargeable to tax in India, such asset shall not be an undisclosed asset under the Act—No material was brought on record to show that the funds were diverted by the assessee from India to source the deposits found in foreign bank account—No addition can be made on presumption and assumption—Therefore, the AO has erred in making addition towards deposits found in the Bank account in Geneva under s. 69—Same rightly deleted by CIT(A)