IS IT OBLIGATORY TO FILE A RETURN OF INCOME BY THE DUE DATE SPECIFIED UNDER Section. 139(1) 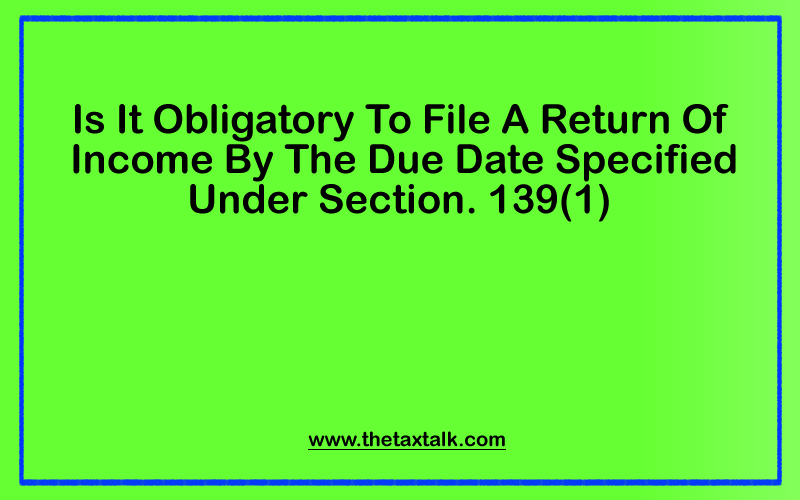 IS IT OBLIGATORY TO FILE A RETURN OF INCOME BY THE DUE DATE SPECIFIEUNDER Section.139(1)

“Every person, if his total income or the total income of any other person in respect of which he is assessable under this Act during the previous year exceeded the maximum amount not chargeable to income-tax shall, on or before the due date, furnish a return of his income or of such other person during the previous year, in the prescribed form and verified in the prescribed manner and setting forth such other particulars as may be prescribed.”

By an Explanation to this section, `due date’ has been defined to mean as under:

(a) In the case of a company—31st December of the assessment year.

(b) In the case of a person other than a company, whose accounts are required to be audited under Income-tax Act or under any other law or in case of a co-operative society or in a case where report of an accountant is required under section 80HHC or section 80HHD—31st October of the assessment year.

(c) In a case where total income includes income from business or profession—31st August of the assessment year.

(d) In any other case—30th June of the assessment year.

For example: if the Rohan’s total income is, say Rs. 2,00,000 for assessment year 2017-18. Besides this, his income from bank interest is 6,000, and agricultural income is Rs. 10,000. Then the assessee is not obliged to file the return of his income because his total income for which he is assessable under the Act is only Rs. 2,00,000 (since Rs. 6,000 is exempt under section 80TTA and Rs. 10,000 is exempt under section10(1) of  agricultural income), which does not exceed of the maximum amount not chargeable to tax. Thus, an obligation to file a return of income under section 139(1) arises only when the income exceeds the specified limit.

Then there is another statutory provision under section 139(4), according to which an assessee has been given a statutory right to file a return within one year from the end of relevant assessment year or before completion of assessment, whichever is earlier. Here it is also pertinent to note that according to section 184, a certified copy of deed is to be filed alongwith the return of the year for which assessment as a firm is first sought. It does not specify any section, which means that it may be filed alongwith the return filed under section 139(1) or 142(1) or 139(4) or 148.

introduced section 234A. According to this section, if a person fails to file a return within the time allowed under section 139(1), he shall pay simple interest at 1% per month for the period of delay.

For Example: Priya has a total tax outstanding of Rs. 3,00,000 (Including net advance tax and TDS) Instead of filing her returns on July 31, she files it on January 15. She is now late by 6 months on the tax payment. Here’s how much she’s liable to pay: