HC directed revenue to penalise employers who failed to issue Form No.16 within prescribed time 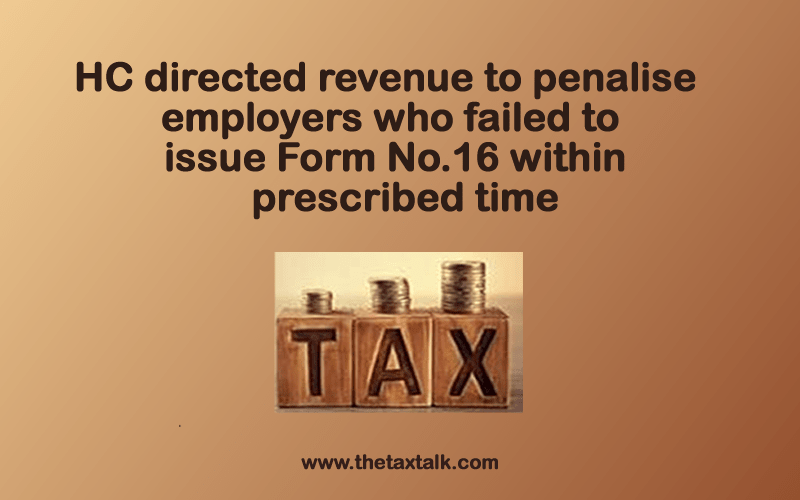 HC directed revenue to penalise employers who failed to issue Form No.16 within prescribed time

a) Assessee filed the instant appeal before the Bombay High Court raising serious concerns for those salaried employees who were employed by Companies and Corporations, whose Promoters and persons in-charges did not bother to issue Form No. 16 in time.

b) It was contended before the Court that the employees were suffering serious consequences, breaching and violating legal provisions due to non-issuance of Form No. 16 in time. Some of those employees were senior citizens.

The High Court held as under:

1) The petitioner was a senior citizen of 65 years of age; because he was not in possession of Form No.16, he had suffered at the hands of the Department.

2) The Court didn’t see any record till date when the Department of Revenue launched prosecution against such employers who failed to issue Form no. 16 to employers in time.

3) No information was ever displayed in relation to such defaulters by the Department. Therefore, the necessary steps were to be taken so that such occurrences were avoided in future.

4) The Department had to provide information of such defaulters so that those seeking employment or awaiting either retiral benefits or such other sums from the employers would know in advance as to how they were expected to comply with law.

5) We expect the Department of Income-tax to penalise such defaulters and take other strict measures contemplated by law against them. – [2018] 99 taxmann.com 196 (Bombay)