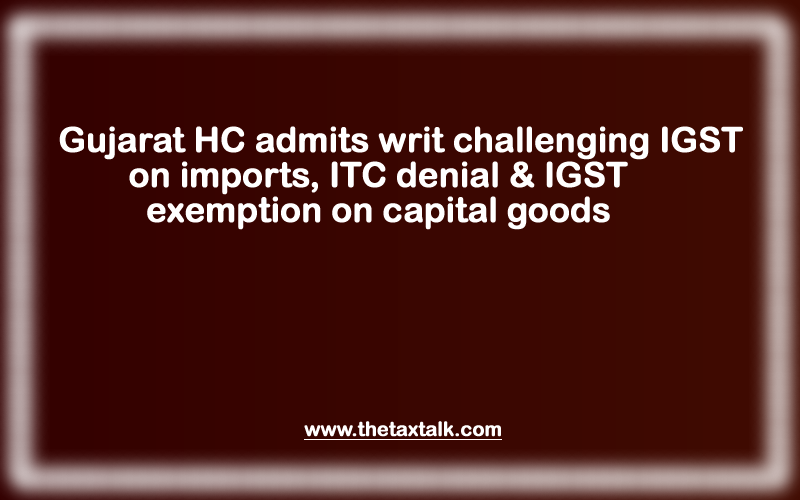 Trushna Exim vs. Union of India

Writ petition has been filed in Gujarat HC on the following questions of law:

Whether the levy of Integrated Tax on import of goods is constitutionally valid?

The levy of IGST sought to be made under Section 3(7) of Customs Tariff Act, 1975 is unconstitutional since though the proviso to Section 5(1) IGST Act states that integrated tax on goods imported into India shall be levied and collected in accordance with Section 3 of Customs Tariff Act, 1975, however, the term integrated tax is not defined under Customs Act, 1962 nor under Customs Tariff Act, 1975. Therefore, it is submitted that in the absence of charging section specifically referring to a charge of duty of customs, the charge for levying IGST would fail. It is submitted that where the charge fails, the collection of tax would be without authority of law transgressing the provisions of Article 265 of the Constitution.

Further, the entire purpose of having a mechanism under Article 246A read with Section 5 and section 7 of IGST Act 2017 has been defeated by virtue of proviso to Section 5(1) of IGST Act, 2017 as the charge of integrated tax has been abdicated. It is submitted that as the charge of integrated tax on goods imported into India has been abdicated, no further tax can be collected by resorting to Article 246 read with entry 83 of List I as the said entry only authorises collection of duties of customs including export duties and it does not authorise the collection of integrated tax.

Similarly, Section 16(1) specifically provides that every registered person is entitled to take credit of input tax charged on supply of goods or services or both which are used or intended to be used in the course or furtherance of his business and there is no exclusion of ITC on ‘capital goods’. Therefore, the restriction contained in sub-rule (4) ofRule 89 of CGST Rules, 2017 wherein the term ‘Net ITC’ has been restrictively defined to cover the input tax credit availed on ‘input’ and ‘input service’ is contrary to statutory provisions. Accordingly, the provisions of Rule 89(4) of CGST Rules, 2017 restricting the refund claim only on the input tax credit availed on inputs and input services is ultra vires the provisions of Section 54 read with Section 16 of CGST Act, 2017 and therefore should be struck down entirely.