CBDT has issued Standard Operating Procedure (SOP) which need to be followed for ITR Processing or assessment in suspected Fraud case. 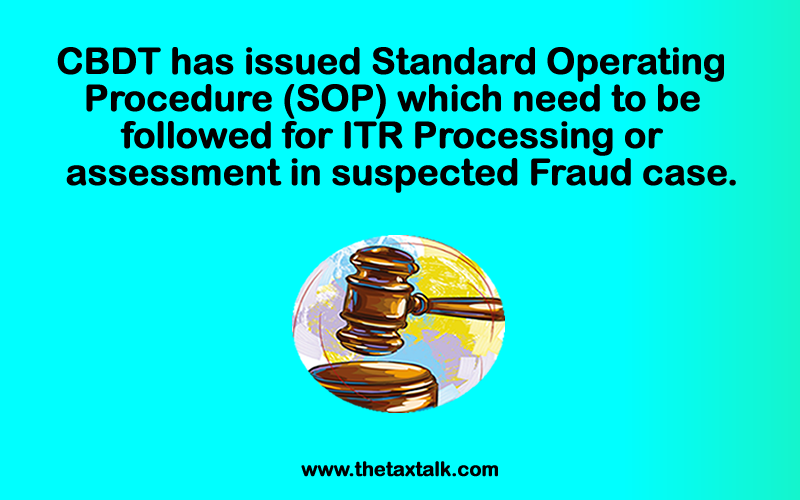 CBDT has issued Standard Operating Procedure (SOP) which need to be followed for ITR Processing or assessment in suspected Fraud case.

This is in reference to the subject mentioned above.

2. The suspected fraud cases are being reported to CPC-ITR, Bengaluru by CPC-TDS and various field formations. Such suspected cases are broadly classified in two categories i. e (i) Suspected Fraud PANs (ii) PANs linked with the suspected fraud TANs. The first category broadly consists of cases where a PAN (Taxpayer) has been identified as having submitted a false claim of deduction or exemption with collusion of some intermediary or otherwise or having submitted revised return by identity theft or impersonation for the primary purpose of claiming refund or fraudulently obtained PAN for the purpose of committing refund fraud, whereas the second category consist of the PANs linked with a TAN where suspected TDS fraud is committed with false claim of TDS deduction with the purpose of claiming refund.

3. It may be noted that in many cases the reporting of the fraudulent cases is based on preliminary findings or survey action. Therefore, the processing of the ITR is put on hold but not invalidated or treated as non-est.

4. Whenever any such case is reported, CPC-ITR sends an e-mail to designation based e mail id of Assessing Officer concerned with request to verify the facts and submit a report to CPC-ITR. If assessing officer’s report indicate that there is no fraud in the case, the CPC-ITR remove the case from list and allow processing and other proceedings on the PAN as per normal business rules. If report of AO confirms the fraud or no report is received from AO within 30 days, the CPC-ITR processes the case as per following-

(i) Suspected Fraud PAN- The credit of TDS and taxes is notallowed in processing.(ii) PANs Linked withsuspected Fraud TAN- The credit of TDS linked with suspected TAN is not allowedin processing.
5. Instances have been reported by field formations that CPC-ITR is notallowing computation in such cases selected under scrutiny. Manual order uploadin ITBA is also not being allowed in such cases. In many cases the AssessingOfficer is unaware that the PAN or TAN quoted by Taxpayer is categorized as fraudulent.

6. To deal with such type of cases and to safeguard interest of revenue, the following SOP is being prescribed.

The assessing officer will be provided a list of such suspected cases through ITBA- Assessment Module-MIS.

i. The AO will verify the facts and submit a report to CIT(CPC-ITR), Bengaluru through Pr CIT concerned indicating recommendation (i) No fraud relating to TDS or other taxes committed in the case so to remove the case from the list of suspected fraud cases (ii)Any other fact necessitating keeping the case in suspected fraud list. The report may be submitted in the attached proforma, Annx-1

ii. On receiving favorable report, CPC-ITR will remove the case from such list and allow credit of TDS/Pre-paid taxes as the case may be. Therefore, the onus will be on the AO to ensure full satisfaction about the genuine-n  e ss of the taxpayer or his claims in ITR or of TDS/Tax payments

iii. Such report along with Approval of Pr CIT concerned may besent to CPC-ITR through e-mail at aohelpdeskcpc@incometax.gov.in

iv. On receiving adverse report or no report, CPC-ITR will process/compute such case as per existing process described in para 4. The AO are also advised to disallow such fraudulent claims of taxes while submitting computation in such cases.

v. SPECIAL NOTE- In any such case is being manually uploaded in ITBA- If adverse report is submitted to CPC-ITR or no report is submitted for the PAN, , the assessing officer should disallow the credit of TDS on PAN linked to suspected TAN or credit of entire prepaid taxes made on suspected PAN failing which the case will not be allowed to be uploaded on ITBA.

7. The complete procedure is elaborated in the user manual for the functionality which is available on ITBA for the convenience of the users. This may be circulated amongst all officers working in your charge. With this, the various representations received from field formations in this regard stand disposed off. Since many such cases are reported to be Time-barring (Dec31st), AOs may take necessary action as per this Instruction at the earliest to avoid any last minute problem.

8. In case of any technical difficulty being observed, users may immediately contact OR write to following-

9. It is further emphasized that all such cases should be examined on priority and reference as per prescribed procedure be sent to CPC-ITR as soon as possible. It is expected that all Officers may henceforth use the aforesaid process, wherever required, while facing such issue.

10. This is issued with the prior approval of Pr. DGIT(Systems).