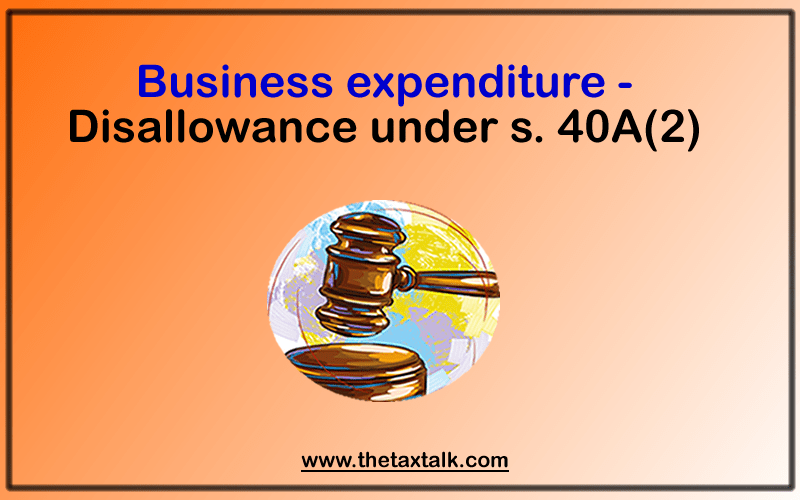 be made in the year under consideration—

AO having no made any disallowance under s. 40A(2) in the year of interest-free

advance to other company, no disallowance could be made on that ground in the

M.L. Joshi, for the Appellant : S.S. Thind, for the Respondent

The assessee has come in appeal against the order of CIT(A)(c), Ludhiana, dt. 24th July,

disallowance of Rs. 2 lacs out of interest paid during the year.

disallowance of proportionate premium payable on redemption of debenture as revenue

out of telephone expenses.

assessee’s contention that no adjustrnent in the relief claimed under s. 80-I could be

made in view of the order of Hon’ble Tribunal in appellant’s own case for asst. yr. 1990-

out of interest paid during the year, the AO noted that there is a debit balance of Rs. 5

lacs each in the accounts of M/s Manipur Vanaspati and Allied Inds., and M/s Oswal

Wools Ltd., on which no interest has been charged while the assessee has paid interest

of Rs. 296.25 lacs on the loans raised by it. The assessee went in appeal before the

given. These loans were advanced not during the year but in the year ending 31st

March, 1990. The funds were advanced for the purpose of business. No nexus was

established between the money borrowed and the money given by the assessee.

Therefore, no disallowance should be made on the basis that the funds have been put to

use for non-business purposes. The CIT(A) confirmed the order of the AO. Being

aggrieved, the assessee has come in appeal before us.

2.1 We have heard the rival submissions and perused the material on record. We find

decision of Karnataka High Court in the case of CIT vs. Sridev Enterprises (1991) 97 CTR

addition has been made in the earlier years, the opening balance could not be

considered in the year in question for the purpose of computation of disallowance. The

year when the money was advanced by the assessee, the AO did not make any

by the assessee to these parties was for non-business purposes. In the absence of

findings by the AO for the assessment year in which the money was advanced, we feel

premium payable on redemption of debentures. Learned Aurthorized Representative was

decision of Hon’ble Supreme Court in the case of Madras Industrial Investment Corpn.

3.1 We, therefore, after perusing the facts of the case, are of the view that this ground

ground of appeal filed by the assessee.

expenses. After carefully considering the rival submissions, we find that this ground is

provided at the residence of the Director, wholly and exclusively for the business

purposes of the assessee, no disallowance can be made in the hands of the company.

Accordingly, following the said judgment, we allow this ground of appeal of the assessee

from Rs. 6,88,017. After hearing the rival submissions and perusing the material on

record, we find that the assessee has claimed a relief to the extent of Rs. 688017. The

first purchased greezy wool, manufactured wool tops and transferred these to the

administrative and other expenses, reduced the deduction of Rs. 6,88,017 to nil. Both

year, the AO had adjusted the profit due to less charge of the transfer price from the

transfer price as well as sale price is only Rs. 60,172 while in this year, profit has been

the closing stock, beyond difference in transfer price. In respect difference due to

transfer price. We have already in ITA No. 1057/Chandi/96, restored this issue to the file

price is to the extent of .026 per cent the same should be ignored and if it is in excess of

Accordingly we direct in respect of adjustment on account of difference in transfer price.

Respectfully following the order for the asst. yr. 1992-93 by restoring this issue to the

file of the AO to reduce the relief if the market price is in excess of .026 per cent of the

transfer price, otherwise the relief need not be reduced but the adjustment on account of

being advanced before us. We, therefore, restore these grounds of appeal to the file of

the AO directing him to recompute the deduction under s. 80-I on the basis of our

7,56,348. Both the parties to the dispute agreed that this issue is duly covered in favour

of the assessee by the decision of this Tribunal in the case of Malwa Cotton Spg. Mills

total turn over. Following the judgment of Bombay High Court in the case of CIT vs.

(Bom) and after giving our careful consideration, and following the aforesaid judgment of

this Tribunal, restore the issue to the file of the AO directing him that the CST and ST

under s. 80HHC. Accordingly, the AO is directed to recompute the deduction under s.

80HHC. Thus, the assessee succeeds on this ground.