An assessee cannot be treated as a co-operative society meant only for its members and providing credit facilities to its members if it has carved out a category called ‘nominal members’. 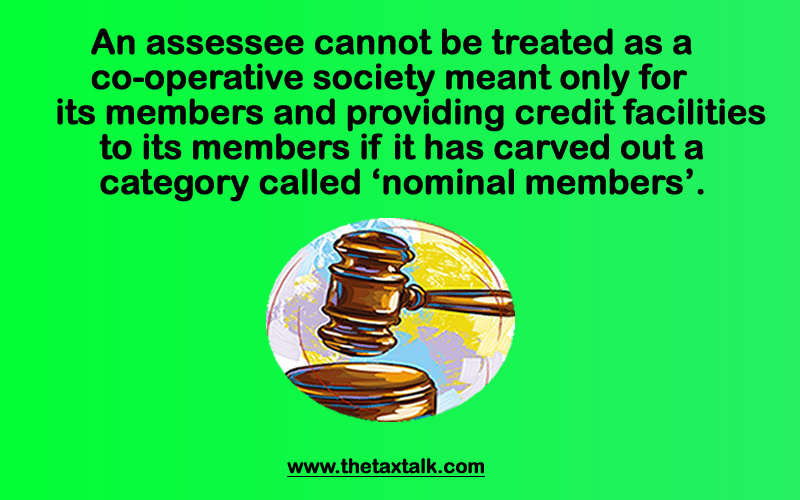 An assessee cannot be treated as a co-operative society meant only for its members and providing credit facilities to its members if it has carved out a category called ‘nominal members’.

The key observation bythe Apex court started from Para 18 is reproduced for ease of reference of thereaders:

6. The classes of societies covered by Section80-P of the Act are as follows: (a) Engaged in business of banking andproviding credit facilities to its members; xx xx xx

(iii) In the case of Commissioner of IncomeTax v. Punjab State Co-operative Bank Ltd. (2008) 300 ITR 24 (Punjab &Haryana H.C.), while dealing with an identical issue, the High Court of Punjaband Haryana held as follows:

8. The provisions of section 80P wereintroduced with a view 5 (1998) 5 SCC 48 6 (2008) 300 ITR 24 (Punjab &Haryana H.C.) 18 to encouraging and promoting the growth of the co-operativesector in the economic life of the country and in pursuance of the declaredpolicy of the Government. The different heads of exemption enumerated in thesection are separate and distinct heads of exemption and are to be treated assuch. Whenever a question arises as to whether any particular category of anincome of a co-operative society is exempt from tax, then it has to be seenwhether such income fell within any of the several heads of exemption. If itfell within any one head of exemption,…. It means that a co-operative societyengaged in carrying on the business of banking and a co-operative society providingcredit facilities to its members will be entitled for exemption under thissub-clause. The carrying on the business of banking by a cooperative society orproviding credit facilities to its members are two different types ofactivities which are covered under this sub-clause. xx xx xx

13. So, in our view, if the income of asociety is falling within any one head of exemption, it has to be exempted fromtax notwithstanding that the condition of other heads of exemption are notsatisfied. A reading of the provisions of section 80P of the Act would indicatethe manner in which the exemption under the said provisions is sought to beextended. Whenever the Legislature wanted to restrict the exemption to aprimary co-operative society, it was so made clear as is evident from clause(f) with reference to a milk co-operative society that a primary societyengaged in supplying milk is entitled to such exemption while denying the sameto a federal milk co-operative society.”

(iv) The aforesaid judgment of the High Courtcorrectly analyses the provisions of Section 80P of the Act and it is in tunewith the judgment of this Court in Kerala State Cooperative MarketingFederation Limited (supra).

(v) With the insertion of sub-section (4) bythe Finance Act, 2006, which is in the nature of a proviso to the aforesaidprovision, it is made clear that such a deduction shall not be admissible to aco-operative bank. However, if it is a primary agriculture credit society or aprimary co-operative agriculture and rural development bank, the deductionwould still be provided. Thus, co-operative banks are now specifically excludedfrom the ambit of Section 80P of the Act.

(vii) So far so good. However, it issignificant to point out that the main reason for disentitling the appellantfrom getting the deduction provided under Section 80P of the Act is notsub-section (4) thereof. What has been noticed by the Assessing Officer, afterdiscussing in detail the activities of the appellant, is that the activities ofthe appellant are in violations of the provisions of the MACSA under which itis formed. It is pointed out by the Assessing Officer that the assessee iscatering to two distinct categories of people. The first category is that ofresident members or ordinary members. There may not be any difficulty as far asthis category is concerned. However, the assessee had carved out anothercategory of ‘nominal members’. These are those members who are making depositswith the assessee for the purpose of obtaining loans, etc. and, in fact, theyare not members in real sense. Most of the business of the appellant was withthis second category of persons who have been giving deposits which are kept inFixed Deposits with a motive to earn maximum returns. A portion of thesedeposits is utilised to advance gold loans, etc. to the members of the firstcategory. It is found, as a matter of fact, that the depositors and borrowersare quiet distinct. In reality, such activity of the appellant is that offinance business and cannot be termed as co-operative society. It is also foundthat the appellant is engaged in the activity of granting loans to generalpublic as well. All this is done without any approval from the Registrar of theSocieties. With indulgence in such kind of activity by the appellant, it isremarked by the Assessing Officer that the activity of the appellant is inviolation of the Co-operative Societies Act. Moreover, it is a co-operativecredit society which is not entitled to deduction under Section 80P(2)(a)(i) ofthe Act.

(viii) It is in this background, a specificfinding is also rendered that the principle of mutuality is missing in theinstant case. Though there is a detailed discussion in this behalf in the orderof the Assessing Officer, our purpose would be served by taking note of thefollowing portion of the discussion:

As various courtshave observed that the following three conditions must exist before an activitycould be brought under the concept of mutuality; that no person can earn fromhim; that there a profit motivation; and that there is no sharing of profit. Itis noticed that the fund invested with bank which are not member of associationwelfare fund, and the interest has been earned on such investment for example,ING Mutual Fund [as said by the MD vide his statement dated 20.12.2010].[Though the bank formed the third party vis-a-vis the assessee entitled betweencontributor and recipient is lost in such case. The other ingredients ofmutuality are also found to be missing as discussed in further paragraphs]. Inthe present case both the parties to the transaction are the contributorstowards surplus, however, there are no participators in the surpluses. There isno common consent of whatsoever for participators as their identity is notestablished. Hence, the assessee fails to satisfy the test of mutuality at thetime of making the payments the number in referred as members may not be themember of the society as such the AOP body by the society is not covered byconcept of mutuality at all.”

(ix) These are the findings of fact which haveremained unshaken till the stage of the High Court. Once we keep the aforesaidaspects in mind, the conclusion is obvious, namely, the appellant cannot betreated as a co-operative society meant only for its members and providingcredit facilities to its members. We are afraid such a society cannot claim thebenefit of Section 80P of the Act