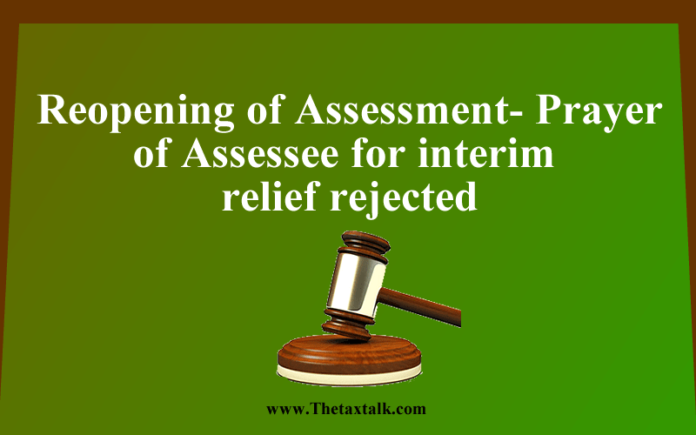 RESERVED FOR ORDER ON: 14th DECEMBER, 2018 PRONOUNCED THE ORDER ON: 20th DECEMBER, 2018 PER COURT :- (Per : K.K. Sonawane, J.) Heard learned counsels appearing for the parties on the interim relief. Perused the petition and other relevant documents produced on record.

2. At this juncture, the petitioner is insisting for interim relief in the nature of injunction, restraining respondent – Income Tax Department from proceeding further to reopen the Assessment, for A.Y. 2011-2012, pursuant to notice purportedly issued under section 148 of the Income Tax Act, 1961 (for short “Act of 1961”).

4. Learned counsel appearing for the petitioner submits that entire details of the income with relevant documents were produced before the concerned authority long back during the course of scrutiny in the year 2013. Even thereafter, the petitioner furnished required details in reply to the summons under Section 131 of the Act of 1961. The learned counsel alleged that respondent committed error for initiating the action to bring objectionable amount in tax net. The respondent did not apply its mind in proper manner nor conducted any independent inquiry. The learned counsel harped on the circumstances that in view of proviso to Section 148 of the Act of 1961, respondent is not empowered to re- open the assessment beyond the period of four years of the end of the relevant Assessment Year 2011-12. There should be tangible material on record to arrive at the conclusion that income shown by the petitioner was found escaping assessment. According to learned Counsel, the petitioner has furnished entire details pertains to loan procured during the relevant assessment year. It cannot be said that there was income, which is to be appreciated as escaped assessment within the meaning of Section 147 of the Act of 1961. It has been alleged that the amount of loan itself cannot be considered as income of the petitioner to bring it within tax net. Learned counsel for the petitioner explained the circumstances on record in detail and insisted for interim relief in the nature of 4 WP-12990-18 injunction i.e. to protect interest of the petitioner pending the Writ Petition restraining respondent from further process of re-opening the assessment of the income of the petitioner for Assessment Year 2011-12. He has also relied upon the ratio laid down by this Hon’ble Court in the various judicial precedents in regard to contentious issue of notice under Section 148 of the Act of 1961.

5. Learned counsel for the respondent filed affidavit-in-reply on record and vociferously opposed the contentions put-forth on behalf of petitioner. Learned counsel for respondent submitted that after completion of procedural formalities for assessment proceeding, the DDIT (Inv) – II Surat has carried out independent inquiry in regard to suspicious transactions reflected from the documents of IT Returns of the petitioner. It was revealed that the petitioner indulged in the business of Petrol Pump. He has maintained the books of account, however, there was no books of account maintained by the petitioner in regard to his personal financial transactions other than Petrol Pump. Moreover, there were no findings in regard to sources of loan transactions with Megh Mayur Reality Pvt. Ltd. It has been alleged that if there is failure to disclose the material facts during the course of Assessment proceeding then it confers jurisdiction on the Assessing Officer to re- open the assessment. The petitioner failed to disclose about the loan transactions of Rs.39,72,12,700/- (Rs. Thirty Nine Crores Seventy Two Lakhs Twelve Thousands Seven Hundreds Only) from Megh Mayur Reality Pvt. Ltd. and refund of another loan amounts of 5 WP-12990-18 Rs.6,00,00,000/- (Rs. Six Crores Only) to Reliance Progressive Pvt Ltd. as well as Rs. 5,00,00,000/- (Rs. Five Crores Only) credited in the Bank account of Megh Mayur Park Co-operative Housing Society. According to learned counsel, there was tangible material on record to arrive at the conclusion that income shown by the petitioner for A.Y. 2011-12 is escaping assessment. The reassessment proceedings initiated does not amount to change of any opinion or review of original assessment proceeding, and therefore, re-opening of the assessment is valid, legal and within the provisions of law. Learned counsel for the respondent drawn our attention to proviso of Section 148 of the Act of 1961 and urged that the petitioner is not at all entitled for any sort of interim relief pending the petition.

6. We have given anxious consideration to the arguments advanced on behalf of both sides. Admittedly, respondent has issued notice under Section 148 of the Act of 1961 for reopening of assessment of income afresh for the A.Y. 2011-12. Learned counsel for petitioner, at the threshold raised the objection that reopening of assessment cannot be taken place beyond the period of four years of the end of relevant Assessment Year 2011-12. In view of factual score, as referred above, we are not persuaded ourselves to accede to the arguments advanced on behalf of learned counsel for the petitioner. The proviso to Section 148 of Act of 1961 contemplates that in case of failure on the part of Assessee to disclose full and true facts essential for assessment, the concerned authority is empower to re-open the assessment of income of the 6 WP-12990-18 Assessee.

7. In the matter in hand, it is not denied that there were bank entries of the concerned huge amounts of Rs.39,72,12,700/- from Megh Mayur Reality Pvt. Ltd. as well as refund of loan of Rs.6,00,00,000/- to Reliance Progressive Pvt Ltd. and Rs.5,00,00,000/- credited in the Bank account of Megh Mayur Park Co-operative Housings Society respectively. It is also not put into controversy that the petitioner did not produce personal books of account maintained for financial transactions other than his business of Petrol Pump. According to the petitioner, the amount shown escaping from the Assessment, all were the loan amounts and cannot be taken into consideration as income to bring it in tax net. In contrast, the respondent cast allegation that there were bank account statements showing all these financial transactions, but, no any books of account were produced on behalf of petitioner to buttress the theory of petitioner that these financial transactions were not towards income of the petitioner, but, all these are the loan transactions and it cannot be considered for income tax purpose.

8. Prima facie, we find substance in the contentions propounded on behalf of respondent- IT-Department. Be that as it may, the entire factual aspect as alleged on behalf of both side appears to be dealt with after detail hearing. According to the petitioner, he availed the loan facility from concerned parties during the relevant 7 WP-12990-18 period and there are entries shown in the statement of Bank account in regard to financial transactions. But, petitioner shown inability to produce its books of account to show the source of these amounts were being an loan amount. Therefore, respondent claimed all these disputed bank entries as income of the petitioner to bring all it within tax net. The superficial scrutiny of all the relevant circumstances, prima facie, indicate that there was failure on the part of petitioners to disclose all the true and full factual aspect of income for scrutiny during the relevant A.Y. 2011-12. In such circumstances, it is cumbersome to appreciate at this stage the embargo of four years as contemplated under the proviso of Section 148 of the Act of 1961 in this case. In the above premises, we are not inclined to grant any sort of interim relief. Therefore, the prayer for interim relief being unsustainable one, deserves to be rejected. Accordingly, the same stands rejected.