which was disallowed under section 40A(3) by the assessing officer read with rule 6DD got reversed on higher appeal. 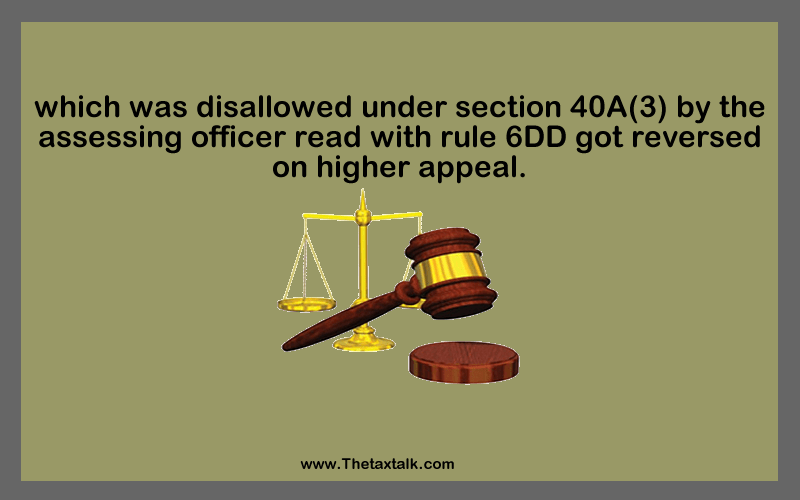 which was disallowed under section 40A(3) by the assessing officer read with rule 6DD got reversed on higher appeal.

Assessee, a coal trader, had to pay freight and toll payment  in cash for INR 1907.96 lakhs, which was disallowed under section 40A(3) by the assessing officer read with rule 6DD got reversed on higher appeal. Aggrieved, department went in further appeal.

ITAT mentioning that the CIT (A) was in error to drop the disallowance on the plea of genuineness of payment that the case required remanding to AO for review of facts. It was the plea of the assessee that 17% of the spend of the total pay-out was toll thus fell under the exemption of rule 6DD akin of payment to Govt., etc., the balance being freight without exceeding the threshold as per section 40A(3). There was no dispute on the genuineness of the payments made. The ITAT did question the logic of the assessee with so many variations possible in a carriage how can there be bucketing of spend as a percentage without finding on facts what was the toll, what was the cash component paid, what was the threshold breached etc.,etc.

Couple of fine points discussed in the ruling which make it a noteworthy decision, these being –

The intent while introducing section 40A(3) might have been to curb non-genuine expenses getting paid in cash but with the passage of time and restrictions imposed and amendments made one may have to read it as a provision to curb expenditure in cash. Genuineness or non-genuineness has no reasoning then as what is not genuine should not be first allowed in the law and there need not be a topping provision like section 40A(3) for the same.

As to whether it runs contrary to article 19(1)(g) if for a constitutional bench especially with the amendments on it. Be that it as may the constitutionality having already decided in the Attar Singh Gurumukh Singh case, may need to be read more like a taxing statute strict in its interpretation.

“It was thus open for the assessee to justify the circumstances under which the payment was not practicable, or would have caused a genuine difficulty to the payee, even as noted by the Hon’ble Apex Court in Attar Singh Gurumukh Singh (1991) 191 ITR 677(SC), to which, as also to the Board Circular No.220, dated 31-.05-1977, reference was made by the Hon’ble jurisdictional High Court in Gurdas Garg v. CIT(A) (in ITA No. 413 of 2014, dated 16-07-2015), holding that where therefore the genuineness of the payment is not in doubt and a case of business expediency made out, section 40A(3) cannot be invoked.

We are afraid, we do not find any basis in the clear and ambiguous language of the provision, reproduced supra, for the said construction. On the contrary, section 40A(3) gets attracted – under the circumstances specified therein, only where the genuineness of the expenditure is not in doubt, and the same (expenditure) is therefore otherwise allowable, A non-genuine expenditure would get ousted (for admissibility) at the threshold. This is as it would stand to be disallowed under the relevant section granting deduction itself , as section 37(1) in the instant case, so that there is no occasion to travel to the non obstante provision of section 40A(3), which seeks to impose an additional condition as to the mode of payment where it exceeds a specified sum (On a single day) for its allowability  In the sense, it is a fiscal measure intended to discourage payments in case or, alternatively , encourage transmission of funds having income implication –one man’s expenditure being the other man’s income through the banking channel. How could then, one may ask, its terms, which are plain, be construed to mean that it bars only non-genuine expenditure, so as to hold that it shall not apply where the genuineness (of the expenditure) is not in doubt. The section, clearly, has noting direct to do with the genuineness of the expenditure, but is only a fiscal measure regulating the mode of payment (of a genuine expenditure), with the view to facilitate the identification of the money trail and verification of the reporting of income in its respect. A non-genuine payment/expenditure, as afore-noted, stands ousted at the threshold, i.e., even otherwise, and without recourse to section 40A(3).

It may be noted that it is the complexity as well as the cumbersome nature of the verification, where even the identity of the payee/s tends to get blurred, while a transfer from a bank account to another automatically confirms the identity of the payer and the payee, that has understandably forced the Parliament to provide this legislative measure.

A profile of the amendments to the provision, co-opted on the statute by Finance Act 1968 (w.e.f. 01-04-1968), over time, read along with rule 6DD, as it is to be (refer: Attar Singh Gurmukh Singh (Supra)), shows a gradual phasing out of the avenues where a breach of the monetary limit imposed (for cash payments, or per other than the prescribed mode/s) was allowed, i.e., the excepting circumstance, in view of the business exigencies; the peculiar practice/s in a particular trade/sector of economy – as agriculture, animal husbandry, etc.; the increasing spread of and accessibility to banking in the economy, et. al. The provision, which initially permitted payments through a negotiable instrument, was in time limited to account payee instrument only, presumable to enable tracking. Responding to a practices of splitting a payment into several (on the same day), each below the prescribed limit, the restriction was amended with reference to the aggregate of payments made during a day. Expenditure could thus be paid in cash (or other proscribed modes) over several days, i.e., without attracting the provision. Why, the limit of Rs 35,000 (per day) for freight payment is itself a departure from the norm of  Rs 20,000 (scaled down to Rs 10,000 per day from assessment year 2018-19 onwards), considering the requirement of the trade. Further, all this, again, dispels any doubt, if any, of the provision being applicable only to non-genuine expenditure / payments a consideration/ factor sought to be introduced. Reference in this regard may be made to the decision by the Special Bench of the Tribunal in ITO v. Kenaram Saha & Subash Saha 2009 TaxPub(DT) 381 (Kol-Trib) : (2008) 116 ITD 1 (Kol)(SB).

Section 40A(3) is, no doubt, open to challenge in view of the provision getting more restrictive. Whether it constitutes more than a reasonable restraint on trade-permissible under Article 19(1)(g) of the Constitution, if for a constitutional court to examine and declare in appropriate proceedings before it.

Genuineness of expenditure or genuineness of payment thereof are, as afore-stated, prerequisites for deduction of an expenditure in computing income , which falls to be considered even. De hors and independent of section 40A(3), which only seeks to regulate its mode of payment. Why, would a non-genuine expenditure stand to be allowed where paid in cash in installments which do not breach the prescribed limit or paid per account payee cheque (drawn on a bank) or a bank draft? Recent demonetization of November, 2016 has brought forth the fact of currency in circulation in Indian economy, as a ratio of GDP, as one of the highest in the world. The latest scaling down of the limit under section 40A(3), referred to earlier, could possibly have been guided by those and such like considerations, besides of course promoting payment through the banking sector/electronically. The recent move by the Government of India to link Adhaar(Identity) with bank accounts is one more attempt to link payment through banking channel with identity. Here it is pertinent to note that the provision during its long history has witnessed a disallowance in fraction (20%) to-for most part, a total disallowance, i.e. where the provision get attracted.

We, accordingly, find little merit in the disregard of the clear and unambiguous provision of law by the learned CIT (A). Section 40A(3), in view of the breach of the monetary limit specified therein, read with rule 6DD, providing for the excepting cases and circumstances, none found applicable, shall, therefore apply.”