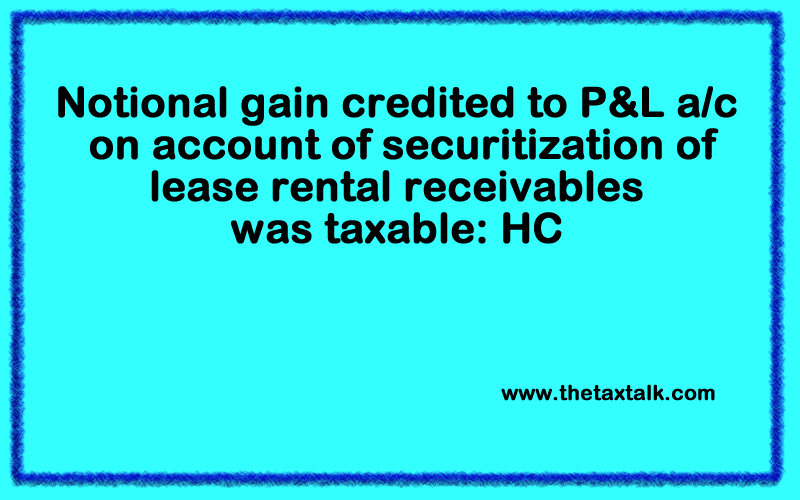 Notional gain credited to P&L a/c on account of securitization of lease rental receivables was taxable: HC
Where during year assessee had itself credited to profit and loss account an amount on account of securitization of lease rentals receivable in subsequent years, same was to be taxed during year under consideration
[2018] 98 taxmann.com 91 (Bombay)  L & T Finance Ltd. v. Deputy Commissioner of Income-tax, Circle 2(2), Mum. S.C. DHARMADHIKARI AND B.P. COLABAWALLA, JJ. IT APPEAL NOS. 256 & 267 OF 2016† SEPTEMBER  17, 2018
Section 28(i) of the Income-tax Act, 1961 – Business income – Year in which chargeable (Securitization of lease premium) – Assessment years 2002-03 and 2003-04 – Assessee NBFC was engaged in business of leasing, hire purchase and other financial activities – During year, assessee securitized certain amount as rent receivables from April 2002 to March 2004 and adjusted a part of said amount against rent receivable in its books of account and balance amount was recognized as a profit on securitization of lease receivables in its profit & loss account – Assessee contended that this amount represented a notional gain and not real income, thus, no income tax could be levied on same – However, Assessing Officer treated such amount as an income of assessee on ground that assessee itself had credited this amount to its profit and loss account – Commissioner (Appeals) as well as Tribunal also upheld finding of Assessing Officer on same grounds – Whether since finding given by Assessing Officer were purely based on factual aspects of matter, no substantial question of law arose in instant appeal – Held, yes [Paras 9 to 12] [In favour of revenue]