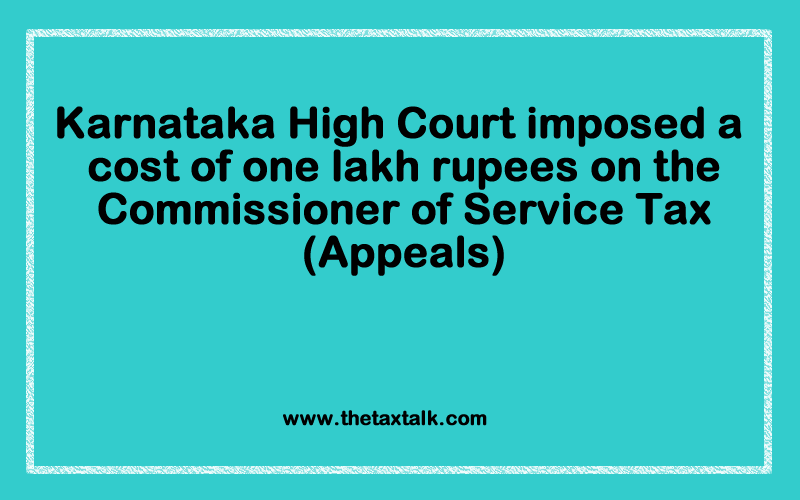 The Karnataka High Court, last week imposed a cost of one lakh rupees on the Commissioner of Service Tax (Appeals) for the breach of judicial discipline.

In the instant case, the petitioner-assessee claimed the refund of tax on account of the export of services rendered by it.
The issue had already disposed of by the Customs, Excise and Service Tax Appellate Tribunal (CESTAT) in favour of the assessee. When a similar issue in respect of the subsequent year came before the first appellate authority, the authority refused to follow the earlier precedent.
The order reads as “I have discussed the issue in detail in OIA Nos 165 to 177/2016 and do not find any reason to change my mind or findings thereof and therefore see no reason or justification to set aside the order-in-original.” Before the High Court, it was submitted that no further appeal against the Tribunal order was filed before the Higher Courts and the issue has become final.
Justice Vineet Kothari noted that “the first appellate authority throwing to the winds, the principles of judicial decisions and binding order passed by the higher appellate forum, not only reiterated his own stand which was set aside by the Tribunal but the same is sought to be defended by the department with the aforesaid words quoted above.
The total callous, negligent and disrespectful behaviour shown by the departmental authorities in this Court should not be tolerated at all. It is this lack of judicial discipline which if it goes unpunished, will lead to more litigations and chaos and such public servants are actually a threat to the society.”

The Court, accordingly, directed the Commissioner (Appeals) to pay Rs. One lakh from his personal fund with the Registrar of High Court within one month. On payment, the amount will be transferred to the Prime Minister’s Relief Fund.