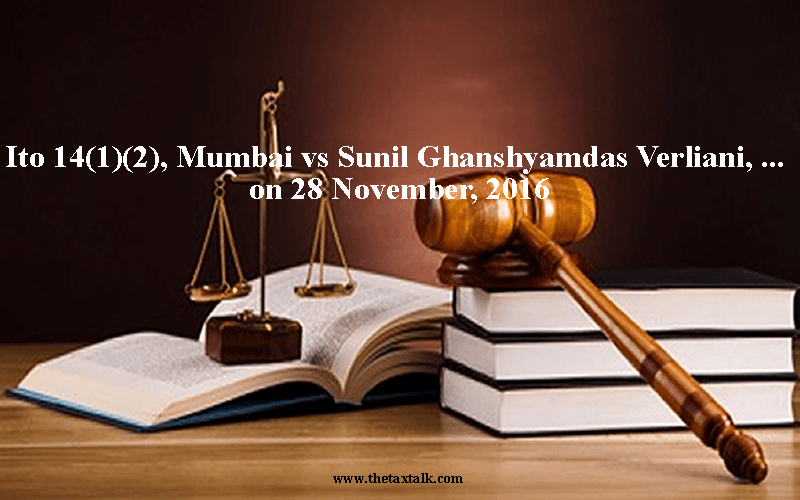 “1. On the facts and in the circumstances of the case and in law, the Id. CIT(A) has erred in deleting the addition of Rs.1,48,40,000/- as unrecorded investments made u/s 59B, on the basis of DVO’s report, after having accepting the finding of the A.O. in principle that the property was acquired in the year 2009 and not in the year 2004 as claimed by the assessee.

“4.5 I have perused the assessment order, submissions of appellant, remand report, facts and circumstances of the case carefully. The appellant has contended that the impugned commercial premises was acquired from developer at a very discounted rate consequent upon negotiation between them wherein the appellant surrendered an unauthorized shed admeasuring 100 sq. feet approx. on said land, and a reference of the same is also made in the Agreement dated 30.12.2009 for purchase of said commercial unit. The appellant claims that the said property was booked in year 2004, at which time the stamp duty value was near to the final consideration paid of Rs.95,00,000/- The appellant has vehemently denied having

paid any consideration over and above the agreed consideration. On the other hand, the AO did not accept the existence of the alleged unauthorized shed of appellant, and contended that the appellant had made undisclosed investment to the extent of difference between value determined by DVO at Rs.2,43,40,000/- and the Agreement Value of Rs.95,00,000/- Further, the AO contended that even assuming without conceding that the assessee owned such ITA No. 3813/Mum/2014 a shed, the surrender in itself was a separate transaction and gains thereon are liable to be taxed and therefore the purchase consideration of said commercial premises to the extent of value pf shed so surrendered was not accounted in the books of assessee and therefore this difference was squarely covered u/s 69B of the Act. Subsequently, in Remand, Report in para 6. 1, the AO seems to have accepted that the difference in agreement value of Rs.95,00,000/- and stamp duty value of Rs.2,03,75,400/- is on account of negotiation between the assessee and developer for surrender of the100 sq.ft.

Carpet area and contended that the same is taxable in hands of assessee u/s 69B. The AO further provided evidence to show that the property was acquired in year 2009 and not in year 2004 as claimed by the appellant. Finally, the AO in para 16 of remand report, has not ruled out the possibility of restricting the addition made to Rs.1,08,75,400/- (i.e. Stamp Duty Value minus Agreement Value), as against the addition made of Rs. 1,48,40,000/- (i.e. Value of Investment estimated by DVO minus Agreement Value). 4.6.1 find that the rival arguments revolve around the existence or not of the alleged unauthorized shed. Hence, it would be appropriate to analyze the facts of present case under both such situations one by one:

(i). Assuming the alleged unauthorized structure did not exist at all: In such case, the appellant has bought the property for consideration less than the stamp duty value. The differential value cannot be taxed u/s 56(2)(vii)(b), since as on the relevant date of agreement i.e. 30.12.2009, as per amended provisions w. e. f. 1-10-2009, only the immovable property received “without consideration” is to be taxed, and hence the appellant’s case of inadequate consideration does not fall within preview of said section. I also find that the said section has subsequently been amended by Finance Act 2013 to cover the cases of inadequate consideration also, but the same is effective from 1-4- 2014, hence not applicable to A.Y. 2010-11 under consideration. The provisions of Sec. 50C cannot be invoked in hands of buyer. As regards to the applicability of Sec.6913, the appellant has contended that the said section can be applied when assessee expend amount on asset and not record the same in books of account, however he has not paid any amount over and above Rs.95,00,000/- to the developer and further he has disclosed all the payment made to the developer. I find that even assuming that the said unauthorized structure did not exist, there is no concrete evidence to prove that any additional amount was paid to the developer except the apparent difference in purchase value and stamp duty/market value of property, in which case it is difficult to sustain addition even u/s 69B.

(ii). Assuming the alleged unauthorized structure existed and was surrendered by appellant: In such case, the provisions of Sec. 56(2)(vii)(b) & 50C cannot be invoked for reasons same as stated above. Now the question remains as to the applicability of Sec. 69B. I understand that Sec. 69B covers investments not fully disclosed in books of accounts, and in present situation since the investment in commercial unit to the extent of surrender value of unauthorized structure would be explained, it would not fall within the preview of said ITA No. 3813/Mum/2014 section. The appellant has not received any separate sale consideration in respect of surrender of unauthorized construction, and negotiated to reduce the cost of acquisition of commercial property. Whenever the appellant would sell the said commercial property, he would be entitled to claim the reduced cost and indexation benefit thereon while calculating the capital gain. In my opinion, in absence of express provisions of statute to bring the alleged sale consideration of unauthorized structure adjusted against the purchase value of commercial property, it may not be justified to tax the same in current assessment year.

4.7 In view of the aforesaid, since the taxability in present assessment year is not attracted under any of the above situations, the year of acquisition whether year 2004 or year 2009 is not a deciding factor for adjudication of present appeal. However, I consider that the year of acquisition of said commercial unit should be considered in F.Y. 2009-10, as the entire consideration pursuant to agreement dated 3 0.12.2009 has been paid in the said year and there is no reference made in the agreement of the alleged booking amount paid in year 2004.

4.8 Accordingly, the entire addition made in assessment order of Rs.1,48,40,000/- is deleted and the grounds of appeal are allowed.”

Aggrieved, Revenue is in second appeal before Tribunal.