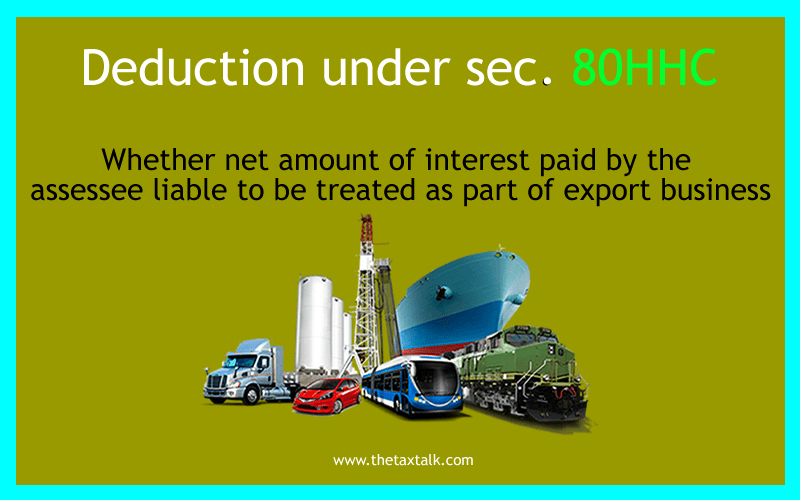 Whether net amount of interest paid by the assessee liable to be treated as part of export business?

1.Under the provisions of section 80HHC of the Income-tax Act, 1961, 100 percent. deduction is allowed to exporters in respect of profits derived from export of goods or merchandise. As a measure to provide incentive to supporting manufacturers selling goods or merchandise to an export house/trading house for export, the benefit of deduction under section 80HHC was extended with effect from 1st April, 1989 to such supporting manufacturers.

2.The essential ingredients of section 80HHC are as follows:

(i) The assessee should be an Indian company or a person (other than a company) resident in India.

(ii) He should be engage in the business of export out of India of any goods or merchandise (other than mineral oils, minerals and ores);

(iv) Under the existing provisions, deduction under section 80HHC is allowed if the sale proceeds are receivable in convertible foreign exchange. With effect from the assessment year 1991-92, the deduction under this section shall be allowed only if the sale proceeds are received in or brought into India within a period of six months from the end of the relevant previous year. However, in case of genuine hardship, the Chief Commissioner or the Commissioner may allow further time for the remittance of foreign exchange if he is satisfied that the assessee was unable to bring the foreign exchange within the period of six months for reasons beyond his control. While allowing further period in this regard, the Chief Commissioner or the Commissioner shall record reasons for the same in writing;

Whether net amount of interest pay by the assessee liable to be treat as part of export business?

My client is a proprietor of M/s.ABC & Co. He has 100% export sale under M/s.ABC & Co. during the year 1991-92. He has surplus fund in this company which he has given on interest to some parties. He also enjoys credit facility from bank on which he has paid interest. During the year interest take was Rs.4,000 and interest pay 9,000. He keeps only an interest account and accordingly net interest of Rs.5,000 is taken as expenditure in the P&L A/c. He has profit of Rs.60,000 during the year as per P&L A/c. We think that interest received on funds given on interest should not be considere as income from export business and hence net income from export business should calculated like this :

Sec. 80HHC lays down that the assessee carrying on export business to which the above section is applicable shall be entitle to claim deduction under that section for the amount of interest paid by him on the capital borrowed for the purpose of business. It must be noted that the deduction u/s 80HHC is provide to an assessee in respect of profits derived by an assessee from the business of export of goods out of India. In the case of the querist the assessee has claimed deduction of Rs. 4,000 in the computation of the profits of the business carried on by him.