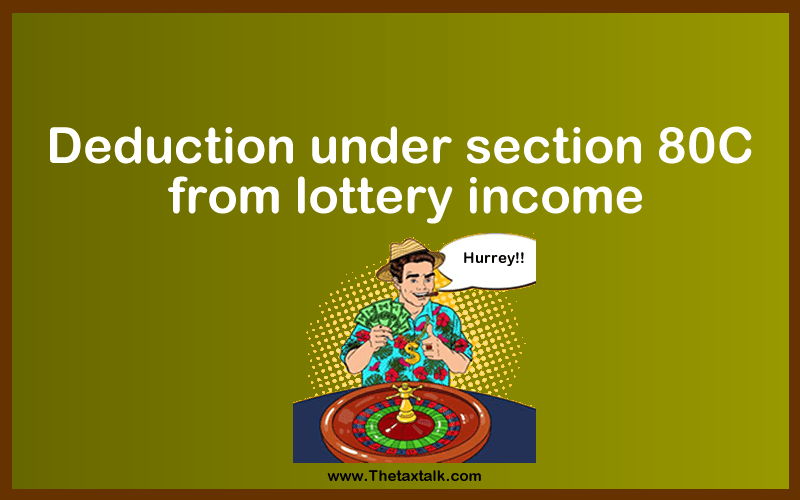 It is stated that one of my clients have enjoyed the following income during the financial year 2006-07 relevant for the asst. yr. 2007-08:

In the earlier years tax rebate was allowable under ss. 88, 88B and 88C out of the tax on lottery income and there is no change in the IT Act on this issue till date nor there is any prohibition on basic exemption or for deduction under s. 80C out of lottery income as in the case of capital gain tax. Suppose if the only income of a person is winning from lottery, will he be deprived of basic exemption of Rs. 1,50,000 as well as deduction of investment of Rs. 1,50,000 made under s. 80C ?

Kindly give your considered opinion on this issue with some case laws, if any.

The income of the assessee for the financial year 2006-07 consists of (i) Rs. 60,000 as business income, (ii) Rs. 2,000 as interest income and (iii) five lakh rupees as income by way of winning from lottery. Sec. 4 of the IT Act, which is the charging section, lays down that where any Central Act enacts that income-tax shall be charged for any assessment year at any rate or rates, income-tax shall at that rate or those rates shall be charged for that year in accordance with, and subject to the provisions (including provisions for the levy of additional income-tax) of the IT Act in respect of the total income of the previous year of any person. The Central Act in this case is the Finance Act, 2007 and the First Schedule of said Act, provides that where total income does not exceed one lakh fifty thousand rupees, the tax would be nil. This provision in the Finance Act, 2007 is subject to provision of s. 115BB of the IT Act which finds place in Chapter XII under the heading “Determination of tax in certain cases”. The provision in s. 115BB would thus prevail over provision in the First Schedule of Finance Act, 2007, referred to above. Thus basic exemption of one lakh fifty thousand would not be available where the only income is income from lottery referred to in s. 115BB. This section contains special provision for calculation of tax where total income includes income by way of winnings from any lottery. It lays down that in such a case income-tax payable would be aggregate of (i) the amount of income-tax calculated on income by way of winnings from lottery at the rate of thirty per cent; and (ii) the amount of income-tax with which the assessee would have been chargeable had the total income been reduced by the amount of income by way of winnings from lottery. Thus in this case, income-tax payable would be 30 per cent of five lakh rupees. Since the total income as reduced by income from lottery is sixty two thousand rupees, which is less than one lakh fifty thousand rupees, no income-tax shall be payable on said income in view of provisions of First Schedule of the Finance Act, 2007. The exemption of one lakh fifty thousand rupees under the First Schedule of Finance Act, 2007 is available to total income as reduced by lottery income and not to total income inclusive of lottery income in view of special provisions in s. 115BB to which provisions of First Schedule of Finance Act, 2007 are subject.

Secs. 88, 88B and 88C to which reference has been made in the query and which now stand omitted had provided for rebate of income-tax. Obviously such rebate would be available on total tax payable in accordance with s. 115BB and in accordance with First Schedule of relevant Finance Act. Section 88 has been replaced by s. 80C and s. 80C provides for deduction of one lakh fifty thousand rupees in relation to investments which are made in accordance with that section in computing total income. This section contains general provision while s. 115BB contains special provision. Even when one lakh fifty thousand rupees is deducted in this case in computing total income, calculation of tax payable would have to be made in accordance with s. 115BB and for that purpose tax shall have to be calculated separately for lottery income comprised in total income and for income other than lottery income. Hence in substance deduction under s. 80C would be in respect of income other than lottery income.

It may be noted that special provisions for calculation of tax in Chapter XII are not only for lottery income but also in relation to capital gains, undisclosed income in search cases, certain income of foreign companies etc.