ASSESSMENT ON DEATH OF KARTA OF HINDU UNDIVIDED FAMILY 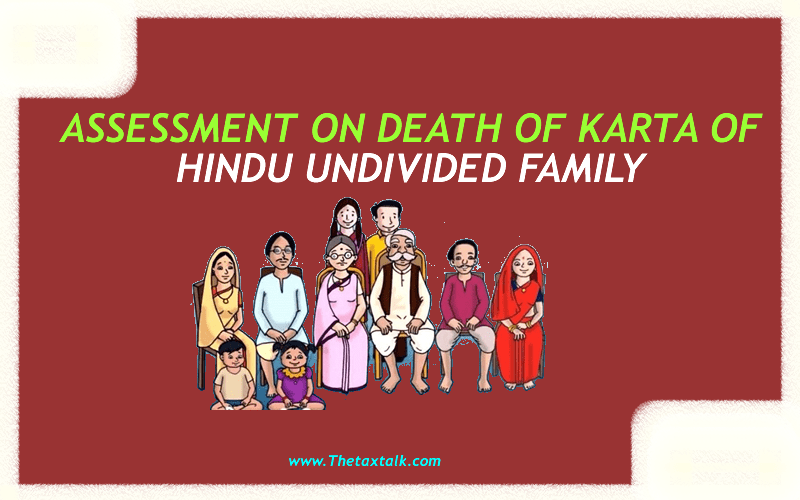 ASSESSMENT ON DEATH OF KARTA OF HINDU UNDIVIDED FAMILY

A Hindu Undivided Family (HUF) is a separate legal entity different and distinct from its members. It is an entity in which the number of members in the family would increase by births, marriages, adoption, etc. and decrease by death and even marriages of female members.

The increase or decrease in the numbers of members in the family does not affect the existence of the family and its liability to tax as a legal entity. The death even of the Karta of the joint family would not affect the assessment of the HUF except that the Karta would be substituted by a new one and, in case there is no major male member, even the female member can be the manager of the family to represent the joint family for all purposes of assessment, etc.

The death of the Karta does result in a partition which is deemed to take place under section 6 of the Hindu Succession Act as a result of which his share of the joint family property immediately prior to his death is regarded as having been the subject-matter of devolution amongst his legal heirs arising from such a deemed partition. As a result, the share of the Karta in the joint family on such a notional partition would fall to his widow and child/children who may be minor(s).

An interesting issue arose whether on account of such a notional partition, the income of the minor attributable to the property so devolving on the death of the Karta would be includible in the income of the HUF for assessment and whether a HUF can plead that there is no partition in effect by the members of the joint family brought about by them and, therefore, the Assessing Officer is not required to pass an order accepting and recording the partition of the HUF.

Consequently, the income of the minor(s) devolving on the death of the Karta should be excluded in the hands of the HUF. Such pleas advanced by the HUF and/or its members have been held to be untenable and that the HUF would continue to be taxable notwithstanding the death of the Karta and devolution of his share to his legal heirs. The Supreme Court has further held that the order recording partition under section 171 of the Income-tax Act is essential not only in cases of actual partition of the family but also in cases of deemed partition. This view now expressed by the Supreme Court.

So long as the family remains an assessable entity, assessment has to be made only on the joint family notwithstanding the death of any member including the Karta. The family cannot be regarded as having been disrupted or partitioned in such a manner as to treat the family as not being in existence in law so as to subject the income in the hands of the respective member/s by adding his/her share of the income in the individual assessment of the respective member.

This is because of the fact that the statute does not give an option to the tax authorities to make an assessment either on the HUF or on its members in respect of the income derived by the family, whichever is more beneficial to the Revenue. Therefore, the person/s to be subjected to tax cannot be determined based on the criteria of benefit or loss to the Revenue.

There are cases where an HUF consists of the Karta, his wife and minor son and on the death of the Karta, the family is reduced in strength to only two members of whom the widow of the Karta is one and the minor child/son is another.

The assessment of the income of the minor from the properties falling to his share on the death of the Karta arising from a deemed partition under section 6 of the Hindu Succession Act would arise for consideration specially because the minor at times, claims to have inherited the property on the death of his father and that share would be assessable in his individual capacity, through the guardian.

The Revenue also prefers in many cases to make assessment on the death of the Karta by dividing the income amongst the legal heirs of the deceased Karta as if a partition has taken place, so as to subject each member to tax in respect of the respective share arising from such partition.

The HUF is a legal entity which continues to exist regardless of the increase or decrease in the number of its members as a result of births, deaths and marriages/adoptions and, therefore, the death of one of the members, including the Karta, would not alter the status of the HUF for the purpose of assessment nor can it entitle the HUF to plead that the property of the joint family falling to the share of the deceased member/Karta inherited by his legal heir/s would be outside the purview of the taxable income/wealth of the HUF.

This is because of the fact that the death or birth of a member may only affect the change in the number of members in the family but does not in any manner affect the existence of the HUF as an entity in law.

The joint family properties would at any given time be shared or enjoyed only by those members who are living and existing. The death of a member/coparcener would create a fiction of a deemed partition under Hindu law resulting in the share of the deceased member in the joint family property being inherited by devolution amongst his/her legal heirs in accordance with the Hindu Succession Act, 1956.

The manner and basis of such devolution of property of the deceased member of the HUF is relevant for the purpose of Hindu law only. For the purpose of income-tax or wealth-tax, the devolution is of no consequence since the family must continue to be regarded as remaining joint as an assessable entity until and unless an order recording partition of the HUF is passed under section 171 of the Income-tax Act.

It is, therefore, clear that in view of the aforesaid decision of the Supreme Court and the law declared, the death of the Karta/member of the HUF would not in any manner affect the status of the HUF and the assessment to be made thereon including also in respect of the share of property of the HUF which by virtue of a deemed partition assumed under section 6 of the Hindu Succession Act would fall to the legal heirs of the deceased member/s.