Assessment based on Information from the Investigation Wing of Income Tax is Valid: ITAT 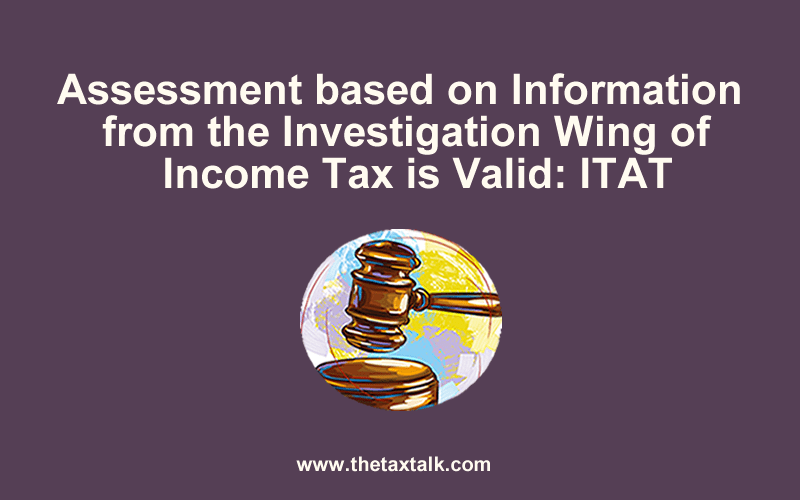 Assessment based on Information from the Investigation Wing of Income Tax is Valid: ITAT

The New Delhi bench of ITAT in DCIT versus M/s. Erawat Infotech Pvt. Ltd ruled that assessment based on the information from the investigation wing of the income tax is valid.
In instant case as per the information from investigation wing of the Income Tax Department assessee had received accommodation entries in the form of share application money, assessing officer initiated re-opening under section 147 of the Act by way of issuing notice under section 148 of the Act.
During the assessment proceedings to establish the genuineness of the transaction assessee filed confirmation letter, bank statement, copy of return etc. along with the memorandum of Articles. Summon issued by the AO was returned from the three parties and the assessee was requested to produce the said parties, however, the assessee expressed its inability. Accordingly, AO made addition under section 68 of the Act as the unexplained cash credit.
Aggrieved assesse carried the matter to the appellate authority and upheld the decision of AO and with respect to the re-opening CIT (A) found that AO doesn’t have made any independent enquiries and thus re-opening shouldn’t be held.
Now the matter is on appeal before this tribunal by revenue and the counsel contended that the information received was from the credible source after carrying out enquiries, and the information was fresh in the nature.
The bench including Judicial Member Amit Shukla and Accountant Member O.P Kant heard the rival submission and perused the documents on record. The bench gone through the reasons recorded for the belief that income had escaped assessment through the paper book.
The bench also examined the various cases which are identical to the fact of the case and observed as “In our opinion, the reassessment proceeding is a kind of enquiry, where the assessee is granted opportunity to explain his stand on the correctness of reasons to believe escapement of income. Further, the Assessing Officer is not empowered in law to carry out any enquiry, if no assessment proceeding are pending. The reassessment proceedings thus, empower the Assessing Officer to verify correctness of the information. In view of the aforesaid discussion, in our opinion the Ld. CIT(A) is not justified in holding that reassessment proceeding are invalid. Accordingly, we set-aside the order of the Ld. CIT(A) to the extent of holding the proceedings under section 147 of the Act is invalid.”