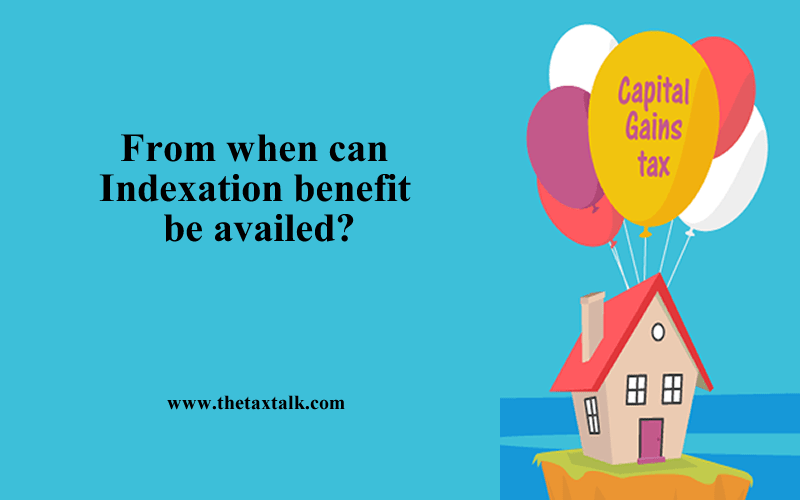 The above mentioned point is not given in law. It is a remarkable judgement given by Mumbai bench of the Income Tax Appellate Tribunal ( ITAT ) in the case of Lakshman M. Charanjiva versus Income Tax Officer.

The bench held that indexation benefit against the cost of acquisition shall be given on its index of the year in which payment was actually made. In this case, assessee sold a property and made the calculations of Capital Gain.  However, the indexed cost of acquisition was wrongly calculated.

The purchase price was remitted in instalments during the period between financial years 2006-07 to 2011-12. The assessee made the calculations considering the index of the FY 2007-2008 while Assessing Officer calculated indexed cost based on the respective years of the index.

Want to read the interesting judgment, read it below:

An additional ground of appeal has been filed by the Ld. Auhtorized Representative for Assessee [AR] which reads as under:-

The Ld. Departmental Representative [DR] has opposed the same. However, we find that the submissions in this regard were duly made by the assessee before lower authorities also and therefore, we admit the same in terms of judgment of Hon’ble Apex Court rendered in NTPC Ltd Vs CIT [229 ITR 383]. The assessment for impugned AY was framed by Ld. Income Tax Officer (International Taxation)-2(1)(1),Mumbai [AO] u/s 143(3) of the Income Tax Act,1961 on 11/03/2016 wherein the income of the assessee has been determined at Rs.167.56 Lacs after certain adjustments ITA No.28/Mum/2017 Lakshman M. Charanjiva Assessment Year-2013-14 as against returned income of Rs.102.98 Lacs filed by the assessee on 20/07/2013. The only subject matter of the appeal is manner of computation of cost of acquisition of the certain capital asset sold by the assessee during impugned AY which has been assessed under the head Capital Gains. The status of assessee in the impugned AY was a non-resident assessee deriving income from capital gains & other sources. 2.1 Brief facts are that during impugned AY, the assessee sold a property Flat No. 8002 situated at Lodha Bellissimo, 30th Floor, A-wing, Jivraj Boricha Marg, Off. N.M.Joshi Marg, Mahalaxmi, Mumbai-400 011 on 25/07/2012 for sale consideration of Rs.732 Lacs, which is undisputed. The said property was stated to be purchased by the assessee for Rs.367.14 Lacs (excluding incidental expenses) in the year 2007 vide registered Agreement dated 18/10/2007. The purchase price was construction linked and paid to the builder in installments during period between financial years 2006-07 to 2011-12, the schedule of which has been extracted at para-4.1 of the quantum assessment order. However, the assessee indexed the full cost of Rs.419.32 Lacs by applying index of FY 2007-08 (index=551) and worked out cost of acquisition for the purpose of capital gains as Rs.648.38 Lacs. From the computations, it is evident that broker fees as well as Tax Advisor Fees aggregating to Rs.8.88 Lacs paid by the assessee at the time of sale / transfer, have also been indexed by applying the index for FY 2007-08. Similarly, incidental expenses paid in the shape of interest charges, legal, electric & water connection, maintenance, infrastructure ITA No.28/Mum/2017 Lakshman M. Charanjiva Assessment Year-2013-14 charges, society formation, service tax, property tax, stamp duty, MVAT etc. paid during FY 2011-12 were also indexed by applying the index for FY 2007-08. Accordingly, the net capital gains of Rs.83.61 Lacs, as per above computations made by assessee, was offered in the return of income as Long Term Capital Gains [LTCG].

2.2 However, not convinced with working of the assessee, Ld. AO, by applying index of respective years in which the payments were actually made, worked out LTCG of Rs.148.20 Lacs and added the differential amount of Rs.64.58 Lacs in the hands of the assessee. The indexation against the incidental expenses i.e. broker’s fees / lawyer fees / tax advisor fees aggregating to Rs.8.88 Lacs was denied to the assessee

6.2 1 have gone through the issue. While purchasing the property, some of payments were made by the assessee after 2007-08, but as per working of tong tern capital gains, the assessee had claimed indexed cost at Rs.6,48,38,735/- from the date on which the purchase agreement was registered i.e.2007-08. The first date of payment was Rs.29.09.2006 and the last date of payment was 29.8.2012. And, the AO has allowed the indexation as per the dates of payments for acquiring the property. The assessee has placed his reliance on the decision of the Hon’ble ITAT, Mumbai Bench-D Mumbai in the case of ACIT Cir 9(3), Mumbai vs. Ramprakash Bubna in ITA No.6578/Mum/2010 vide order dated 11.05.2012, wherein the Hon’ble ITAT has held as under: –

“Respectfully following the chow decisions we hold that the benefit of indexation will be given from the date when the assessee entered into the agreement for acquiring the two flats in question and not on the basis of various date of payments made for acquiring the said properties and the computation filed by the assessee in the revised return is accordingly upheld. Thus, we affirm the findings of the CIT and consequently, the ground raised by the Department is dismissed”

6.3 In the case of Shri Vikas P. Bajaj vs. ACIT in ITA No.6120/Mum/2010 dated 08.02.2013, it is held that the benefit of indexation has to be granted to the assessee on the basis of payments made by him for acquiring the asset. The relevant paragraphs of the said order reproduced below: –

“6. We have considered the rival submissions and also perused the relevant material on record. It is observed that the issue involved in the present case as well as all the facts relevant thereto are similar to that of the case of Praveen Gupta (supra) inasmuch as the assessee in the said case had entered into an agreement for purchase of flat in the year 1995-96 and after paying the purchase price of the flat in installments in the year 1996-97, 1997-98, 1999-2000 and 2001-02, the possession of the flat was taken in December, 2001. The said flat was subsequently sold by the assessee in the previous year relevant to assessment year 2007-08 and while computing the long term capital gain arising from the said sale, indexed cost of acquisition was claimed by the assessee as deduction as worked out by taking into consideration the dates of purchase agreement and instalments paid. The AO as well as the learned CIT (Appeals), however, worked out the indexed cost of acquisition taking into consideration the date of taking of possession of flat and when the matter reached to the Tribunal in an appeal filed by the assessee, the Tribunal accepted the claim of the assessee for the following reasons given in paragraph No. 26 to 29.

“(iii) ‘indexed cost of acquisition’ means an amount which bears to the cost of acquisition the same proportion as cost inflation index for the year in which the asset is transferred bears to the cost inflation index for the first year in which the asset was held by the assessee or for the year beginning on the 1st day of April 1981, whichever is later.”

ITA No.28/Mum/2017 Lakshman M. Charanjiva Assessment Year-2013-14 “2(14) ‘capital asset’ means property of any kind held by an assessee, whether or not connected with his business or profession, but does not include-

(i) Any stock-in-trade, consumable stores or raw materials held for the purposes of his business or profession;

(ii) Personal effects, that is to say, movable property (including erring apparel and furniture) held for personal use by the assessee or any member of his family dependent on him, but excludes-

Thus, going into the provisions, it is not necessary that to constitute a capital asset the assessee must be the owner by way of a conveyance deed in respect of that asset for the purpose of computing capital gain. The assessee had acquired a right to get a particular flat from the builder and that right of the assessee itself is a capital asset. The word ‘held’ used in s. 2(14) as well as Explanation to s. 48 clearly depicts that assessee must have some right in the capital asset which is subject to transfer. By making the payment to the builder and having received allotment letter in lieu thereof, the assessee will be holding capital asset and, therefore, the benefit of indexation has to be granted to the assessee on the basis of payments made by him for acquiring the said asset and the assessee has rightly claimed the indexation benefit from the dates when he has made the payments to the builder. Therefore, we see force in the claim of the assessee. The AO is directed to provide the benefit of indexation to the assessee in the manner in which the assessee has claimed. The coordinate bench of this Tribunal thus has decided a similar issue involving identical facts in favour of the assessee in the case of PraveenITA No.28/Mum/2017 Lakshman M. Charanjiva Assessment Year-2013-14 Gupta (supra) and that too after taking into consideration the provisions of Explanation (iii) to section 28 which have been relied upon by the learned DR at the time of hearing before us in support of the Revenue’s case. The issue involved in the present case thus is squarely covered in favour of the assessee by the said decision of the Tribunal and respectfully following the same, we direct the AO to allow deduction on account of indexed cost of acquisition while computing the capital gain as claimed by the assessee.”

6.4 As the above decision of the Hon’ble ITAT is subsequent to the decision in the case of Ramprakash Bubna (supra), respectfully following the above decision of the Hon’ble ITAT, the AO’s action of computation of capital gain as per the dates of payments is upheld. However, it is noticed that out of the total payments, Rs.18,32,137/- and Rs.13,44,187/- have been made in FY 2011-12, which are less than 36 months from the date of sale. Hence, the AO is directed not to allow indexation of these two payments. Accordingly, Ground NO.1 is dismissed.

Aggrieved, the assessee is in further appeal before us.

Respectfully following the wisdom of higher judicial forum, we hold that the indexation benefit against the cost of acquisition shall be available to the assessee on the basis of index of the year in which the payments were actually made by the assessee. The payment made up-to the date of agreement i.e. 18/10/2007 shall be indexed by applying the index for Financial Year 2007-08. Accordingly, subsequent payments made in ITA No.28/Mum/2017 Lakshman M. Charanjiva Assessment Year-2013-14 different financial years shall be indexed by applying the respective indexes of those years. Ground Number-1 stand dismissed.

Order pronounced in the open court on 03rd October, 2018.