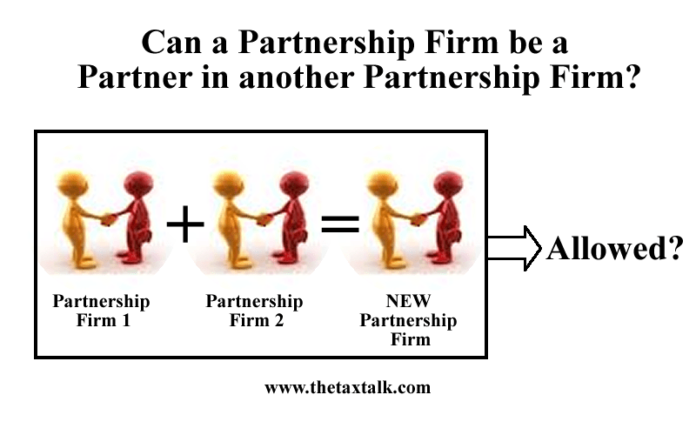 In the earlier article we have answered the question whether HUF can be the partner in the partnership firm. You can refer it here: https://thetaxtalk.com/2018/10/12/can-huf-be-a-partner-in-a-partnership-firm/

Therefore, individuals and Companies can be the partner in partnership firm.

A firm is not the person having a legal existence and therefore cannot as such become a partner in another partnership firm. This was held in the case of Dulichand Laxminarayan vs. CIT (Supreme Court).

In this cas it was mentioned that firm is not an entity or “person” in law but is merely an association of individuals and a firm name is only a collective name of those individuals who constitute the firm. In other words, a firm name is merely an expression, only a compendious mode of designating the persons who have agreed to carry on business in partnership. Only one partner of such firm signing on behalf of the firm is not proper compliance.

However, on true reading of the partnership deed it is found that the constituent partners of the firm are signing the agreement and not the firm, the refusal to register the firm on the ground that the firm cannot be a partner is erroneous.

This is an appeal from the judgment and order passed by a Bench of the Nagpur High Court on the 30th Dec., 1953, in Miscellaneous Civil Case No. 35 of 1952, whereby the Bench answered in the negative the question that had been referred to them by the Tribunal, Bombay, under s. 66(I) of the Indian IT Act, 1922 (hereinafter referred to as the Act).

Then follow 15 clauses containing the terms on which the partnership business was agreed to be done. At the foot of the deed, signatures were appended in the following order one below the other :

It is common ground that out of the five constituent parties Dulichand Laxminarayan, Jairamdas Hiralal and Laxminarayan Chandulal are separate firms constituted under three separate deeds of partnership and that Laxminarayan, Beharilal and Chandulal, who signed the deed on behalf of those firms are partners in their respective firms. There is also no dispute that Mukhram Bholaram is the name of a business carried on by a HUF of which Tekchand, who has signed for it, is the karta. It is also conceded that Mangatrai Ganpatram is an individual. The application for registration was signed by the same five individuals who had signed the deed of partnership.

‘‘Whether, on the facts of the case, the assessee is entitled to registration under s. 26A of the IT Act ?”

“(1) Application may be made to the ITO on behalf of any firm, constituted under an instrument of partnership specifying the individual shares of the partners, for registration for the purposes of this Act and of any other enactment for the time being in force relating to income-tax or super-tax.

The relevant portion of r. 2 of the Rules made under s. 59 of the Act runs thus:

(12) “Any firm constituted under an instrument of partnership specifying the individual shares of the partners may, under the provisions of s. 26A of the Indian IT Act, 1922 (hereinafter in these rules referred to as the Act), register with the ITO, the particulars contained in the said instrument on application made in this behalf.

(13) Such application shall be signed by all the partners (not being minors) personally, or……”

(14) Sec. 26A of the Act quoted above postulates the existence of a firm, for otherwise no question of its registration can possibly arise. The Act, however, does not indicate what a firm signifies or how it is to be constituted. Indeed s. 2(6B) of the Act clearly provides, inter alia, that “firm” and “partnership” have the same meanings respectively as they have in the Indian Partnership Act, 1932. We have, therefore, to go to the last mentioned Act to ascertain what a firm is and how it can be created.

“Partnership” is the relation between persons who have agreed to share the profits of a business carried on by all or any of them acting for all.

Persons who have entered into partnership with one another are called individually “partners” and collectively “a firm”, and the name under which their business is carried on is called the “firm-name.”

As pointed out in Lindley on Partnership, 11th Edn. at page 153, merchants and lawyers have different notions respecting the nature of a firm. Commercial men and accountants are apt to look upon a firm in the light in which lawyers look upon a corporation, i.e., as a body distinct from the members composing it. In other words merchants are used to regard a firm, for purposes of business, as having a separate and independent existence apart from its partners. In some systems of law this separate personality of a firm apart from its members has received full and formal recognition, as, for instance, in Scotland. That is, however, not the English common law conception of a firm. English lawyers do not recognize a firm as an entity distinct from the members composing it. Our partnership law is based on English law and we have also adopted the notions of English lawyers as regards a partnership firm.

Some of the mercantile usages relating to a firm have, however, found their way into the law of partnership. Thus in keeping accounts, merchants habitually show a firm as a debtor to each partner for what he brings into the common stock and each partner is shown as a debtor to the firm for all that he takes out of that stock. But under the English common law, a firm, not being a legal entity, could not sue or be sued in the firm name or sue or be sued by its own partner, for one cannot sue oneself. Later on this rigid law of procedure, however, gave way to considerations of commercial convenience and permitted a firm to sue or be sued in the firm name, as if it were a corporate body (see the Code of Civil Procedure, Order XXX, corresponding to Rules of the English Supreme Court, Order XLVIII-A). The law of procedure has gone to the length of allowing a firm to sue or be sued by another firm having some common partners or even to sue or be sued by one or more of its own partners (see Order XXX, r. 9, of the Code of Civil Procedure), as if the firm is an entity distinct from its partners. Again, in taking partnership accounts and in administering partnership assets, the law has, to some extent, adopted the mercantile view and the liabilities of the firm are regarded as the liabilities of the partners only in case they cannot be met and discharged by the firm out of its assets. The creditors of the firm are, in the first place, paid out of the partnership assets and if there is any surplus then the share of each partner in such surplus is applied in payment of his separate debts, if any, or paid to him. Conversely, separate property of a partner is applied first in the payment of his separate debts and the surplus, if any, is utilised in meeting the debts of the firm (see s. 49 of the Indian Partnership Act, 1932). In the Indian IT Act itself a firm is, by s. 3, which is the charging section, made a unit of assessment.