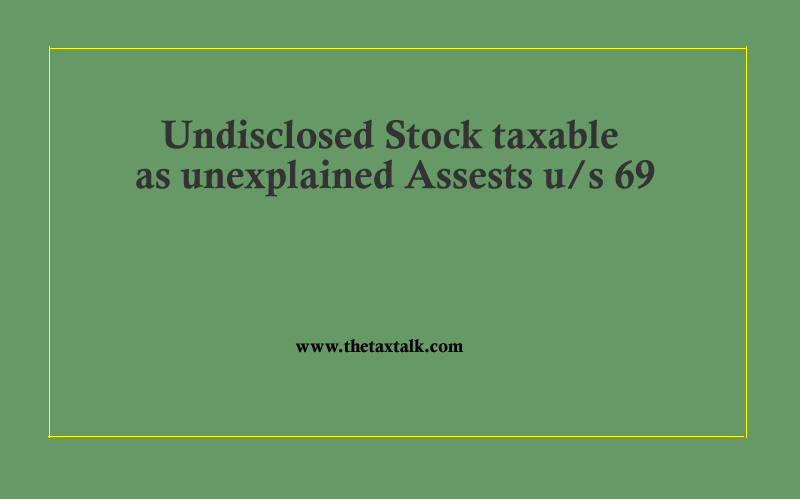 Income Tax Act has been amended drastically as far as section 69 are concerned whereby the tax rate could exceed the amount of income.

The question has become all the more relevant and important as the tax rate could range from 30% to 138%.

There are judgement which concludes with the fact that the undisclosed stock is taxable u/s 69.

Here are 3 important judgments for the readers:

(2) Whether the finding that the sum of Rs. 1,06,066 (Rupees one lakh six thousand and sixty-six) represented income of the applicant is based on suspicion, surmises and/or improper consideration of the evidence on record and is, therefore, unjustified in law ?”

The assessee is a Hindu undivided family (HUF) and one Kacharulal Tejmal, after whom the HUF is named, was the karta of the HUF. The assessment year with which we are concerned is the assessment year 1962-63 and the relevant previous year was the Samwat year 2017, which ended on 8th November, 1961. In respect of the income earned during the relevant previous year, the assessee stated that its sources of income were business in cotton, business of building contracts and as a partner in four firms, one of which was Shri Ramanlal & Company. We propeso to refer to the said firm hereafter as “Ramanlal & Company”. The assessee was supplying finance to three out of the said four firms in which it was a partner. For the purpose of obtaining finances the assessee borrowed moneys from banks in its overdraft accounts. These loans were obtained by pledge of goods. The ITO obtained information that the particulars of goods pledged by the assessee with the banks in its overdraft accounts as on 8th November, 1961, were as follows :

This shows that in all, as on 8th November, 1961, there were 268 fully pressed cotton bales pledged by the assessee in its said accounts, and the total value thereof was Rs. 1,45,465. According to the assessee, these goods pledged with the banks did not belong to the assessee but to Ramanlal & Company. However, according to the books of the account of Ramanlal & Company, the stocks of that firm as on 8th November, 1961, were as below :

Question No. 1 : In the affirmative and against the assessee.

Questin No. 2 : In the negative and against the assessee. The assessee to pay the costs of the reference to the Commissioner.

Decision in favour of Revenue

Counsel appeared : S.S. Narula, for the Assessee : Denesh Goyal, for the Revenue

This appeal has been preferred by the assessee under s. 260A of the IT Act, 1961 (for short, “the Act”) against the order dt. 30th Jan., 2004 of the Tribunal, Chandigarh in ITA No. 16/Chd/1999 for the asst. yr. 1995-96 proposing to raise following substantial questions of law : “(a) Whether the variation between the stocks hypothecated with the bank and the stock shown in the books of accounts empowers the AO to invoke the provisions of s. 69 of the IT Act, 1961 and make additions of difference in stock as appeared in the books of accounts towards unexplained investment in the stocks ?

(b) Whether the assessing authority was right in equating the hypothecation of stock with that of pledging of stock when the two situations are not identical and have separate meaning and thus erred in invoking the provisions of s. 69 of the IT Act, 1961 ? (c) Whether the order passed by the AO as restored by the learned Tribunal is without jurisdiction and the stock statement furnished to the bank in the case of hypothecation of stock falls within the meaning of investment or expenditure ? (d) Whether the impugned action of the assessing authority orthe learned Tribunal are not without jurisdiction and non-application of mind ?”

We have heard learned counsel for the parties. Learned counsel for the assessee submits that mere difference in the value of stock furnished to the bank and shown in the books of account, was not sufficient to make addition. Reliance has been placed on judgment of Madras High Court in CIT vs. N. Swamy (2000) 241 ITR 363 (Mad) and judgment of this Court dt. 12th Oct., 2006 in CIT vs. Chauhan Papers (P) Ltd. IT Appeal No. 358 of 2006. We are unable to accept the submissions. Whether difference in the statement of value of stock furnished to the bank and entries in the books of account, justify addition, is a question of fact in each individual case.

The object of assessment is to tax the real income of the assessee. The AO has to determine the same on the basis of books of accounts and other material available. Burden of showing taxable income is on the Revenue. The said burden can be discharged by drawing appropriate inference from the material on record. Reference may be made to judgment of the Hon’ble Supreme Court in Kundan Lal Rallaram vs. Custodian, Evacuee Property AIR 1961 SC 1316.

In the present case, the AO drew inference from statement furnished by the assessee to the bank and made addition on that basis. The Tribunal has held that the AO not only had the bank statement before him but also the verification thereof by the regional officer that the stock was actually lying with the assessee. The assessee was given due opportunity to explain the difference, but it could not give any satisfactory explanation. In these circumstances, the CIT(A) was not justified in deleting the addition.

The finding recorded by the Tribunal being a finding of fact does not call for any interference. We may now refer to the judgments relied on behalf of the assessee. In N. Swamy (supra), it was observed that statement of the assessee to a third party could not be acted upon unless there was material to corroborate the same. Burden of showing that the assessee had undisclosed income was on the Revenue, which was not discharged by referring to the statement made to the third party.

The judgment relied upon is distinguishable on facts. There is no doubt about the proposition that burden of proving taxability of income is on the Revenue, as held in Parimisetti Seetharamamma vs. CIT (1965) 57 ITR 532 (SC), referred in the above judgment. For discharging the said burden, it is not necessary that some positive evidence must be led by the Revenue. In a given case, even by drawing inference from the material available, if explanation of the assessee is found to be unreliable, claim of the assessee can be rejected. In such situation, burden on the Revenue can be held to have been discharged. In the present case, the assessee had given stock statement to the bank which was at variance with entries in books of accounts.

No doubt, it was a statement to a third party, but neither the said statement was denied by the assessee nor any valid explanation furnished about the discrepancy. On the other hand, the verification from the bank showed that the assessee had excess stock, which justified addition to the income. In these facts, the judgment relied upon is distinguishable. In Chauhan Papers (P) Ltd. (supra), on facts, it was found by the Tribunal that the statement furnished to the bank did not justify the addition. Therein, the assessment was made on the basis of GP rate and there was no discrepancy in figure of purchases or sales.

This Court held that in absence of perversity of findings, no substantial question of law arises for consideration. In the present case, the findings recorded by the Tribunal, reproduced above, have not been shown to be perverse and the said findings justify the additions made by the AO. For above reasons, the questions of law framed by the assessee have to be answered against it. Accordingly, the appeal is dismissed.

Fakir Mohmed Haji Hasan vs Commissioner of Income-Tax on 10 August, 2000

“(1) Whether, on the facts and in the circumstances of the case, the Tribunal was right in law in holding that the assessee had been found in possession of gold valued at Rs. 48.72 lakhs and as such he was the owner of the said gold and the value of the said gold was liable to be included in the income of the assessee because of the fact that no explanation regarding source from which investment in the said gold had been made, had been given by the assessee ?

(2) Whether, on the facts and in the circumstances of the case, the Tribunal was right in law in holding that no deduction in respect of the value of the gold which had been confiscated was allowable from the income of the assessee ?”