‘Technical Error’ on the part of Chartered Accountant can’t be treated as Professional Misconduct: 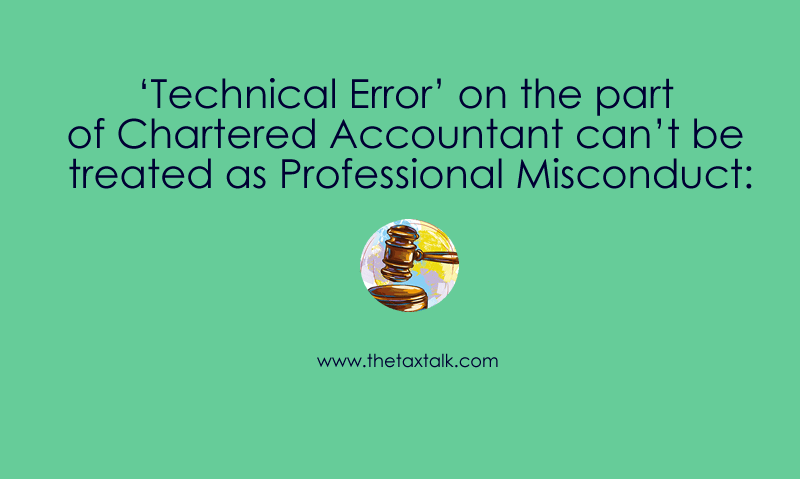 ‘Technical Error’ on the part of Chartered Accountant can’t be treated as Professional Misconduct:
AA The Appellate Authority has recently quashed an order of the disciplinary committee and held that a mere technical error on the part of a Chartered Accountant is not sufficient to treat him guilty of professional misconduct. Satish K. Arora, President & COO of M/s International Asset Reconstruction Company Private Limited, Mumbai lodged a complaint against the appellant, Chartered Accountant. In the complaint, it was alleged that in spite of clearly being in knowledge of facts of an assignment, the appellant has chosen to allow to misrepresent facts and has not disclosed the correct liability of the Borrower Company with respect to IARC. It was said that the said act would amount to professional misconduct.  The disciplinary committee of the ICAI found the above allegation admissible and awarded punishment of removal of name of the Appellant from the Register of Members for a period of one year and also imposed a fine of Rs.50,000/. Before the appellate authority, the appellant contended that the loan towards Axis Bank and IARC were shown as ‘secured loans’ only and their character was not altered and therefore, the true and fair view was not impaired at all and at the worst, it can only be described as a technical error which does not constitute professional misconduct. The appellate authority noted that even the counsel for the ICAI fairly admitted that there is no charge of impairment of true and fair view of financial statements. “We have also observed that the issue of compliance of SA 505 raised by Director (Discipline) in his Prima Facie Opinion has also not been raised by the Disciplinary Committee and appears to have been dropped. Thus no violation of the law has been pointed out in the impugned Order passed by the Disciplinary Committee nor has any charge of impairment of true and fair view been levied. The fact of account of AVFL becoming NPA in Axis Bank is also of no relevance for the purpose of audit either for true and fair view or disclosure. Even there is no charge framed on this account.” Diving deeply into the facts of the case, the appellate authority allowed the contentions of the appellant and held that “it may at worst be a technical error and therefore, it cannot be said that the due diligence was not exercised or there was any negligence, much less gross negligence. Accordingly, we find the appellant ‘Not Guilty’ under clause (7) of Part-I of the Second Schedule to the Chartered Accountants Act, 1949,” the AA said.