Permission granted by CIT cannot countermand mandatory requirement of seeking permission from ACIT so as to validate notice for re-opening of assessment: HC 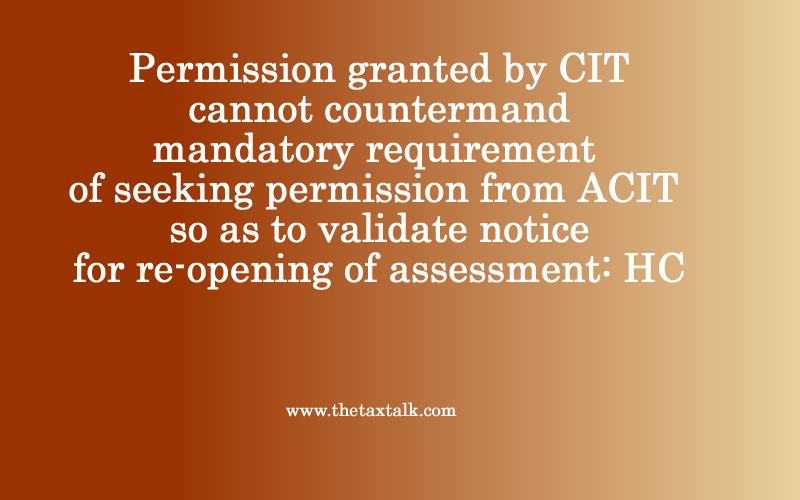 Permission granted by CIT cannot countermand mandatory requirement of seeking permission from ACIT so as to validate notice for re-opening of assessment: HC

MUMBAI,  : THE issue at hand before the Bench is whether permission granted by the CIT will prevail over the mandatory requirement of seeking permission from the Designated Officer being the ACIT, so as to validate a notice of re-opening of assessment. NO is the answer.

The assessee company is engaged in trading in pharmaceutical products. On assessment for the relevant AY, the AO issued notice u/s 148 seeking to re-open assessment for a previous AY. The assessee challenged such re-opening notice on grounds that while permission & sanction for issuing of the notice had to be obtained from the ACIT u/s 151(2), the sanction in fact had been obtained from the CIT. However, such contention was rejected and the assessment order came to be passed. On appeal, the CIT(A) dismissed the assessee’s appeal on grounds that mere seeking of permission from a higher authority would not vitiate the re-opening proceedings. However, the Tribunal set aside such findings on grounds that not seeking approval from the ACIT prior to re-opening of assessment was in contravention of the provisions of Section 151(2).

On appeal, the High Court held that,

++ It is undisputed position before us that in terms of Section 151(2) of the Act, the sanctioning or permission to issue notice under Section 148 of the Act has to be issued by the ACIT. We find that the AO had not sought the approval of the Designated Officer but of the Commissioner of Income Tax. This is clear from the Form used to obtain the sanction. In any case, the approval or satisfaction recorded in the form submitted for sanction of the CIT by the AO reproduced herein, it is clear that the ACIT had not granted permission to initiate reopening proceedings against the Assessee. The view of the ACIT was subject to the approval of his superior – the CIT. Thus, there was no final sanction granted by the ACIT for issuing the notice dated 25th March, 2011 to reopen the Assessment. Further, it is the CIT who directed the issuance of the notice under Section 148 of the Act to the Assessing Officer. Thus, it is very clear that the final sanction & approval was that of the CIT as indicated in the Form and also in the two letters dated 24th March, 2011 and 25th March, 2011; Following the relevant findings laid down by the Bombay High Court in the case of Ghanshyam K. Khabrani v/s. Assistant Commissioner of Income Tax, the the view taken by the Tribunal, cannot be found fault with.