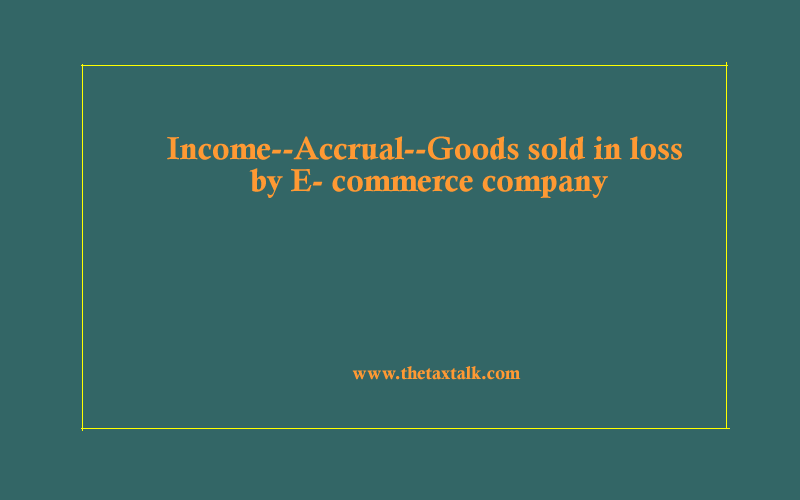 The assessee was a company. During the relevant previous year it was engaged in the business of wholesale trader/distributor of books, mobiles, computers and related accessories. It filed a return of income declaring loss. Assessee was a wholesale dealer and acquired goods from various persons and was immediately selling the goods to retail sellers like WS and others, who subsequently would sell those goods as sellers on internet platform under the name |Flipkart.Com|. The AO further noticed that the assessee has been purchasing goods at say Rs. 100 and selling them to the retailers at Rs. 80. Loss in terms of percentage was 2.52% of the cost of purchase value. The AO was of the view that the action of the assessee in selling goods at less than cost price was not a normal business practice. He therefore called upon the assessee to explain the purpose of selling goods at less than cost price. Assessee explained that sale through electronic form (e-commerce) as against the traditional sale through retail outlets had just begun in 2012. Since e-commerce was in its nascent stage, it was very difficult to create trust and awareness of sale through e-commerce. The volume of sales was very low. The AO concluded that the strategy of selling goods at lower than cost price was to establish customer goodwill and brand value in the long run and reap benefits in the later years. The AO thereafter concluded that the losses incurred by the assessee was to create marketing intangible assets and therefore the loss to the extent it is created due to predatory pricing should be regarded as capital expenditure incurred by the assessee and should be disallowed. Loss declared by the assessee in the return of income filed was converted into positive income by disallowing expenditure.

What can be taxed is only income that accrues or arises as laid down in section 5 of the Act. Nothing beyond section 5 of the Act can be brought to tax. There was nothing to show accrual of income so as to disregard the loss declared by the assessee in the return of income filed. There is no provision in the Act by which the AO can ignore the sale price declared by an assessee and proceed to enhance the sale price without material before him to show that the assessee has in fact realized higher sale price. Loss returned by the assessee has to be accepted and the manner of determination of total income as done by the AO is not in accordance with law