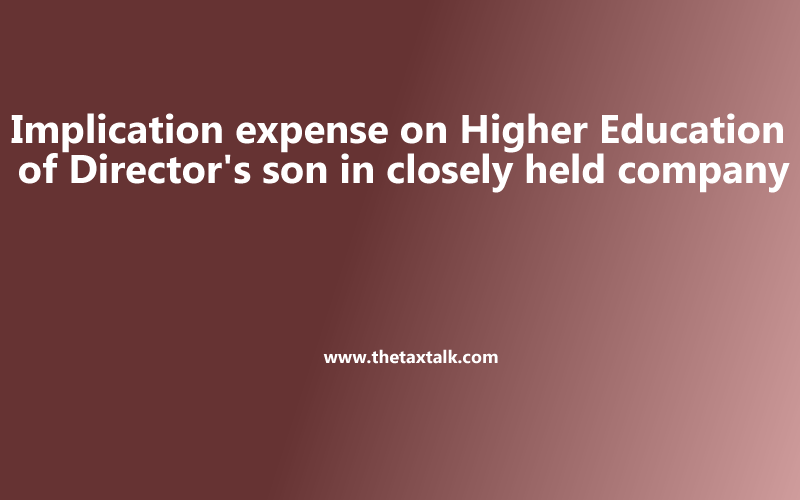 What will be implication of expenditure incurred for education of Director’s son of closely held company? Whether it will be allowed as Management training and development expense to company considering the fact that business will be carried on by director’s son in future?

The similar issue was raised in case of Indian Galvanics Syrium Foils Ltd vs Dy.Commissioner Of Income Tax, Bombay High Court. The court in its judgement on 6th July 2018 concluded that it will not be allowed as as Management training and development expense to company stating the reason that expense incurred is not wholly and exclusively for business.

This Appeal under Section 260A of the Income- tax Act, 1961 (Act) is preferred by the Appellants- Assessee against the order dated 18.10.2001 (hereinafter referred to as ‘impugned order’) passed by the Income Tax Appellate Tribunal (Hereinafter referred to as ‘Tribunal’), Mumbai Bench ‘A’, Mumbai in relation to Assessment Year 1997-98. The Appeal was admitted on 2.9.2014 on the following substantial question of law:

2 The Appellants-Assessee is a closely held industrial company engaged in manufacturing copper foils at District: Gandhi Nagar. Its administrative office is at Mumbai. During the previous year ending on 31.3.1997, the Appellant-Assessee incurred expenditure of Rs.11, 76,540/- under the head ‘Management Training and Development expenditure’. It was incurred for higher education and training of Shri Harsh Kumar who had been sent to USA for course in “Business Administration”. Shri Harsh Kumar is son of one of the directors, Shri Arun Kumar Dalmia.

3 In the course of the assessment, it was explained that expenditure was incurred for the purpose of Appellants’ business, so as to ensure better administration in long run. That, as such Appellants thought it fit to train suitable employee. It is Appellants’ case that an agreement was executed by the concerned employee, who then had committed to serve Appellants-Assessee for ten years. It was brought to notice of the Income-tax Officer that after completing education and training, Shri Harsh Kumar was serving Appellants-Assessee for three years. It is on this premise it was claimed that expenditure then incurred on his education and training was incurred wholly and exclusively for the purpose of business.

4 Explanation given by the Appellants-Assessee was rejected vide assessment order dated 28.2.2000.

5 Aggrieved by the above disallowance, the Appellants-Assessee preferred an appeal before the Commissioner of Income-tax (Appeals,)XLI, Mumbai. The appeal was allowed vide order dated 15.9.2000.

6 Being aggrieved by the order passed by the CIT(Appeals), Respondent No.1 preferred an appeal before the Tribunal on various grounds which was allowed and resultantly disallowance was restored as made by the Assessing Officer.

7 That against the order of the Tribunal, this Appeal is preferred.

10 Mr. Suresh Kumar in support of his submission has relied on following two judgments:

11We have gone through the facts of the case as well as judgments cited by the Appellants as well as by the Revenue.

12 In the case of Sakal Papers Pvt. Ltd. (Supra), dispute was related to expenditure incurred by Sakal Papers on the education of daughter of director in USA. In the given case, daughter of the directors was holding master’s degree in Arts from Pune University with English and French as special subjects and was working in the editorial department of the Sakal Papers since September, 1955 as an apprentice on salary of Rs.50/- per month. After serving Sakal Papers for a period of five years, in March, 1960, directors of Sakal Papers passed a resolution that she should be sent for specialised education in journalism and business administration in a university of good standing in USA which directors believed would be good for the progress of the Paper. She secured a degree from the university of Columbia in journalism and after obtaining practical training once again joined editorial department of the Sakal Papers and was still working with it though there was no agreement between her and Sakal Papers.

Thus, Sakal Papers, claimed deduction of Rs.29,654/- as business expenditure. The Tribunal in the given case disallowed the said expenditure on the ground that there was no commitment, contract or bond taken from trainee. Issue came up before this Court in Income Tax Reference No.49 of 1968 and the following question was referred:

” Whether on the facts and circumstances of the case, expenditure incurred on foreign education of Ms. Parulekar was allowable as a deduction in determining the business profits of the Company for the Assessment Year 1961-

That in the Reference, reasons given by the Tribunal were found unsustainable and as such, Reference was answered in affirmative in favour of the Assessee.

In our view, the facts in the case of Sakal Papers (Supra) were altogether different in-as-much as in the said case, daughter of the director was post-graduate in Arts with English and French subjects and was serving with the company in editorial department nearly for five years before she was sent for the training and further education in journalism. That after securing degree from reputed university in USA, she again started working with department of Sakal Papers. Thus, there was dependable evidence to hold that expenditure incurred by Sakal Papers was for securing better services and for promoting its business.

In the case in hand, Appellants-Assessee is a company manufacturing copper foils. Son of one of the directors was sent to USA for completing course in Business Administration which was ‘general’ in nature and had no direct nexus with the business activities of the Appellant-Assessee. Appellants did not place better particulars on record like, basic qualification of Mr. Harsh Kumar; subjects in which he did his administration course; how such subjects has-had nexus to business activities of Appellant and so on. Though a contract was placed on record whereby Mr. Harsh Kumar had agreed to render his services after completing his education and training, but that itself was not sufficient to hold that the Appellants- Assessee has proved nexus between the expenditure and its business activities.

13 That in the case of Shrinath Motors (Supra) somewhat similar issue fell for consideration before this Court wherein the Appellant-Company had paid fees of Rs.1,75,000/- on behalf of one of its directors for completing course from S.P.Jain Institute of Management and Research. Deduction was claimed for such an expenditure which was disallowed throughout upto Tribunal. Against that order of the Tribunal, Shrinath Motors Private Ltd. had filed an appeal before this Court. While dealing with various contentions, which were almost similar to the case in hand, the Division Bench of this Court after taking survey of various judgments including that of Divyakant C. Mehta (Supra) upheld the orders of Authorities and dismissed the appeal filed by the Appellant. 14 It may be stated that in the case of Divyakant C. Mehta (Supra), the Appellant-Assessee had claimed deduction of Rs.22,25,614/- as expenditure incurred for higher education for his daughter. Justification for the said deduction was that she joined his firm of advocates and had given undertaking that on attending higher qualification and degree from university abroad, she would join firm for minimum period of five years and thus, said expenditure was incurred for the business of the Assessee and was allowable as deduction. Facts of the case in hand are almost similar, in-as-much as son of one of the directors was sent abroad for acquiring degree in ‘Business Administration’ and expenditure incurred for higher education was claimed as deduction which was sought to be supported by contract/agreement which was in nature of commitment of Mr. Harsh Kumar that he would serve Appellants-Assessee after acquiring degree in ‘Business Administration’.

16 That, for the reasons, as stated, here-in-above, we answer the questions in negative i.e. in favour of Revenue and against the Appellants.