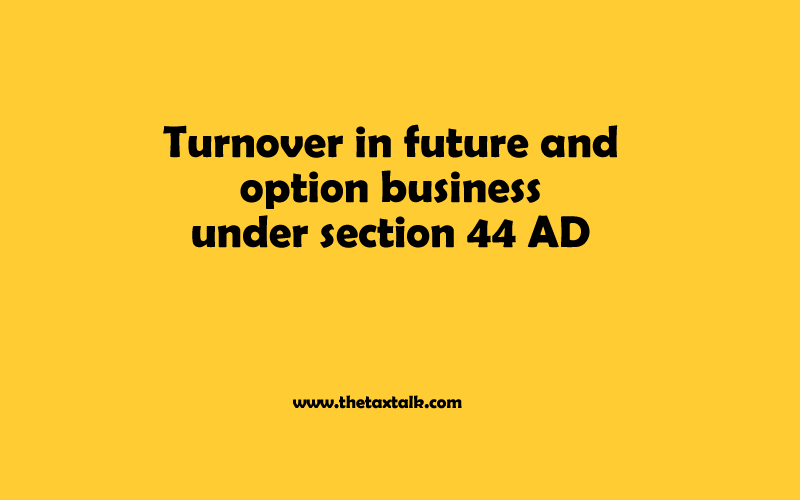 As I read your article regarding 44AD Future & Option business at the following links:
– Loss in F & O transaction – whether tax audit compulsory
– Audit not compulsory even if income offered for taxation is less than 8% or 6% u/s 44AD
It is all very very clear. But I am confused regarding the ‘turnover’ taken in the books in following cases:
1. F and O business.
2. Intra day speculation loss.
As per guidance note, it is stated that turnover is the total of profit and loss without considering the sign. It is worthwhile to not that there is no such definition in act or in govt notification than it can be challenged by the authority .
Now a question arises is how to deal with such type of situation where the total income of assessee are more than the basic exemption limit and loss in speculation and F & O. In my case, profit is less than 8% of the profit plus loss taken together.
Clarify and evidence in support of your answer .
Thanking you- (snsharmabucb@gmail.com)
OPINION-
As far as the turnover is concerned, it is the total of profit and Loss, ignoring the sign thereof.
Since speculative income is taxable under the head “Income from Business, intra day profit and loss would also be required to be grossed up to arrive at the figure of “Turnover.
As mentioned in the query, your income (excluding F & O loss & Intra day share trading loss) is above the basic exemption limit. So, You have to get the books of accounts audited.
Income as mentioned in the query should be the income after (1) set off all inter & intra head adjustment of loss & (2) after deduction under chapter VIA (which includes deduction under section 80C, 80D etc).
It may be noted that that if income is above the basic exemption limit, there is no choice but to get the books audited if the profit is less than 8% of the turnover. It will be so despite the fact that records are justifying the genuineness of the profit & transactions.
Ideally, section 44AD & 44ADA needs an amendments so as to exclude the transactions of F & O and intra-day trading in shares as it is well supported by documentary evidences.  Till any such amendment is carried out. Audit will be the only option with the Taxpayer.