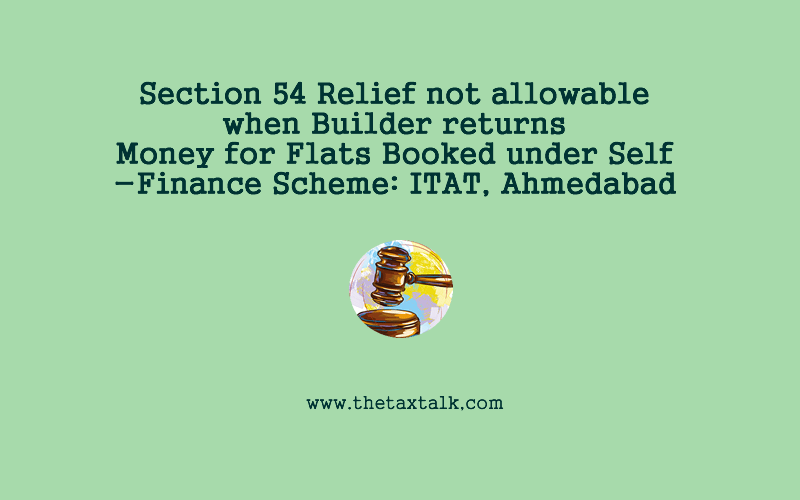 The Income Tax Appellate Tribunal (ITAT), Ahmedabad bench, in Suhas Vasantrao Joshi v. ACIT held that the assessee cannot avail exemption section 54 of the Income Tax Act when the Builder returns money paid in respect of booking of flats under a Self-Finance Scheme. The assessee booked a flat in a scheme launched by “PIPL”. He has made payment through account payee cheque and that concern has issued a receipt to him and he was eligible for section 54 relief for the year 2009-10. However, in a subsequent year, the flat could not be constructed and the builder returned the money to the assessee. As per a CBDT Circular, if an assessee booked a flat under self-finance scheme of DDA or any other similarly situated institutions, then it would be construed that the assessee has fulfilled conditions enumerated in section 54 and would be entitled to the exemption. The Assessing Officer, while completing assessment against the assessee held that since the building could not be constructed and the builder returned the money to the assessee, no relief under section 54 is available to the assessee according to the circular. The bench noted that in the assessment year 2009-10 case of the assessee falls within the ambit of section 54 because the assessee has purchased a house under a self-finance scheme in the same assessment year.

“According to the assessee when he has made payment for the acquisition of new assets, he has fulfilled the conditions enumerated in section 54 as per the circular. Subsequent development of non-construction of the building by the builder and return of money disentitle him for exemption under section 54 of the Act,” the bench said. The bench noted that there was a change in the circumstances. “Certain development has taken place whereby the flat could not be constructed and builder returned the money. This change in the circumstances would disentitle the assessee from claiming exemption under section 54,” the bench said.