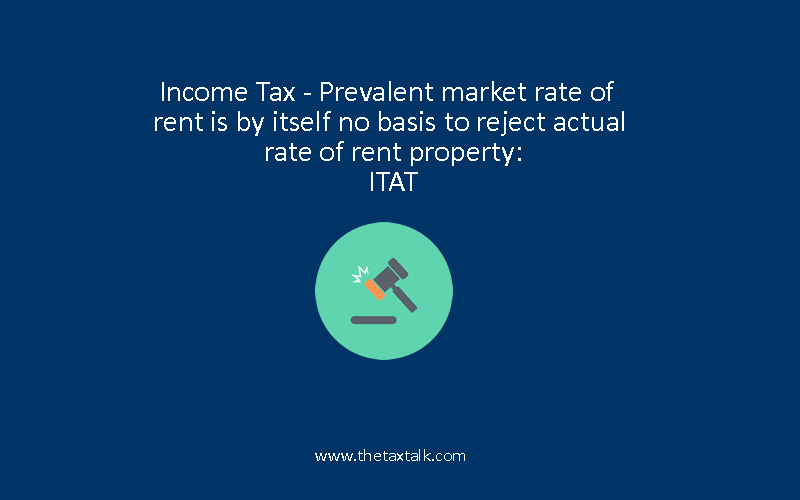 MUMBAI, JUNE 21, 2018: THE issue at hand before the bench is whether rate of rent prevailent in the market is per se basis enough to override the actual rent of a property. Another issue is whether the prevailent rent would prevail over the actual rate without there being any evidence or material showing that the prevailent rate had been suppressed. NO is the answer.

During assessment for the relevant AY, the assessee company claimed that its only activities were by way of investments. In its returns for the relevant AY, the assessee received an amount of rental income which it declared as ‘Business Income’. It acquired tenancy rights of about 1634 sq feet in a particular building. It later leased out a portion of the same to its sister company. Apart from monthly rent, the assessee also received an amount as rent deposit from its sister unit. This rental income was disclosed as ‘Business income’ and the rent paid for the property as well as expenses required for running of the company was claimed as deduction.

The AO completed assessment and passed an order u/s 143(3). Subsequently, the AO reopened the assessment and proceeded to make additions on account of I ncome from House Property. The AO opined that such income was taxable as ‘Income from House Property’, as assessee was to be treated as owner of the house property u/s 27(iiib). The AO also differed with the assessee to treat the actual rent received as the annual value of the property for the purposes of Section 23. The AO also noted that the fair rent of the property was higher than the stated rental. Thereupon the AO calculated the actual rent at a figure considerably higher than that declared by the assessee and also the annual value of the property. On appeal against such findings, the CIT(A) upheld the reopening of assessment as well as the additions made.

++ therefore, there is no justification for the action of the AO in disregarding the actual rent declared by the assessee for the purpose of arriving at the annual value of the property to be taxed u/s 22 of the Act. As a consequence, we set-aside the order of CIT(A) and restore the matter back to the file of the Assessing Officer who shall recompute the income assessable under the head ‘Income from House Property’. Thus, on this aspect, the assessee succeeds.