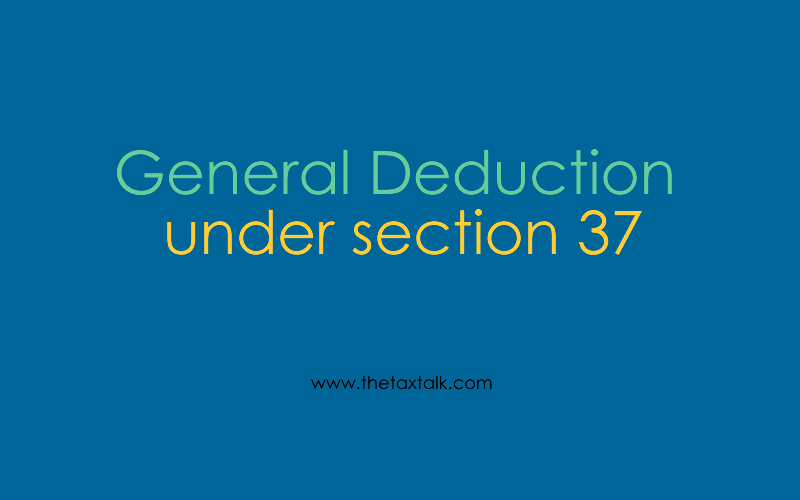 Treatment of expenditure of nature offence and penalty

Any expenditure incurred by an assessee for any purpose which is an offence or which is prohibited by law shall not be deemed to have been incurred for the purpose of business or profession and no deduction or allowance shall be made in respect of such expenditure.Therefore bribes, hafta, protection money or extortion money, etc. paid shall not be allowed as business expenditure under the Head “Profits and Gains of Business or Profession”.

Freebies given to medical practitioner not to be allowed as deduction: The CBDT has issued Circular No. 5/2012, dated 1.8.2012 stating that as the Indian Medical Council had imposed a prohibition on medical practitioners taking any gift, travel facility, hospitality, cash or monetary grant from pharmaceutical and allied health sector industries, the expenditure incurred by the assessee in providing such “freebies” had to be regarded as incurred “for a purpose which is either an offence or prohibited by law” and disallowed under the Explanation to section 37 of the Income Tax Act1961.

Stock of heroin of the assessee doctor was seized as he was found to be engaged in manufacture and sale of the same. The assessee doctor claimed such confiscation of illegal activity stock as a business loss but the High Court held that such deduction is not allowed due to Explanation of section 37. The Supreme Court while reversing the High Court decision held that Explanation to section 37 only deals with business expenditure and has no relevance in regard to loss sustained in business which is deductible on ordinary commercial principles in computing profits. [Dr. T.A. Quereshi v CIT (2006) 287 ITR 547 (SC)].

The redemption fine paid by the assessee to custom authorities for re-exporting the software is compensatory in nature and not penal in nature, as the same was paid in order to free the confiscated goods from the authorities, such amount paid would fall outside the ambit of Explanation of s 37(1) and thus is an allowable deduction. [Usha Micro Process Controls Ltd. v CIT (2013) 218 Taxman 68 (Del)(Mag)]

A whole-time director of assessee-company, had gone on business tour for purchase of tendu leaves where he was kidnapped for ransom by a dacoit. Police was unsuccessful to recover ‘S’ from clutches of dacoits and, ultimately, assessee had to pay ransom money for release of its director. It was held that, amount of ransom money paid by assessee could be allowed as business expenditure as payment of ranson is not an offence covered under Explanation to section 37 [CIT v Khemchand Motilal Jain, Tobacco Products Pvt. Ltd. (2011) 201 Taxman 292 (MP)]

Any expenditure incurred by an assessee on the activities relating to corporate social responsibility referred to in section 135 of the Companies Act, 2013 shall not be deemed to have been incurred for the purpose of business and hence shall not be allowed as deduction under section 37(1).

However, the memorandum provides that the CSR expenditure which is of the nature described in section 30 to section 36 shall be allowed deduction under those sections subject to fulfillment of conditions, if any, specified therein.

Taxes, duty, cess or fee: Any tax, duty, cess or fee paid by the assessee under any law for the time being in force for carrying on the business or profession shall be allowed as a deduction under section 37. However, such deduction shall be subject to section 43B. Some of the taxes, duties, etc. which are allowable are sales tax, import duty, export duty, property tax, motor vehicle tax, municipal taxes, cess, licence fee, professional tax.

The following taxes will not be deductible:

Damages: If the damages arise out of a contract entered into in the ordinary course of the business relating to the trading items, the claim for deduction is, ordinarily, allowable unless it can be proved that the damages were caused by dishonesty on the part of the assessee or that these were akin to penalty imposed for infringing the law or for committing an act opposed to the public policy

Damages paid by way of interest and storage charges for breach of contract for purchase of a capital asset, held not deductible as the same cannot be termed as revenue expenditure. .

Damages paid for delay in supplying goods and materials and/or for supplying materials of substandard quality were held deductible.

Penalties and fines: Penalty paid in the due course of business is allowable as they are not in any contravention of any law.

Infraction of the law is not a normal incident of business and, therefore, no expense which is paid by way of penalty for a breach of the law can be said to be an amount wholly and exclusively laid for the purpose of the business.