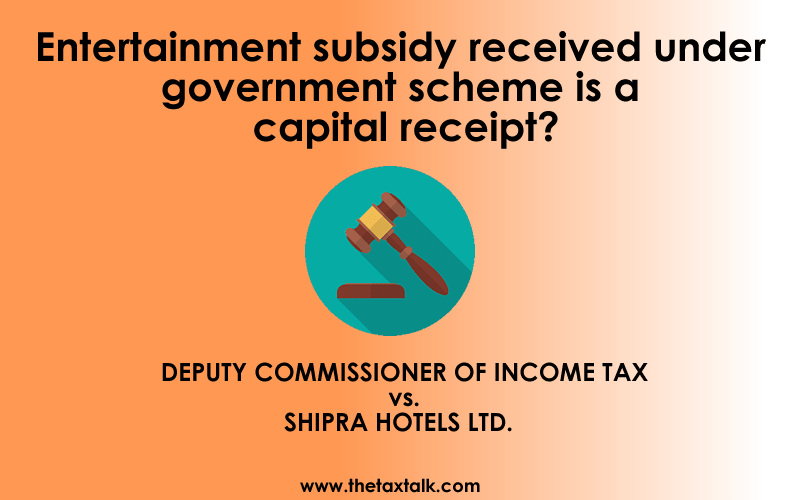 Whether entertainment subsidy received by assessee under government scheme is a capital receipt?

In the case of CIT-1, Kolhapur vs. M/s. Chaphalkar Brothers, Pune (supra) Court held that scheme in question had fallen in the first category i.e. for the purpose of helping the growth of an industry. Though the collection was in the form of an entertainment Duty via sale of tickets for a limited period but its utilization was predetermined and granted with an assurance to cover up the cost of construction. Once it is demonstrated before us that too undisputedly that it was not attributed in any manner towards supplementing of day-to-day expenditure or in the furtherance of the profits than it cannot be said to be in the character of a revenue receipt. Contrary to this it was in the nature of a capital receipt being an incentive to supplement the construction expenditure of new set up of Multiplexes hence in the nature of capital receipt.

Entertainment subsidy received by the assessee under Uttar Pradesh Government Scheme for promotion of construction of multiplexes was, thus, capital receipt. The object of grant of subsidy was in order that the persons come forward to construct Multiplex Theatre Complexes. The idea being that exemption from entertainment duty was granted for 05 years. It is also provided in the Scheme that if the cost is recovered prior to 05 years, for rest of the period, the entertainment tax would be leviable.

As per the Scheme, subsidy equivalent to the cost of building and machinery was allowed to be collected as entertainment tax with the operator/owner of the said Multiplex, being allowed to retain the amount, equivalent to the eligible amount over a period of 05 years. The issue is, therefore, covered in favour of the assessee by the Judgment of the Hon’ble Supreme Court in the case of CIT-1, Kolhapur vs. M/s. Chaphalkar Brothers, Pune (supra).

The Departmental Appeal has no merit and the same is accordingly dismissed. The same findings are relevant in the remaining appeals for the A.Ys. 2009-2010 and 2010-2011. These appeals are also dismissed.

Entertainment subsidy received by assessee under Uttar Pradesh Government Scheme for promotion of construction of multiplexes is a capital receipt.