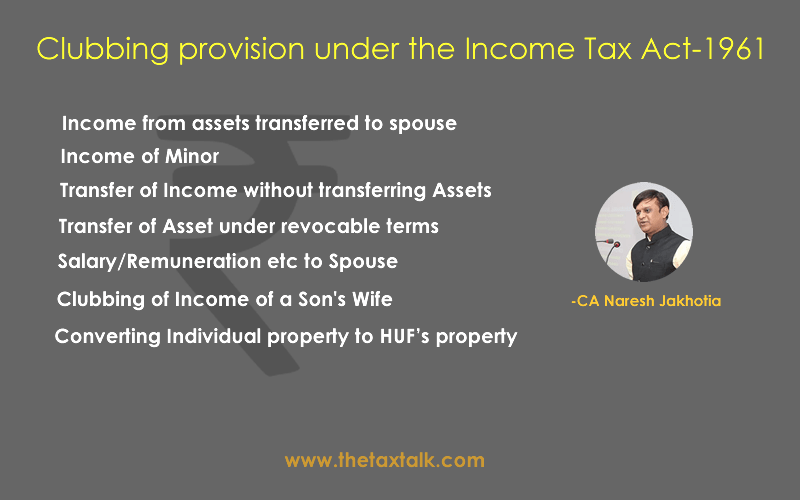 Normally, individual taxpayers are liable to pay the tax on their income alone. However, in certain special cases, income of other person needs to be included in the taxable income of the taxpayer and in such a cases, he will be liable to pay tax in respect of his own individual income as well as income of that other person. Income Tax Act is an interesting piece of legislation which one must know. Ignorance has its own cost & consequences which is too high now.

The situation in which income of other person is required to be included in the income of the taxpayer is referred to as “Clubbing of Income”. The idea behind clubbing provision is to control the tax avoidance by an individual who has a lot of assets & hence is looking to spread to investment in different names. “It’s all in the family’ may be accepted by all but not the taxmen.

Following are the cases where clubbing provisions get invoked:

It may be noted that clubbing provision. As incorporated in section 64 of the Income Tax Act, 1961 applies to first generation of income only. So, if wife invests Rs. 1 Lakh in Bank FDR @ 8% out of the amount gifted by husband then Rs. 8,000/-would be taxable in the hands of husband. Subsequent income out of the investment of Rs. 8,000/- will not be subject to clubbing provision-Popatlal Bhikamchand V. CIT (1959)36 ITR 577 (Bom)].

Gift or Transfer of funds to the family members or investment in their name could be a genuine emotional expression. At the same time, it could be a powerful tool to reduce the overall tax impact as well. However, before using the gift as a tool of tax planning, one must understand the clubbing provision.

[Readers may forward their feedback & queries at taxtalknew@gmail.com]