Adherence to prescribed time-line for issue of certificate of no deduction or deduction of tax at lower rate u/s 197 and 195 of the I.T. Act-1961: CBDT 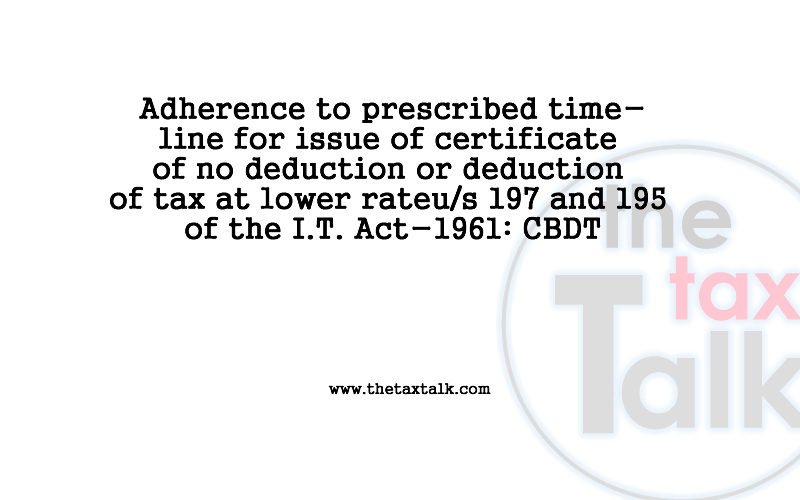 F. No. 275/20/2018-IT(B)
Government of India,
Ministry of Finance,
Department of Revenue,
Central Board of Direct Taxes

Subject: Adherence to prescribed time-line for issue of certificate of no deduction or deduction of tax at lower rate u/s 197 and 195 of the I.T. Act-1961.

The undersigned is directed to refer to the time-line of 30 days prescribed as per the Citizen’s Charter-2014 for issue of certificates for no deduction of tax or deduction of tax at lower rate under section 197 or 195 of the IT Act 1961. Several instances of inordinate delay in issue of such certificates and non-adherence to the said time-line have been brought to the notice of the Board, which have been viewed adversely.

2. In this regard, the undersigned is directed to reiterate that the aforesaid time-line for issue of certificates u/s 197 or 195 of the Act must be adhered to scrupulously. Disposal of applications beyond the said time limit of 30 days must be for justifiable reasons to be recorded in writing and duly approved by CIT (TDS)/ CIT (Intl. Tax) concerned.

3. Any delay without valid reasons will be viewed seriously and CIT (TDS)/ CIT (Intl. Tax) concerned will be held accountable.

This issues with the approval of the Chairman, CBDT.
(Md. Tarique Kalim)
Director (Budget) CBDT.

In case of multiple consignments, for each shipment a separate CHIMS registration no. is required.

Willingness to fill up posts of Inspectors, Executive Assistant, Steno-Gr I, Head Hawildar, Hawildar and MTS at NACIN, Chennai