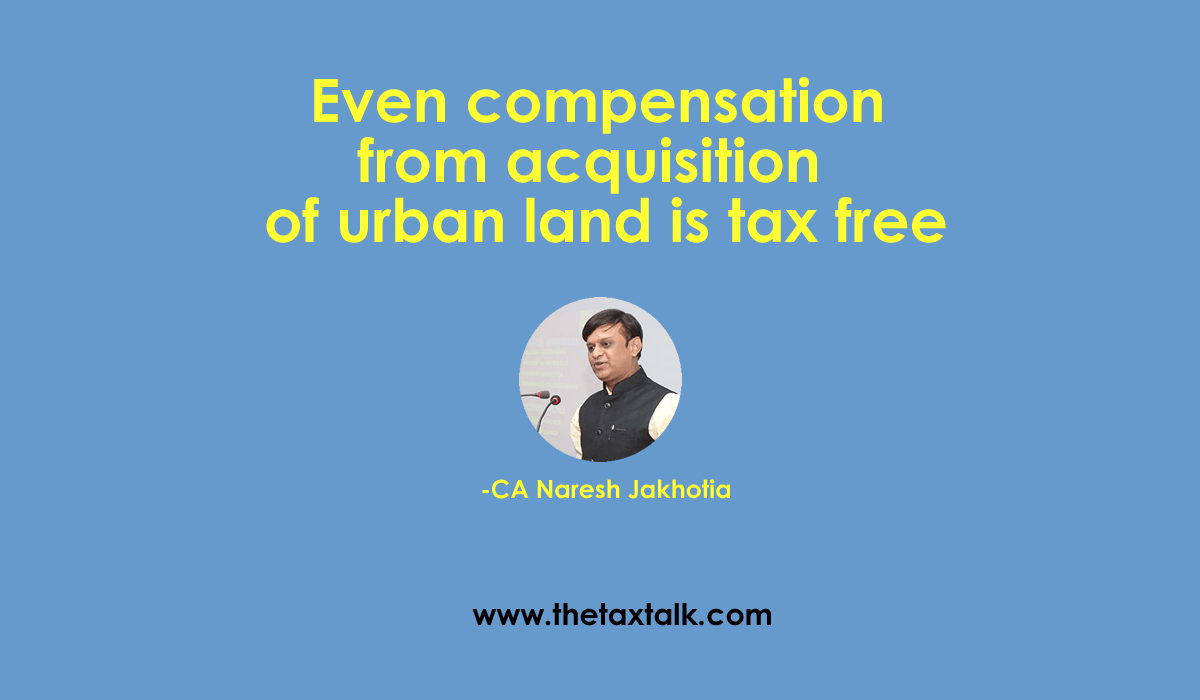 Even compensation from acquisition  of urban land is tax free
Every income is taxable unless and otherwise
1) it is not income within the meaning of Section 2(14) of Income Tax Act-1961
2) It is exempt from tax by virtue of Section 10 or other provisions in the Act.
3) Receipt cannot be categorised as Income.
However, above is the general provision and readability of income is EXCLUSIVELY by the Income Tax Act-1961.
However, there exists an exception to above general rule. Even if income is taxable by virtue of Income Tax Act-1961, still it could be exempt from Income Tax.
Compensation received by the land owners for the land acquired under the Right to
Fair Compensation and Transparency in Land Acquisition, Rehabilitation and Resettlement Act, 2013 (RFCTLAAR Act) is exempt from Income Tax by virtue of overriding provision in the said RFCTLAAR ACT 2013.
Effectively, even if income tax doesn’t specifically exempt it, still it will be exempt from Tax.
Under the existing provisions of the Income-tax Act 1961, only an agricultural land which is not situated in specified urban area, is not regarded as a capital asset. Hence, capital gains arising from the transfer (including compulsory acquisition] of such agricultural land is not taxable. Finance (No, 2] Act, 2004 inserted section 10(37) in the Act from 01.04.2005 to provide specific exemption to the capital gains arising to an Individual or a HUF from compulsory acquisition of an agricultural land situated in specified urban limit, subject to fulfillment of certain conditions. Therefore, compensation received from compulsory acquisition of an agricultural land is not taxable under the Act (subject to fulfillment of certain conditions for specified urban land).
It may ne noted that RFCTLARR Act which came into effect from 1st January, 2014 which in section 96, inter aliaprovides that income-tax shall not be levied on any award or agreement made [except those made under section 46) under
the RFCTLARR Act Therefore, compensation received for compulsory acquisition of land under the RFCTLARR Act (except those made under section 46 of RFCTLARR Act), is exempted from the levy of
income-tax.
Resultantly, now no distinction has been made between compensation received for compulsory acquisition of agricultural
land and non-agricultural land in the matter of providing exemption from income-tax under the RFCTLARR
Act.
Exemption provided under section 96 of the RFCTLARR Act is wider in scope than the tax-exemption
provided under the existing provisions of Income-tax Act, 1961.
The uncertainty in the matter of
taxability of compensation received on compulsory acquisition of land, especially those relating to acquisition
of non-agricultural land is clarified by the Board vide CBDT CIRCULAR NO-36/2016, Dated: October 25, 2016 that
compensation received in respect of award or agreement which has been exempted from levy of income-tax
vide section 96 of the RFCTLARR Act shall also not be taxable under the provisions of income-tax Act, 1961
even if there is no specific provision of exemption for such compensation in the Income-tax Act, 1961.
Now, as a reuslt of Circular No 36/2016, any immovable property compulsarily acquired under RFCTLAAR Act is exempt from income tax act. It absolves the receiver of sum from income tax liability. The copy of the relevant circular is produced hereunder for the easy reference of all.
Income Tax Act don’t operate in a synchronise manner. The provisions contravenes each other at various occasions.
There is a Section 194LA which provides that “any sum” awarded as compensation will be liable for tax deduction.
Present section 194LA needs amendment as it is not in accordance with the spirit of law now.
After Circular no 36/2016, amendment should have been

Done in section 194LA to synchronize with other provisions. Hope, the write ups reaches to some one in CBDT.