Section 133A -An admission of estimated income made during survey has no evidentiary value and is not binding on the assessee. 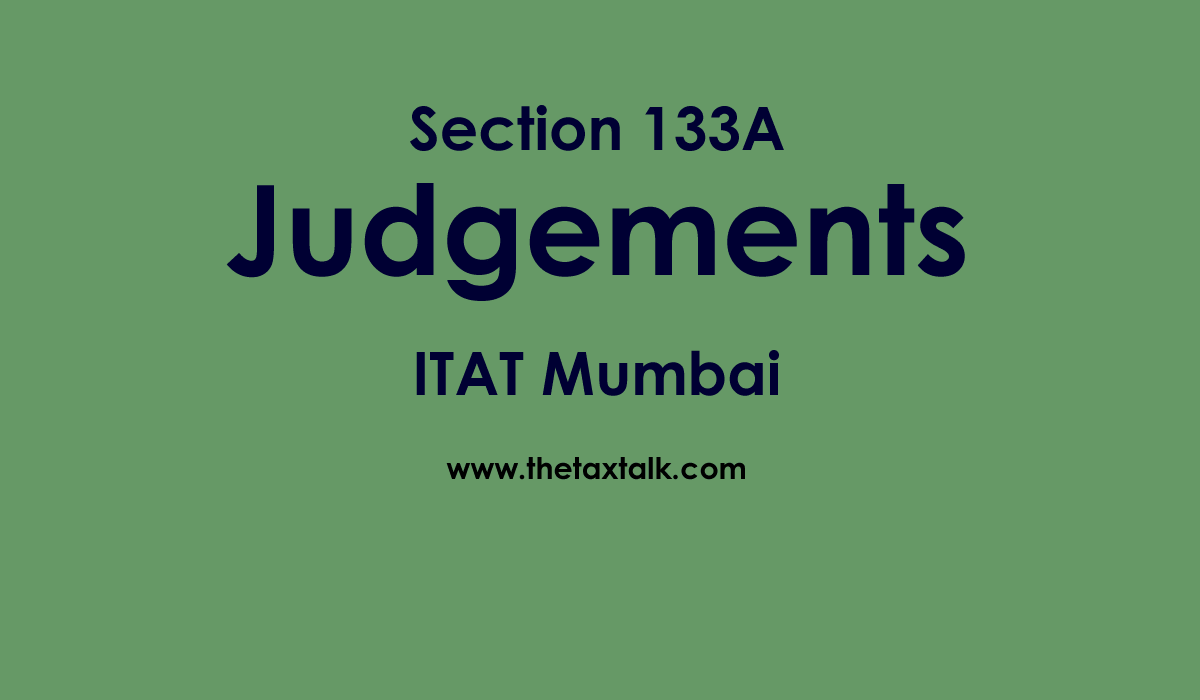 Section 133A -An admission of estimated income made during survey has no evidentiary value and is not binding on the assessee.

(i) We have carefully considered the rival submissions. Insofar as the factual position is concerned, there is no dispute that when the survey action took place on 12.03.2007, the account books of the assessee were incomplete and the returns of income for Assessment Years 2004-05 to 2006-07, i.e. including for the assessment year under consideration, were not filed. It is also not in dispute that the project undertaken by the assessee, namely, “Nikita Enclave” was complete in view of the Occupancy Certificate dated 31.10.2005 issued by the Municipal Corporation. It is also not in dispute between the assessee and the Revenue that the income thereof, on completion of the project, was liable to be declared during the previous year relevant to the assessment year under consideration, i.e. 2006-07.

The manner in which assessee proceeded to offer the income at the time of survey, on an estimate basis has already been reproduced by us in the earlier part of this order. Quite clearly, the estimation is based on the value of the WIP as appearing on 31.03.2003, and the expenses have also been estimated for Assessment Years 2004-05 to 2006-07.

(ii) Now, we may come to the stage when assessee filed his return of income on 29.03.2007, wherein an income of Rs.25,36,440/- was declared. Notably, the return of income was accompanied by the statement of total income, including the audited Balance-sheet and Auditors report prescribed u/s 44AB of the Act.

Broadly speaking, the explanation of the assessee was that the sale proceeds taken in the audited accounts are based on the registered sale agreements executed with the flat buyers and, therefore, the same could not be doubted. So far as the difference in the expenditure was concerned, it was claimed that the amount taken in the audited account was evidenced by vouchers, documents, etc. and, therefore, could not be flawed.

(iii) In the above background, the first point to be seen is whether the Assessing Officer was justified in making the addition merely for the reason that assessee had offered a higher amount of income at the time of survey, which ostensibly was not based on any account books, but was merely an estimation.

The Hon’ble Supreme Court in the case of Pullangode Rubber Produce Co. Ltd. vs State of Kerala & Anr., 91 ITR 18 (SC) recognised the trite law that it was open to the assessee who made the admission to show that it was incorrect. As per the Hon’ble Supreme Court, it was imperative that in such a situation assessee ought to be given a proper opportunity to show the correct state of facts.

In fact, in the case before the Hon’ble Supreme Court, assessee was attempting to show that the entries made by it in the account books did not disclose the correct state of facts. The Hon’ble Supreme Court recognised the right of the assessee to do so on the premise that it was open to the assessee who made the admission to show that the same was incorrect.

In other words, as per the Hon’ble Supreme Court, the admission made on an anterior date, which was not based on correct state of facts, was not conclusive to hold the issue against the assessee. In our considered opinion, in the present case, the stand of the assessee is much more convincing since the original declaration itself is not based on any books of account or supporting documents, but was merely an estimate, whereas the return of income has been filed on the basis of audited accounts and the principal areas of difference, namely, the amount of sale proceeds and the expenditure are duly supported by relevant documents.

The Assessing Officer notes in the assessment order that the books of account and the supporting vouchers were not produced, an aspect which has been contested by the assessee. So, however, even if one is to go along with the said observation of the Assessing Officer, yet, we do not find the same to be of any merit because during the course of remand proceedings directed by the CIT(A), assessee had produced the relevant material, which was thus available to the Assessing Officer for verification.

At the time of hearing, the learned representative had taken us through the statement of expenditure of various assessment years, which was claimed in the audited accounts. Particularly, we find that a major portion of the expenditure is on account of payment of property taxes, water charges and other payments which are duly effected by means of cheques. Be that as it may, we find that there is no adverse finding on the merits of the claim made by the assessee.

Pertinently, at this point we may also state that so far as the sale proceeds adopted in the audited accounts are concerned, the same is based on the agreements of sale entered with the different flat buyers and there is no negation of the same. Therefore, in our considered opinion, the manner in which the declaration was made at the time of survey, which ostensibly was de hors any supporting documents, was not something which could be conclusively held against the assessee in the face of the claims made by the assessee in the return of income, which were based on audited accounts and the supporting documents. Thus, on this aspect, we are inclined to uphold the stand of the assessee.

Pertinently, the Hon’ble Supreme Court in the case of S. Khader Khan Son (supra) has upheld the judgment of the Hon’ble Madras High Court in the case reported in 300 ITR 157, wherein the difference between Sec. 133A and 132(4) of the Act was noted and it was held that the statement u/s 133A of the Act would not have any evidentiary value. In fact, as per the Hon’ble Supreme Court, such a statement made at the time of survey could not be the sole basis for assessing income in the hands of the assessee.

On this aspect, we may also refer to the Circular of CBDT no. 286/2/2003 (Inv.) II dated 10.03.2003, wherein it has been observed that the assessments ought not to be based merely on the confession obtained at the time of search and seizure and survey operations, but should be based on the evidences/material gathered during the course of search/survey operations or thereafter, while framing the relevant assessments. In the present case, apart from the statement at the time of survey, there is no material referred to, which has been obtained during the survey, which supports the estimation of income from the project at Rs.1,00,00,000/-.

In fact, the assessment order does not bring out any material other than the statement of the assessee, which the Assessing Officer gathered during the assessment proceedings which could negate the income deduced by the assessee in its return of income. Therefore, the stand of the ld. DR, in our view, is untenable having regard to the aforesaid legal and fact-position.

(v) The CIT(A) has laid much emphasis on the fact that the retraction by the assessee, which was claimed by way of a letter dated 15.03.2007, was made only on 03.04.2007, and not before. In this context, the CIT(A) also observed that the audit report dated 23.03.2007, which accompanied the return of income, was also “fabricated”. In our considered opinion, the CIT(A) has not appreciated the facts in their proper perspective. Even if one is to discount the date on which the assessee filed the letter of retraction, it goes without dispute that the return of income itself was filed by the assessee on 29.03.2007, based on the audited account books, and we find no reason to affirm the observation of the CIT(A) that the audit report dated 23.03.2007 was fabricated.

Much has been written by the lower authorities on this aspect, but we find that when the entire account books alongwith the supporting documents were available for verification by the Assessing Officer in the remand proceedings, nothing adverse has been brought out. Even the CIT(A) has not found anything amiss with the quality of audited account books or the supporting documents, which were available on record and, therefore, in our view, there was no justification for having rejected the income deduced by the assessee from the project in its return of income. Accordingly, we hereby set-aside the order of CIT(A) and direct the Assessing Officer to delete the addition of Rs. 74,63,557/-.