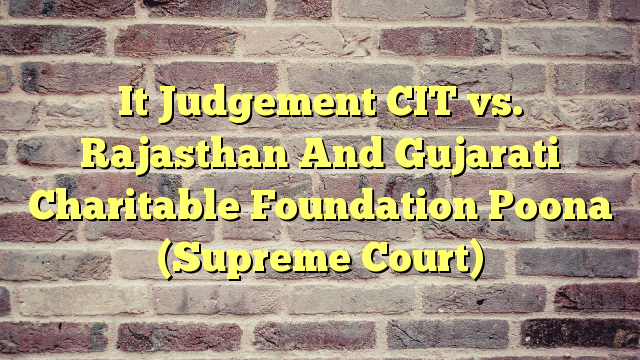 S. 11(1)(a) vs. 32: Even if the entire expenditure incurred for acquisition of a capital asset is treated as application of income for charitable purposes u/s 11(1)(a) of the Act, the assessee is also entitled to depreciation u/s 32. The argument that the grant of depreciation amounts to giving double benefit to the assessee is not acceptable. S. 11(6) which bars depreciation on expenditure applied for charitable purposes is prospective and applies only from AY 2015-16.

These are the petitions and appeals filed by the Income Tax Department against the orders passed by various High Courts granting benefit of depreciation on the assets acquired by the respondents-assessees. It is a matter of record that all the assessees are charitable institutions registere under Section 12A of the Income Tax Act (hereinafter referre to as ‘Act’).

For this reason, in the previous year to the year with which we are concern and in which year the depreciation was claim, the entire expenditure incurre for acquisition of capital assets was treat as application of income for charitable purupos under Section 11(1)(a) of the Act. The view take by the Assessing Officer in disallowing the depreciation which was claim under Section 32 of the Act was that once the capital expenditure is treat as application of income for charitable purposes, the assessees had virtually enjoy a 100 per cent write off of the cost of assets and, therefore, the grant of depreciation would amount to giving double benefit to the assessee.

Though it appears that in most of these cases, the CIT (Appeals) had affirm the view, but the ITAT reverse the same and the High Courts have accept the decision of the ITAT thereby dismissing the appeals of the Income Tax Department. From the judgments of the High Courts, it can be discern that the High Courts have primarily followed the judgment of the Bombay High Court in ‘Commissioner of Income Tax v. Institute of Banking Personnel Selection (IBPS)’ [(2003) 131 Taxman 386 (Bombay)]. In the say judgment, the contention of the Department predicat on double benefit was turn down in the following manner:

“3. As state above, the first question which requires consideration by this Court is: whether depreciation was allowable on the assets, the cost of which has been fully allow as application of income under section 11 in the past years? In the case of CIT v. Munisuvrat Jain 1994 Tax Law Reporter, 1084 the facts were as follows. The assessee was a Charitable Trust. It was registered as a Public Charitable Trust. It was also registered with the Commissioner of Income Tax, Pune. The assessee derived income from the temple property which was a Trust property.

During the course of assessment proceedings for assessment years 1977-78, 1978-79 and 1979-80, the assessee claimed depreciation on the value of the building @2½% and they also claimed depreciation on furniture @ 5%. The question which arose before the Court for determination is : whether depreciation could be deny to the assessee, as expenditure on acquisition of the assets had be treat as application of income in the year of acquisition? It was hold by the Bombay High Court that section 11 of the Income Tax Act makes provision in respect of computation of income of the Trust from the property held for charitable or religious purposes and it also provides for application and accumulation of income.

On the other hand, section 28 of the Income Tax Act deals with chargeability of income from profits and gains of business and section 29 provides that income from profits and gains of business ahll be compute in accordance with section 30 to section 43C. That, section 32(1) of the Act provides for depreciation in respect of building, plant and machinery own by the assessee and use for business purposes. It further provides for deduction subject to section 34. In that matter also, a similar argument, as in the present case, was advance on behalf of the revenue, namely, that depreciation can be allow as deduction only under section 32 of the Income Tax Act and not under general principles. The Court reject this argument.

It was held that normal depreciation can be considered as a legitimate deduction in computing. The real income of the assessee on general principles or under section 11(1)(a) of the Income Tax Act. The Court rejected the argument on behalf of the revenue that section 32 of the Income Tax Act. Was the only section granting benefit of deduction on account of depreciation. It was hold that income of a Charitable Trust derive form building, plant and machinery. And furniture was liable to be compute in normal commercial manner although. The Trust may not be carrying on any business and the assets in respect whereof depreciation is claim may not be business assets. In all such cases, section 32 of the Income Tax Act. Providing for depreciation for computation of income derive from business or profession is not applicable.

However, the income of the Trust is require to be compute under section 11 on commercial principles after providing for allowance for normal depreciation and deduction thereof from gross income of the Trust. In view of the aforesatat judgment of the Bombay High Curt, we answer question No. 1 in the affirmative i.e., in favour of the assessee and against the Department.

4. Question No. 2 herein is identical to the question which was rais before the Bombay High Court in the case of Director of Income-tax (Exemption) v. Framjee Cawasjee Institute [1993] 109 CTR 463. In that case, the facts were as follows: The assessee was the Trust. It derived its income from depreciable assets. The assessee took into account depreciation on those assets in computing the income of the Trust.

After hearing learn counsel for the parties. We are of the opinion that the aforesaid view take by the Bombay High Court. Correctly states the principles of law and there is no need to interfere with the same.

It may be mention that most of the High Courts have take the afore say. View with only exception thereto by the High Court of Kerala. Which has take a contrary view in ‘Lissie Medical Institutions v. Commissioner of Income Tax’.

It may also be mention at this stage that the legislature. Realising that there was no specific provision in this behalf in the Income Tax Act. Has make amendment in Section 11(6) of the Act vide Finance Act No. 2/2014 which became effective from the Assessment Year 2015-2016. The Delhi High Court has take the view and rightly so, that the say amendment is prospective in nature.

It also follows that once assessee is allow depreciation, he shall be entitle to carry forward the depreciation as well. For the aforesaid reasons, we affirm the view take by the High Courts in these cases and dismiss these matters.