Avoid investing in Bitcoins !! Be Cautious!! 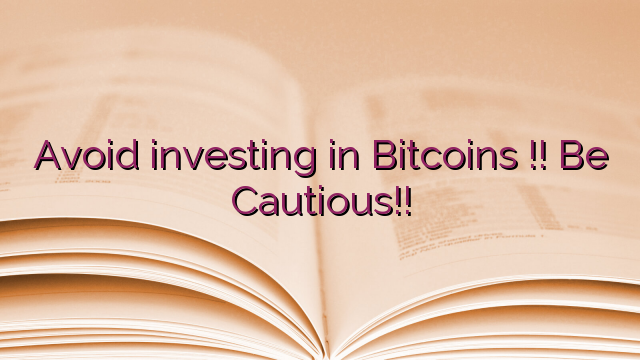 Government Cautions People Against Risks in Investing in Virtual ‘Currencies’; Says VCs are like Ponzi Schemes

The Ministry of Finance has issued the following statement today on Virtual ‘Currencies’.

“There has been a phenomenal increase in recent times in the price of Virtual ‘Currencies’ (VCs) including Bitcoin, in India and globally. The VCs don’t have any intrinsic value and are not back by any kind of assets.

The price of Bitcoin and other VCs therefore is entirely a matter of mere speculation resulting in spurt and volatility in their prices. There is a real and heighten risk of investment bubble of the type seen in ponzi schemes which can result in sudden and prolonged crash exposing investors, especially retail consumers losing their hard-earn money.

Consumers need to be alert and extremely cautious as to avoid getting trapp in such Ponzi schemes. VCs are store in digital/electronic format, making them vulnerable to hacking, loss of password, malware attack etc. which may also result in permanent loss of money.

As transactions of VCs are encrypt they are also likely being use to carry out illegal/subversive activities, such as, terror-funding, smuggling, drug trafficking and other money-laundering Acts.

VCs are not back by Government fiat. These are also not legal tender. Hence, VCs are not currencies.

These are also being describ as ‘Coins’. There is however no physical attribute to these coins.

Therefore, Virtual ‘Currencies’ (VCs) are neither currencies nor coins.

Persons dealing in them must consider these facts and beware of the risks involved in dealing in VCs.

The users, holders and traders of VCs have already been cautioned three times. In December, 2013, February, 2017 and December, 2017, by Reserve Bank of India about the potential financial. Operational, legal, customer protection and security related risks. That they are exposing themselves to by investing in Bitcoin and/ or other VCs. RBI has also clarified that it has not given any licence/ authorization to any entity/company to operate such schemes or deal with Bitcoin or any virtual currency. The Government also makes it
clear that VCs are not legal tender and such VCs do not have any regulatory permission or protection in India. The investors and other participants therefore deal with these VCs entirely at their risk and should best avoid participating therein.”

Did you know about the scope of work for a CPA in India and abroad?

What should be the Basic exemption limit?

CHECK IF YOUR DEPOSIT IS ILLEGAL

Charity paid at the time of purchase cannot form the part of Purchase consideration: Supreme Court

One More : AO cannot make disallowance resulting into a total disallowance u/s 14A, which is more than the exempt income

Changes in Tax Audit Report – just 2 months before the Due Date !!

No due date extension: CBDT

ULIP or Mutual funds- where to invest?

How your small business can benefit from an audit?

Why do people fear to invest in the stock market?