Senior citizens are exempt from payment of advance tax 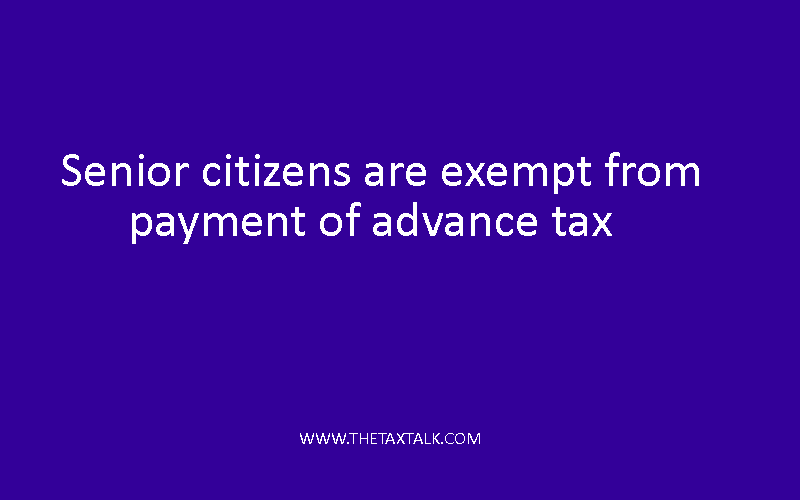 I am a Senior Citizen, Tax Payer, having income from Central Civil Pension and Bank Interest (Savings and Fixed Deposits). To obviate delay, several visits to Bank and other hassles in obtaining Form 16(1)-TDS Certificate, I propose to pay full amount of TDS due by paying in one installment at the beginning of Financial year as Advance Tax by Challan and then file form 15H at the Banks, as TDS also is treated as Advance Tax.  I can quote Challan No. in I.T. Return instead of TDS No., while e-filing ITR. Kindly advice if it is permissible?  [S.V.Mohanan Unnithan, Sr. Citizen, Amravati-gbdeshmukh21@rediffmail.com]

In your case, it appears that you would not be satisfying the pre-condition for submission of Form No. 15H. Though you would be duly discharging your tax liability by making tax payment well in advance, still declaration in Form No. 15G by you would be considered as false declaration & could be subject to penal consequences. The reasons pointed by you may be genuine but submission of form No. 15G would not be proper.
[Note: (i). Now a days, all the TDS by the banks & other payers gets duly reflected in Form No. 26AS of the payee. So, even if the TDS certificate is not collected by the payee, the TDS credit would still be available to the payee.
(ii). Senior citizens carry special privilege in the form of exemption from payment of advance tax if they don’t have any income chargeable under the head “Profits and gains of business or profession”. In short, senior citizens without any business income are not required to pay any advance tax. But, they are not eligible to make the declaration in Form No. 15G if their income (even after chapter VI A deduction) involves self assessment tax payment.]
Query 2]

1.      Dividends received from M/F units/shares are exempt from income
tax but maturity amounts received after 3/5 years on redemption, which
amount is to be shown as exempt income full amount or only the
profit amount in that year of redemption?

2.      From own savings, an amount have been given to both wife and
major son who is a student and they subsequently kept the amount in
joints savings bank / FDR account where my name is kept as second
holder in E/S mode of operation, in this case, interest received or
accrued will be counted in whose income, as they both are non filers
due to income is below taxable limit.

3.      Senior citizen having income from pension/bank interest on FDR &
savings account and also sometimes deals in intraday/delivery based
share trading, in such a case which ITR form is to be used and whether
any advance tax is payable?