Claim Tax Credit on Foreign Income of a Resident 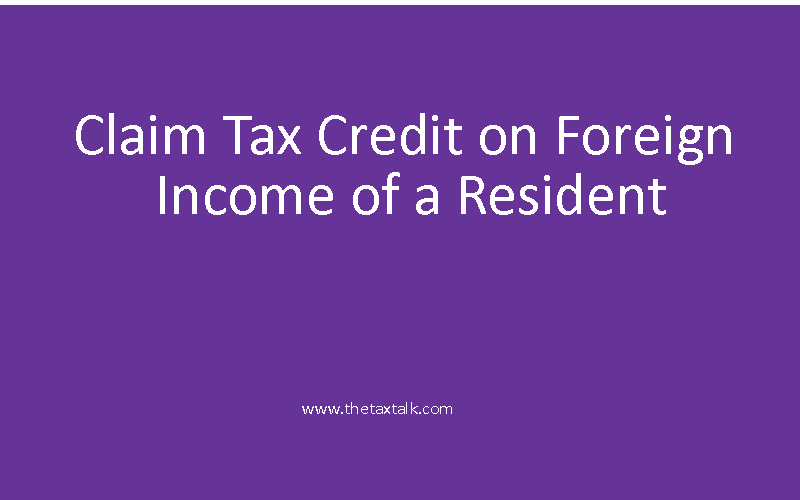 I have the following queries:

In the present era of globalization, education, business or talent knows no geological limits and crosses all the borders. This has resulted in tax complications as well. Every nation has solemn right to tax not only the benefit earned on its land but also on the global income of its citizens. As a result, few incomes would result in taxation, more than once. To avoid the hardship caused by double taxation of same income in two countries, Double Tax Avoidance Agreement (DTAA) is signed by various countries which make sure that taxpayer is not adversely affected by it.  Normally, under DTAA, there are two methods to offer the tax relief – exemption method and tax credit method. Under exemption method, income is taxed in one country and exempt in another. In tax credit method, where the income is taxed in both countries, tax relief can be claimed in the country of residence.

Coming to specific issues raised in the query, it may be noted that

1] Indian has signed DTAA with France [Notification No. G.S.R. 681(E), Dt. 07.09.1994]. Though your honorarium income though would be subject to Tax Deduction at Source (TDS) at France, you would be able to get the credit for the same in India while filing your income tax return. [It is presumed that your status is Resident only and so your global income is taxable in India. If your status is non-resident, then income earned outside India would not be taxable in India).

2] DTAA also provides for tax credit if income is subject to Deduction of Tax at Source (TDS) in the country where the income originates.  The Central Board of Direct Taxes (CBDT) has notified Foreign Tax Credit (FTC) Rules 128 under the Income-tax Rules, 1962 (the Rules) [vide its Notification No. 54/2016 dated 27 June 2016] laying down broad principles and conditions for computation and claim of foreign taxes paid in overseas countries by resident taxpayers.  The taxpayers shall be required to furnish following documents on or before due date of filing of tax return under the Act:

a] A statement of foreign income offered to tax and the foreign tax deducted or paid on such income in Form No. 67; and

b] Certificate or statement specifying the nature of income and foreign tax deducted or paid:
– From the tax authority of the foreign country; or

– From the person responsible for deduction of such tax; or

– Signed by the taxpayer accompanied by proof of tax payment and/ or proof of deduction.

3] Furnishing the certificate to avoid TDS will not be possible under DTAA. TDS credit in India at the time of filing the return would be the only option.

[It may be noted in this connection that exemption is available only if compulsory acquisition has taken place on or after 1-4-2004. Exemption is also available if acquisition has taken place before 1-4-2004 but compensation has been received on or after 1-4-2004. For the purposes of section 10(37), compensation or consideration includes the compensation or enhanced consideration or further enhanced by any court, tribunal or other authority].

Any acquisition by local improvement trust is under an authority of law and resultantly amount received, subject to other stipulations as mentioned above, would be exempt u/s 10(37) of the Income Tax Act-1961.