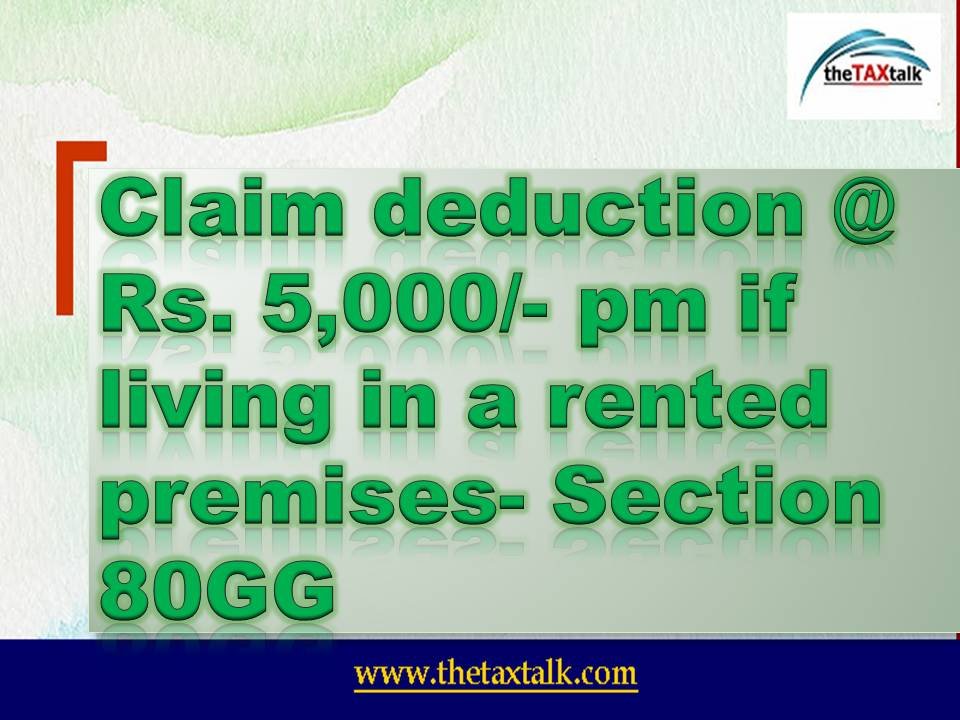 I am not owning any house as of now and living in a rented premises. Neither me nor may parents have any house property. My old property was dispos off by my father during his life time. I am working as an independent catering contractorship. Whether the rent paid by me would be deductible from all my income which I am receiving after tax deduction (TDS). I have read in your column about the deduction of rent payment. Please advise. [rvde********@gmail.com]

Taxpayers who don’t own a house and are staying in a rented premise are eligible for deduction u/s 80GG of the Income Tax Act towards rent Payment. Not aware of the deduction conferred by section 80GG, many individual (whether salaried or businessmen) end up paying higher tax than otherwise they would have been liable to pay.

The conditions for claiming deduction under section 80GG are as under:-
a] Individual has to prepare a declaration in Form No.10BA.
b] Individual or his minor child, spouse or HUF of which he is a member, should not be owner of a house at the place where he ordinarily resides or performs his duties; or he should not be owner of any house at any other place, the income therefrom is to be determined under section 23(2) (a) or, as the case may be, under section 23(4) (a) (i.e., income from self-occupied house property).
Amount of deduction – The deduction admissible shall be the lower of the following:
(i) house rent incurred in excess of 10% of “Total Income”; or
(ii) Amount at 25% of “total income”; or
(iii) Rs. 2000 per month. [Rs. 2,000/- is proposed to be raised to Rs. 5,000/- in the recent Union Budget-2016. i.e., From FY 2016-17, Rs. 5,000/- would replace Rs. 2,000/-]
[Note: The term “Total income” means total income after allowing all deductions expect the one provided under this section itself. In case of salaried assessee who is in receipt of HRA from the employer, no deduction u/s 80GG is admissible. However, they can claim deduction u/s 10(13A) of the Income Tax Act-1961.]

In your specific case, if all other conditions are satisfied, you can claim deduction u/s 80GG by paying the house rent.

My employer is to pay out some arrears, received from an outside source. The money is already in their possession and they are in the process of calculating individual amounts. Thus, the disbursal is likely to be in next FY. The money is receivable in present FY ,but will be received in the next FY. Is it compulsory to pay the IT on this amount in present FY? [Suvimal Dutta, Bhilai – drsdutta1@gmail.com]

I have resigned a company and I have claimed my EPF. The same amount is invested in FD. So, am I liable to pay IT on the interest earned on EMF amount by FD? [Nitin Ranade-ranade.shel@gmail.com]

Limit of Rs. 5,000 applicable on interest income to report in Statement of Financial Transactions (SFT) by the reporting entities abolished