Whether gift from relatives are really tax exempt? 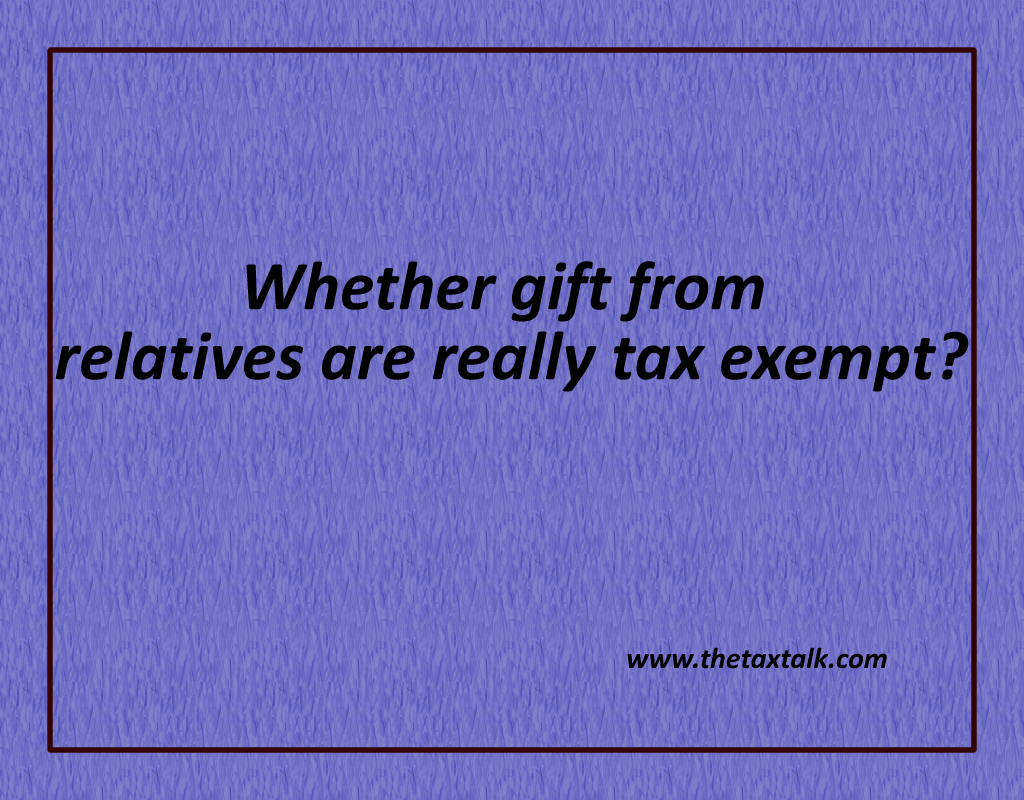 Query 1]
I have a query on gift tax. How do we ascertain whether the gifts are tax free or taxable? Which relatives are exempt and which ones are not? Is it that if the gift received by son from aunty is exempt, vice versa gift would also be tax free because relations between two people should be similar from either side? Is there a ready reckoner or any definitions that we can read which can clarify this matter? Do let me have your view and feedback on the same. [Nandkishor Buty- nandubuty@gmail.com]
Opinion:
“Gift is not only a symbol of love & affection but also a tool for tax planning.”

Gift tax was abolished few years back. The concept of taxing gift was subsequently reintroduced in the legislature by incorporating section 56(2)(vii) in the Income Tax Act-1961 making it taxable as “Income from other Source”.

Gift is used as a tax planning device by many taxpayers for the sake of reduction of tax impact. By gifting the property or assets to other persons, subsequent incomes also get diverted. Undoubtedly, gift is one of the most powerful weapons for tax planning but it is subject to the following:
1. Gift shall be taxable under head “Income From Other Sources“ if the aggregate amount of gift during the year exceeds Rs. 50,000/-, except in respect of gift received:
a. from a “Relative”
b. on the occasion of the marriage of an Individual
c. under a will or by way of inheritance
d. in contemplation of death of the payer.

2. As mentioned above, gift shall not be taxable as income if it is received from the “Relative” as mentioned in section 56(2)(vii) of the Income Tax Act-1961.

4. In short, gifts of any amount received from above “relative” would not be taxed & that’s the reason why an individual recipient have to ensure that the person who is giving the gift falls within the four corners of the word “Relative” as mentioned above, else the receipt could end up being taxed if aggregate amount of gift during the year exceeds Rs. 50,0000/-.

5. Though the meaning of the word “Relative” appears to be simple, it may not be so. One needs to be very cautious at the time of receiving the gift. At each & every occasion, the transaction of gifts needs to be examined from the angel of recipient. In regular usage, “Relative” is considered to be a cohesive term. If “X” is the relative of “Y”, it is presumed that “Y” is the relative of “X”.

Taxpayers would be surprised to see the abnormal outcome of above definition of “Relative” under section 56(2) (vii) of the Income Tax Act-1961. It may so happen that “X” is the relative of “Y” but “Y” may not be the relative of “X”.
For example, if the person is giving a gift to sister’s son then we have to view the transactions from the angel of the recipient (i.e. Son– Bhanja). The transactions of gift here is as under:

In this case, the gift received by Son of sister (Bhanja) from Brother of Mother (Mama) would not be taxable in accordance with clause (iv) mentioned above.

Now, if suppose the reverse happens. The sister’s son (Bhanja) offers the gift to the mother’s brother (Mama) as under:
[Son of sister (Bhanja) ——— Brother of Mother (Mama)]

It can be seen from the above examples that even though the persons involved are same in both the illustrations given above, the amount would be tax neutral in the first case and taxable in the second case.

To summarize, taxpayer need to go through the given definition of “relative” from the angel of recipient i.e., donee and may conclude that relative could be one sided business as far as tax treatment under section 56(2)(vii) is concerned.

Another question that is commonly raised by taxpayers is with regard to the tax treatment of the gift amount received from Nana or Nani. Would it be tax free?
As already mentioned, any gift received from lineal ascendant / descendant is not taxable. Lineal ascendant or descendant is nowhere defined under the Income Tax Act-1961. In normal reference, the term is meant to indicate lineal movement of relationship on the paternal side, upwards and downwards.

However, a closer analysis of few dictionary meaning of the word indicates a wider movement on the paternal side as well maternal side. Though the other view could be taken by department, in my considered opinion gift from grandfather or grandmother from maternal side (i.e., Nana & Nani) would fall within the meaning of word “Relative” and the amount received from them would be exempt. [Reference: Oxford Large Print dictionary & Law Lexicon (General Editor: Justice Y.V. Chandrachud)].

[Before resorting to gift as a tax planning tool, taxpayer need to understand that there is a income clubbing provision in the Indian Income Tax Act-1961. As a result of income clubbing provision, where an asset/property is transferred by an individual to his spouse or minor Child or Daughter-in-law, directly or indirectly, otherwise than for an adequate consideration, any income from such asset is deemed to be the income of the transferor by virtue of section 64(1A) / 64(1) (iv) / 64(1)(vi) of the Income Tax Act-1961.

Effectively, even if the property or assets is gifted by a person to his spouse, still rental or other income would be treated as the income of the donor pursuant to clubbing provision. It may be noted that income clubbing provision is not applicable if a person gift the amount/property to father/mother/major son-daughter, Brother, Sister etc.]

Tags: “Gift is not only a symbol of love & affection but also a tool for tax planning.”Section 56(2)(vii) of the Income Tax Act-1961 considers