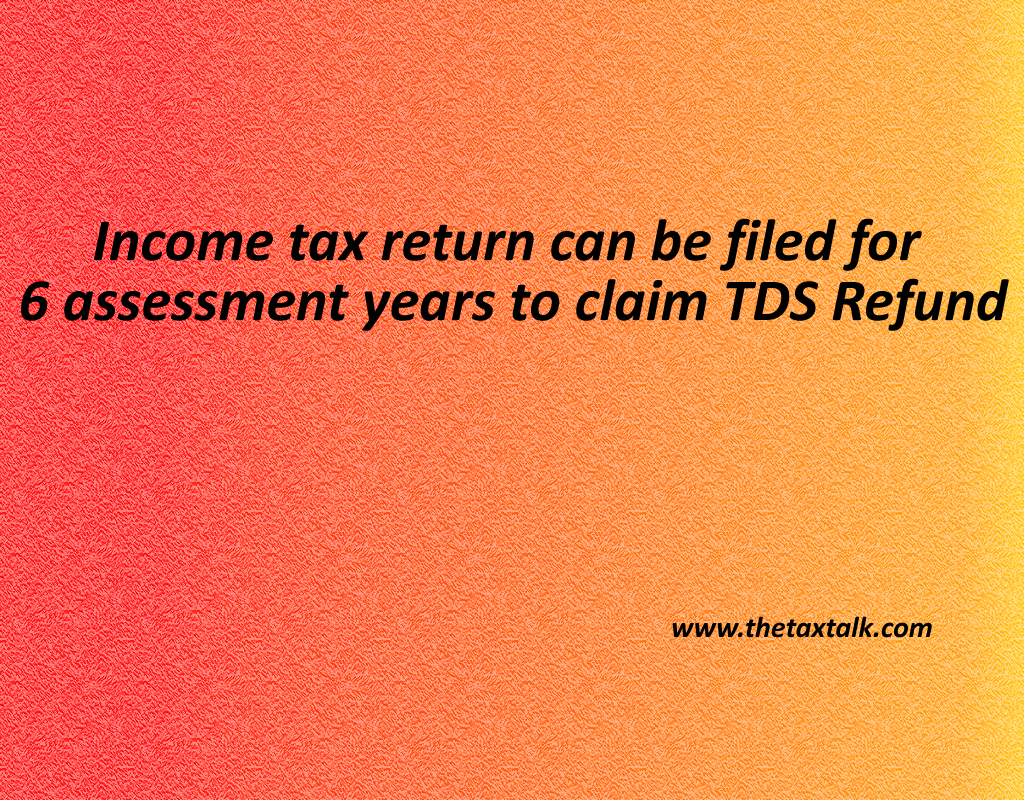 I seek your guidance in knowing the time limit for claiming the TDS recovered by the Bank in the Financial Year 2012-2013 (Asst. year 2013-2014). My daughter is having Fixed Deposit Account in Bank of Baroda, Nagpur. In the F.Y.2012-13, the Bank had paid the Interest on this FDR amounting to Rs. 7,076/- and at the same time deducted an amount of Rs. 2,764/- towards TDS. I could not file I.T. return because that was the only income for her during that F.Y. and she was not required to file the return of income. I would like to know whether she can file the return and Claim the refund of TDS amount? If there is any time limit, what is the limit?  [tribhuwanmeshram@gmail.com]

In case of Fixed Deposits (FD) with maturity period with spread of more than one financial year, lot many taxpayers comes to know about the TDS (Tax Deducted at Source) done by the bank at the time of maturity only. The problem in claiming a refund arises in such cases as the Income Tax Act allows taxpayers to file the return of income up to a maximum of 2 previous years. So, if the TDS pertains to earlier years (beyond 2 years), technically return of income could not be filed by the taxpayer.

It doesn’t mean that taxpayer needs to forget the amount of refund. Claiming refund beyond last 2 years is no more a nightmare. Circular No. 9/2015 [F.NO.312/22/2015-OT, dated 09.06.2015] issued by Central Board of Direct Taxes (CBDT) enables taxpayer to file the Income Tax Return for last 6 Assessment Years. Taxpayer need to note following crux incorporated in the circular for claiming refund beyond 2 years:

In short, taxpayer can claim TDS refund up to last 6 Assessment Years subject to approval from the competent authority.

I am individual, aged 73 years. I submitted form 15H in April 2015, on the basis of estimated income from interest on FDs etc. My FDs are in 3 different banks. Now in September 2015, I have been asked to provide short term consultancy service leading to income which will push my total income to a level more than the stipulated limit for eligibility to file 15H. Hence I wish to withdraw the Form No. 15H now. Is this permitted? If not, what is required to be done? Since, now income is about to cross the limit, I shall pay advance tax in December 2015. I shall be grateful for your guidance about the website also where I may access latest departmental updates.

Forms 15G and 15H are filed by persons whose incomes are below the taxable threshold, to seek exemption from TDS on interest income. Form No. 15H is submitted by senior citizens, 15G can be filed by an individual whose taxable income is less than the exemption threshold. The CBDT has recently vide Notification No. 76/2015/F.No.133/50/2015-TPL dated 29.09.2015 revamped the procedure for filing of self declaration by individuals in 15G and 15H forms, allowing deductor to file it electronically. The requirement of submitting physical copy of Form 15G and 15H by the deductor to the Income Tax authorities has been dispensed with. The deductor will, however, be required to retain Form No 15G and 15H for seven years. Though the new procedures would put little bit additional procedural burden on the deductor but it would certainly benefit them as they would not be required now to make a physical move to the income tax department for submitting the forms. The revised procedure shall be effective from October 1, 2015.

As far as the issue in the present query is concerned, at the time of making declaration in Form No. 15G, your estimated income during the relevant FY 2015-16 was below the basic exemption limit and resultantly, you have correctly made a declaration at that point of time. However, subsequent unanticipated event has resulted in additional income  and as a result originally envisaged declaration may appear to be in contravention of the law. Though there is no legal provision in the IT Act & rules for withdrawing the form, still it is advisable to withdraw it by writing a letter to the bank and instructing them to comply with the TDS provision in the next quarter. Taxpayers can login at www.incometaxindia.gov.in to keep updated about the latest departmental updates.