NO EXEMPTION FROM LTCG IF PURCHASES HOUSE PROEPRTY OUTSIDE INDIA 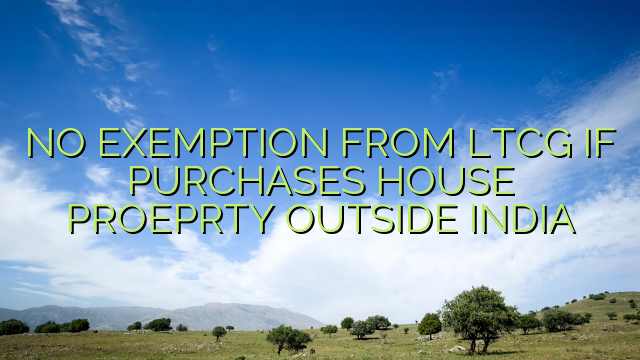 I have a query regarding Capital Gain. My client is NRI. He had purchased a Plot in Nagpur City in the year 1989 for Rs. 10,000/-. In the year 2014, September he has also purchased a residential house at USA for a consideration in Indian currency of rupees 1,00,00,000/-. At the same time in the year 2014, December he has sold the plot which he bought in the year 1989 for total consideration Rs. 60,00,000/-. My Question is that whether he is applicable to pay Capital Gain or Not? If not, why? If yes, why? What is the amount of capital gain? Kindly advise me. [adv.neeleshsharma@gmail.com]

One of my colleagues working in Government institution has the following grievance in getting tax refund from Income Tax authorities. The monthly TDS from his pay & allowances were wrongly remitted in an unknown person’s PAN No. by the D.D.O. of the office for the assessment years from 2009-10 to 2012-13. It is also noticed that the name of the employee is mentioned but Pan No. of some unknown person is shown therein. There was no match of name and PAN no. on the returns of the office.

It is quite acceptable opinion that name and PAN No. are to be match while taking into account of the transaction by I.T. authorities. But their contention is that they need not see and get match the name and PAN No. of the person while making process of the transaction at their level. As a result, a notice of liability of all those TDS remittances of him made on wrong PAN No. as unpaid was issue to him and also the refund determine during process of assessment year 2014-15 has been adjuste against the outstanding demands. Hence, it is requested to kindly advise us for needful action from his side so that his dues to be adjusted and refund will be released. [V.Ravi Kanth-vravikanth7551@gmail.com]

Meaning of “Manufacture” for admissibility of Additional Depreciation

Payment for eviction of tenant is eligible for deduction

Issues in taxation of capital gain

To curb circulation of black money, filing of statement of financial transactions (SFT) has been made mandatory by different categories of taxpayers.

IT department is very efficiently capturing & analyzing the data

No SFT to be filed if there is no reportable transaction

No Income- No Tax is not the law